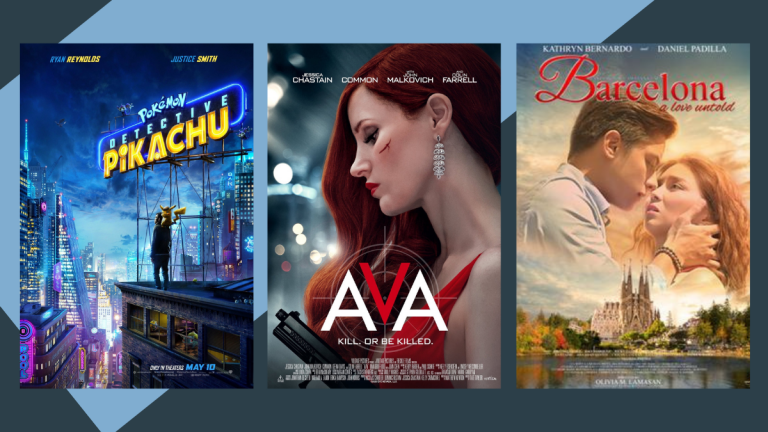 Isn’t it a bummer when you see your favorite movie already playing halfway through when you turn on the TV? Fret not! From rom-com and action to horror and thriller, we’re giving you a heads up on all the must-watch movies on TV from March 1 to 7, 2021.

Barcelona: A Love Untold
(9pm, Cinema One)
While earning a degree in Spain, a young architecture student dealing with grief meets a fellow expatriate trying to escape her past.

The Mall, The Merrier
(1pm, Cinema One)
Two siblings fight for ownership of their parents’ mall.

Pokemon Detective Pikachu
(5:15pm, HBO)
After the demise of his father, Tim travels to Ryme city where he runs into his father’s Pokemon partner, Pikachu. They team up and try to work on the case left unfinished by Tim’s father.

21 Jump Street
(9pm, FOX Movies)
Schmidt and Jenko are high school friends who go on to become police officers. The two friends go undercover as students in order to bust a drug ring and find the source of a synthetic drug.

Baywatch (2017)
(3:25pm, FOX Movies)
Lifeguard Mitch Buchannon and his team discover a drug racket involving businesswoman Victoria Leeds and decide to unearth the truth and bring the perpetrators to justice.

Apollo 13
(3:55pm, Cinemax)
Astronauts Lovell, Haise and Swigert of the Apollo 13 moon mission find themselves stranded when their spacecraft gets damaged. NASA must now find a way to bring them back before it is too late.

Anna
(11pm, HBO)
Beneath a woman’s striking beauty lies a secret that will unleash her indelible strength and skill to become one of the most feared assassins on the planet.

Spider-Man
(4pm, Cinemax)
Peter Parker’s life changes when he is bitten by a genetically altered spider and gains superpowers. He uses his powers to help people and finds himself facing the Green Goblin, an evil maniac.

Johnny English
(7:35pm, HBO)
An evil smuggler plans to steal the Crown Jewels of the United Kingdom. After the country’s top agents are killed, the only remaining hope is Johnny English, a rather unintelligent spy.

Hereditary
(9pm, FOX Movies)
When the matriarch of the Graham family passes away, her daughter and grandchildren begin to unravel cryptic and increasingly terrifying secrets about their ancestry, trying to outrun the sinister fate they have inherited.

Men In Black: International
(9pm, HBO)
Agent M, a probationary member of the MIB, teams up with Agent H and uncovers a sinister plot that reveals a traitor in the organisation aiding an alien invasion.

Brightburn
(9pm, FOX Movies)
Tori and Kyle find a baby boy in a spaceship and adopt him as their own child, Brandon. However, after turning 12, Brandon learns that he has superpowers and begins to use them for sinister purposes.

Spider-Man 2
(11pm, Cinemax)
Peter Parker is dissatisfied with life when he loses his job, the love of his life, Mary Jane, and his powers. Amid all the chaos, he must fight Doctor Octavius who threatens to destroy New York City.

Red
(10:40am, Cinemax)
Frank Moses, a former black-ops agent, learns that his life is under threat from an assassin. In a bid to protect himself, he reunites with his old team to nab the man who has vowed to kill him.

Catch Me I’m In Love
(5pm, Cinema One)
An advocate for the poor begins a rocky romance with the president’s spoiled son while accompanying him on an immersion trip to a rural community.

Ava
(9pm, FOX Movies)
An assassin becomes marked for death by her own black ops organization after questioning orders and breaking protocol.

Snow White And The Huntsman
(11:10pm, HBO)
Queen Ravenna, an evil woman, tasks Eric, a huntsman, with murdering Snow White, her stepdaughter. Instead of killing her, he ends up becoming her protector.