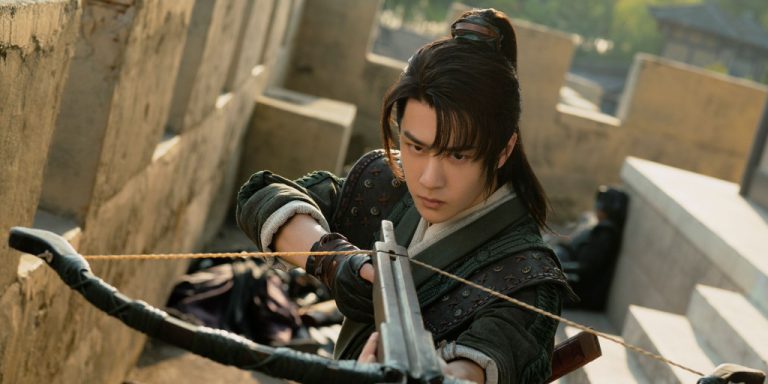 There are Chinese dramas, which win us over with their charm and the cutest of meet-cutes. Then there are Chinese dramas that draw you in with that fantastical combination of stunning costumes, dramatic fight scenes, and moving dialogue in the telling of one epic story. Such is the case in the highly anticipated costume drama The Legend of Fei, which premiered globally this week, and can be streamed exclusively on WeTV. Stream fresh episodes daily for FREE!

Following on the heels of last year’s blockbuster hit series The Untamed, Legend of Fei is also an adaptation of  the novel Bandit by Chinese author Priest. In the titular role of Zhou Fei, a young heroine and warrior, is actress Zhao Li Ying in her first role after going on maternity leave. Her previous roles include starring turns in Our Glamorous Time and The Story of Minglan. Playing her fellow warrior and romantic interest is matinee idol and superstar Wang Yibo, who plays Xie Yun, a warrior prince and martial artist who saves Zhou Fei’s life and joins her on her quest. The 22-year old Yibo achieved international fame when he played one of the leads of The Untamed, which was not only loved by audiences from all over but also expanded into collectibles and makeup lines.

Legend of Fei tells the story of the 48 Strongholds of the Shu Mountains and the warriors and bandits who are sworn to protect it.  Zhou Fei (Zhao Li Ying) is the granddaughter of the man who built the fortress and her family has protected it for generations. The fortress was meant to protect the mortal realm from supernatural threats. Now a young woman, Zhou Fei longs to see the outside world, and has repeatedly attempted to flee. During one of these attempts, she is saved from drowning by a young warrior, Xie Yun (Wang Yibo). Both Fei and Yun find an unlikely friendship and decide to train together.

Before long, they find themselves in the midst of an epic battle with malevolent forces. As their relationship grows, old secrets start to emerge including the mystery behind Xie Yun’s true identity.

This legendary tale unfolds over 50 episodes, and is skillfully produced by Wu Jinyuan, who also led the team behind Princess Agents (also available to stream on WeTV).

To stream Legend of Fei, along with the very best in Asian Premium Content, just download the WeTV app from the App store and Google Play, and start watching! To catch more episodes of this epic adventure, you can subscribe to WeTV VIP at only P59 monthly, quarterly at P159, or annually at P599.