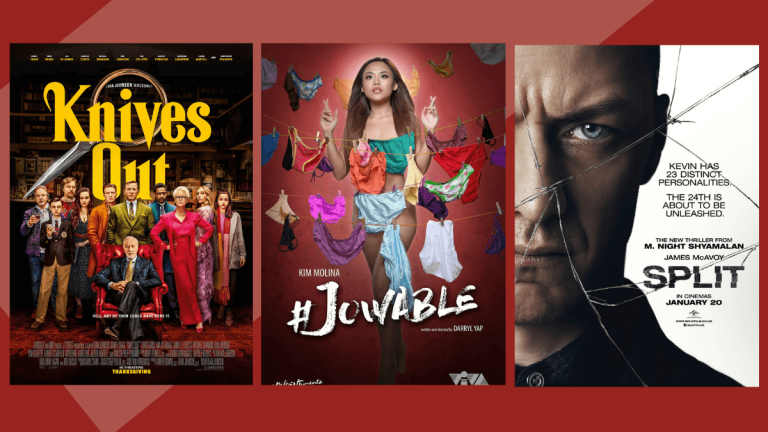 Isn’t it a bummer when you see your favorite movie already playing halfway through when you turn on the TV? Fret not! From rom-com and action to horror and thriller, we’re giving you a heads up on all the must-watch movies on TV from November 30 to December 6, 2020.

Little Fockers
(1:20pm, HBO)
A strict and old-fashioned patriarch, Jack Byrnes, is unhappy with his son-in-law, Greg, when he takes up a second job at a drug company. So, he wants him to prove his capability by testing him.

Split
(3:20pm, FOX Movies)
Kevin, who is suffering from dissociative identity disorder and has 23 alter egos, kidnaps three teenagers. They must figure out his friendly personas before he unleashes his 24th personality.

Exes Baggage
(9pm, Cinema One)
After years apart, a former couple reunites and gets reacquainted with the pains of love as they work to heal wounds from the past.

X-Men: Dark Phoenix
(5:15pm, FOX Movies)
After a mishap, Jean Grey is struck by a powerful ray of energy which she absorbs into her body, turning her into an uncontrollable liability for the X-Men.

Captain America: The First Avenger
(7:55pm, HBO)
During World War II, Steve Rogers decides to volunteer in an experiment that transforms his weak body. He must now battle a secret Nazi organisation headed by Johann Schmidt to defend his nation.

Praybeyt Benjamin
(9pm, Cinema One)
When civil war breaks out in the Philippines, a gay dance teacher is forced to join the military in order to spare his ailing father.

The Intern
(4:55pm, HBO)
Ben Whittaker, a 70-year-old widower, realises that he is not cut out for retirement. He then applies to become a senior intern for a sceptical boss at an online fashion site.

Ant-Man
(9pm, FOX Movies)
Scott, a master thief, gains the ability to shrink in scale with the help of a futuristic suit. Now he must rise to the occasion of his superhero status and protect his secret from unsavoury elements.

Tomb Raider
(10pm, Cinemax)
Lara Croft, a courageous and independent young woman, sets out on a dangerous journey to unravel the truth behind her adventurer father’s mysterious disappearance.

Grown Ups
(3:50pm, FOX Movies)
Five childhood friends take their families for a weekend trip to the lake house, when they reunite in their hometown to attend the funeral of their former high school basketball coach.

It Takes A Man and A Woman
(5pm, Cinema One)
The relationship between Miggy and Laida didn’t last, and neither did Miggy’s business success. When Laida returns to help with a presentation to MET, old feelings come to the surface.

Cats
(5:20pm, HBO)
A tribe of cats must decide yearly which one will ascend to the Heaviside Layer and come back to a new life.

2 Fast 2 Furious
(10pm, Cinemax)
Brian, a former officer, partners with Roman Pierce, his ex-convict friend. As a part of a deal with the FBI, Brian and Roman have to bring down Verone, a drug lord, to erase their criminal record.

Charlie’s Angels: Full Throttle
(4:50pm, Cinemax)
The Angels track down rings containing the names of those in the FBI’s witness protection programme. However, the witnesses begin to get murdered one by one.

Must Be Love
(5pm, Cinema One)
A young woman develops romantic feelings for her best friend, but problems arise when another gal enters the picture.

Frozen II
(5:15pm, FOX Movies)
No matter how happy Elsa is to be surrounded by the people of Arendelle, she finds herself strangely unsettled. After hearing a mysterious voice call out to her, Elsa travels to the enchanted forests and dark seas beyond her kingdom — an adventure that soon turns into a journey of self-discovery.

How To Lose A Guy in 10 Days
(5:30pm, HBO)
Benjamin is challenged by his co-workers to make a woman fall in love with him. On the other hand, Andie has to write an article on how to lose a man in 10 days.

Jowable
(5:30pm, PBO)
Despite being surrounded and supported by friends, Elsa still feels miserable and envious of every couple she sees. Finally, Lady Luck smiles upon her and she meets a guy, and the attraction is instantly mutual.

Sid & Aya: Not A Love Story
(10:30am, PBO)
A successful stockbroker who suffers from insomnia hires a woman to keep him company during his long, sleepless nights.

Deep Impact
(12nn, Cinemax)
According to predictions, a deadly comet is about to strike Earth and destroy humanity. US President Beck devises a strategy to build a network of caves for accommodating one million Americans.

Cars 3
(5:25pm, HBO)
Lighting McQueen, a legendary racer, is overcome by new generation racers. He sets out to prove that he is the best racer in the world with the help of Cruz Ramirez.

Panti Sisters
(7pm, Cinema One)
A father announces to his three sons that he is dying of cancer.

Knives Out
(9pm, FOX Movies)
A detective investigates the death of a patriarch of an eccentric, combative family.

Taken 2
(2:05pm, Cinemax)
Bryan Mills, a former CIA agent, and his ex-wife, Lenore, are taken hostage by a ruthless gang in Albania. However, his daughter Kim helps Bryan break free and rescue Lenore.

Love Actually
(4:30pm, HBO)
Eight London couples try to deal with their relationships in different ways. Their tryst with love makes them discover how complicated relationships can be.

The Gift
(7pm, Cinema One)
A married couple, Simon and Robyn, run into Gordo, an old acquaintance. Things take a turn when Gordo begins to drop in unannounced at their house and inundates them with mysterious gifts.