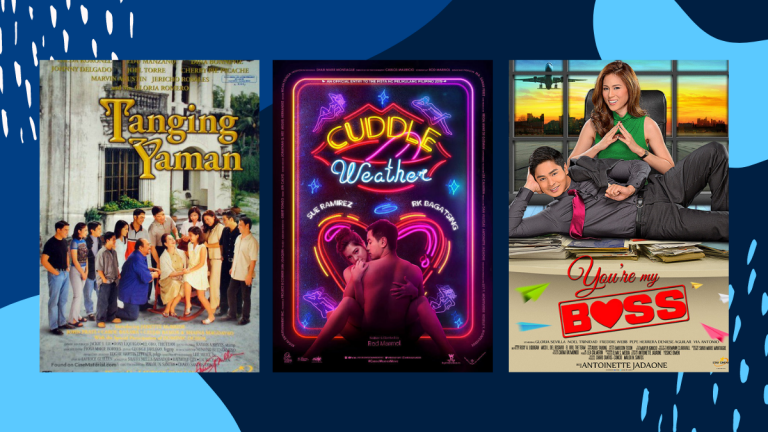 Plan your TV marathon ahead, as we round up Cinema One movies this December 2020:

Two sex workers decide to form a screwy relationship as ‘cuddle partners,’ but soon the two find themselves wanting something more than love-making.

An airline company executive will do everything to close an important deal with foreign investors. In a desperate attempt to win them over, she introduces her assistant as the president.

A young woman gets a job working for a young man with whom she shares a romantic past.

A family torn apart by their past is brought together when their matriarch is suddenly diagnosed with Alzheimer’s. Three siblings are compelled to set aside their differences to care for ailing sick mother, but longtime grudges resurface.

This Guy’s in Love With U Mare

Heartbroken that his longtime crush Mike is now attached to a woman, Lester sets out to ruin that relationship by pretending to be straight and courting the affections of his love’s girlfriend.

Quadruplets, separated as children and of four different sexual orientations, are reunited as adults through a case of mistaken identity. Is there a happy ending for this unconventional family?

Fresh from a breakup caused by her fear of settling down, a video blogger embarks on a solo trip to Siargao hoping to move on and find a new adventure. She meets a rock singer caught between uncertainties of the future and baggage of the past.

Career-driven couple Angie and Jed decide to get married and find their relationship getting tested as they have each other’s in-laws, family disputes, and other events to deal with.

After an accident at a pharmaceutical lab, a mild-mannered ice cream vendor turns into superhero Gagamboy — a do-good crusader that protects the poor and oppressed.

After being hit by lightning thrice, a dressmaker named Perla discovers that she has developed superpowers: she can generate heat and electricity with her hands, and lightning flashes come out of her hands.

For more Cinema One movies this December and for daily schedules of Cinema One, click here.