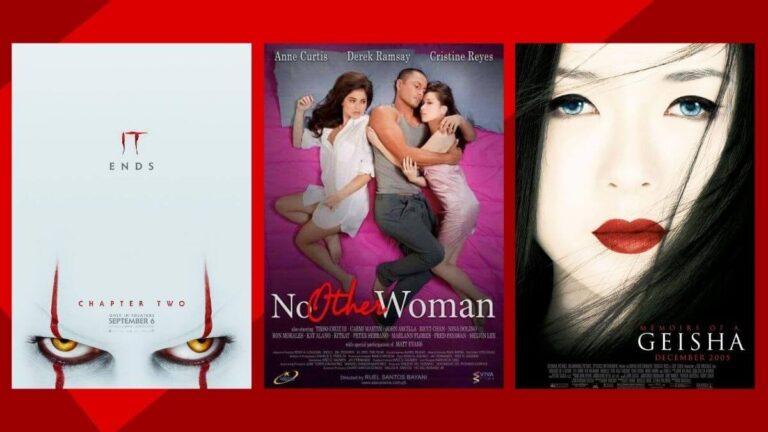 Isn’t it a bummer when you see your favorite movie already playing halfway through when you turn on the TV? Fret not! From rom-com and action to horror and thriller, we’re giving you a heads up on all the must-watch movies on TV from August 3 to 9, 2020.

1. Godzilla: King of the Monsters
(11am, HBO)
The members of Monarch, a crypto-zoological organization, must rely on the Godzilla and Mothra to defeat King Ghidorah and Rodan after the former awakens other dormant Titans to destroy the world.

2. No Other Woman
(11am, PBO)
A woman discovers that her husband is having an affair with a customer’s daughter.

4. She’s The One
(7pm, Cinema One)
After breaking up with his fiancee, cab-driver Mickey impulsively marries another woman after a weekend courtship. Meanwhile, his rich, married brother starts an affair with Mickey’s ex.

1. Beauty In A Bottle
(11am, Cinema One)
Three women struggle with insecurities as they get caught up in the craze over a new beauty product.

2. How To Lose A Guy in 10 Days
(2:40pm, HBO)
Benjamin is challenged by his co-workers to make a woman fall in love with him. On the other hand, Andie has to write an article on how to lose a man in 10 days.

3. Night At The Museum
(4:35pm, HBO)
Larry, a night security guard at the Museum of Natural History, gets some help from the exhibits who come alive at night to foil a robbery attempt of a magic tablet and proves that he is not a loser.

4. Cloudy With A Chance Of Meatballs
(5:30pm, FOX Movies)
Flint Lockwood is an inventor who develops insignificant things. However, when his local sardine cannery shuts down and an economic crisis looms ahead, he decides to put his latest invention to work.

5. Never Not Love You
(7:30pm, PBO)
Flint Lockwood is an inventor who develops insignificant things. However, when his local sardine cannery shuts down and an economic crisis looms ahead, he decides to put his latest invention to work.

1. Snakes On A Plane
(12:15pm, Cinemax)
Sean Jones, a witness, is on a flight to LA to testify against a mob boss, Eddie Kim. However, Flynn, the FBI agent accompanying Sean, must save the passengers from a disaster.

2. Taken 2
(2:05pm, HBO)
Bryan Mills, a former CIA agent, and his ex-wife, Lenore, are taken hostage by a ruthless gang in Albania. However, his daughter Kim helps Bryan break free and rescue Lenore.

3. Babe, I Love You
(3:15pm, PBO)
A wealthy architecture professor falls in love with a working-class woman who works as a promo girl.

4. The Chronicles Of Narnia: The Lion, The Witch And The Wardrobe
(4:20pm, FOX Movies)
While playing, Lucy and her siblings find a wardrobe that lands them in a mystical place called Narnia. Here they realise that it was fated and they must now unite with Aslan to defeat an evil queen.

5. She’s Dating The Gangster
(5pm, Cinema One)
Seventeen-year-old Athena Dizon unwittingly plays a trick on resident heartthrob and bad boy Kenji de los Reyes. All of a sudden, she finds herself pretending to be his girlfriend to make an ex jealous; however, she falls in love with him.

1. It Takes A Man and A Woman
(9am, Cinema One)
The relationship between Miggy and Laida didn’t last, and neither did Miggy’s business success. When Laida returns to help with a presentation to MET, old feelings come to the surface.

2. Memoirs Of A Geisha
(1:35pm, HBO)
Chiyo Sakamoto, a nine-year-old girl, is sold by her underprivileged family to a geisha house. She becomes a victim of unpleasant circumstances, but her fate changes when she meets Mameha.

3. Captain Marvel
(9pm, FOX Movies)
Amidst a mission, Vers, a Kree warrior, gets separated from her team and is stranded on Earth. However, her life takes an unusual turn after she teams up with Fury, a S.H.I.E.L.D. agent.

4. Ocean’s Eight
(9pm, HBO)
Debbie Ocean is released from jail after serving a prison sentence. She assembles a special crew of seven women to steal a diamond necklace, worth 150 million dollars, from the Met Gala.

1. The School Of Rock
(8:25am, HBO)
Dewey Finn, an amateur rock enthusiast, slyly takes up his friend’s substitute teacher’s job. Bearing no qualifications for it, he instead starts training the students to form a band.

2. The Jungle Book
(1:35pm, HBO)
Mowgli is a boy brought up in the jungle by a pack of wolves. When Shere Khan, a tiger, threatens to kill him, a panther and a bear help him escape his clutches.

3. Must Be Love
(5pm, Cinema One)
A young woman develops romantic feelings for her best friend, but problems arise when another gal enters the picture.

4. Catch Me I’m In Love
(7:30pm, PBO)
An advocate for the poor begins a rocky romance with the president’s spoiled son while accompanying him on an immersion trip to a rural community.

5. Iron Man
(9pm, FOX Movies)
When Tony Stark, an industrialist, is captured, he constructs a high-tech armoured suit to escape. Once he manages to escape, he decides to use his suit to fight against evil forces to save the world.

1. Captain America: The First Avenger
(11am, HBO)
During World War II, Steve Rogers decides to volunteer in an experiment that transforms his weak body. He must now battle a secret Nazi organisation headed by Johann Schmidt to defend his nation.

2. Pokemon Detective Pikachu
(3:05pm, HBO)
After the demise of his father, Tim travels to Ryme city where he runs into his father’s Pokemon partner, Pikachu. They team up and try to work on the case left unfinished by Tim’s father.

3. Apollo 13
(6pm, Cinemax)
Astronauts Lovell, Haise and Swigert of the Apollo 13 moon mission find themselves stranded when their spacecraft gets damaged. NASA must now find a way to bring them back before it is too late.

4. The Mistress
(7pm, Cinema One)
The mistress of a wealthy businessman is torn between her loyalty to him and her love for a young architect connected to her in unexpected ways.

5. Men In Black II
(7:25pm, FOX Movies)
Agent J learns about a mysterious alien who is searching for the Light of Zartha on Earth. However, he seeks help from his former partner, Agent K, who has retired and had his memories wiped.

6. It: Chapter 2
(11am, HBO)
After 27 years, the Losers Club receives a call from their friend Mike Hanlon that Pennywise is back. They decide to honor their promise and return to their old town to end the evil clown for good.

1. Rise Of The Planet Of The Apes
(12:10pm, Cinemax)
Caesar, a chimpanzee, has been with Will ever since he was born, and, with a new drug, he can think and react like humans. When Caesar finds himself subjected to injustice, he decides to revolt.

2. Spider-Man
(3:35pm, HBO)
Peter Parker, a shy high school student, is often bullied by his classmates. However, his life changes when he is bitten by a genetically altered spider and gains superpowers.

3. Maleficent: Mistress Of Evil
(9pm, FOX Movies)
Maleficent travels to a grand old castle to celebrate young Aurora’s upcoming wedding to Prince Phillip. While there, she meets Aurora’s future mother-in-law — a conniving queen who hatches a devious plot to destroy the land’s fairies.

4. Baby Driver
(11:15pm, HBO)
Doc forces Baby, a former getaway driver, to partake in a heist, threatening to hurt his girlfriend if he refuses. But the plan goes awry when their arms dealers turn out to be undercover officers.

The Chronicles of Narnia: The Lion, the Witch and the Wardrobe

Rise Of The Planet Of The Apes