In celebration of the premiere of the eighth and final season of GAME OF THRONES (#GameOfThrones) on 15 April at 9am on HBO GO and HBO, HBO Asia has commissioned Singaporean sneaker designer and home-grown label, SBTG, to create four bespoke sneaker designs paying homage to the series. Not available for sale, the four pairs of custom-designed GAME OF THRONES x SBTG sneakers will be on display from 17 to 30 April at the Limited Edt Chamber store in The Shoppes at Marina Bay Sands. GAME OF THRONES fans and avid sneakerheads in Asia can stand a chance to win a pair of these coveted kicks through a contest on this dedicated microsite. Contest ends on 25 April 2019.

Taking inspiration from the Emmy©-winning fantasy hit-series, the artist behind the SBTG label, Mark Ong, skilfully combined his signature military-inspired designs and intricate detailing with iconic GAME OF THRONES themes onto four pairs of sneakers. Three pairs are designed with familiar colours, motifs, and quotes from House Targaryen, House Stark and House Lannister while the fourth pair is given an icy transformation by the Night King and his White Walkers. Each pair of GAME OF THRONES x SBTG customized sneakers are embedded with Near-Field Communication (NFC) chips powered by VeChain, a public blockchain platform that allows any potential collector the ability to verify the authenticity of each pair through VeChainThor blockchain. The NFC chips also contain exclusive behind-the-scenes videos of each sneaker design which can be played and viewed by anyone using the Vechain mobile app.

Mark Ong, a.k.a. Mr. Sabotage is a sneaker artist and streetwear designer who has achieved cult status with a dedicated following of sneaker collectors both locally and abroad. Mark’s shoe customizations and streetwear designs are inspired by punk-rock and skateboarding culture. In 2002, he sold his first pair of customized Nikes online, which kick-started his journey as a pioneer in the field of sneaker design. Since then, Mark now runs his home-grown label – SBTG (short for ‘Sabotage’) with his wife and partner Sue-Anne Lim, a.k.a. Mrs. Sabotage, both catering to custom-designed sneakers and apparel. Among their celebrity customers are basketball players Kobe Bryant and Stephen Curry, nu-metal group, Linkin Park’s Mike Shinoda.

Ms. Magdalene Ew, Head of Marketing, Creative and Content at HBO Asia, says, “Due to its mass appeal, GAME OF THRONES has left a significant imprint not only in the entertainment scene but also on pop culture over the past decade. As we seek to extend the excitement around the season finale, we are pleased to tap the talent of a Singapore sneaker artist and streetwear designer, Mark Ong, to create these bespoke GAME OF THRONES sneakers. Through our collaboration with SBTG, we hope to bring together two distinct cultures – pop and street culture – for loyal fans of the show. This is what HBO Asia will do for the throne.”

Mr. Mark Ong, sneaker artist and streetwear designer, says, “As fans of the series, it was a no-brainer to take this project on as it allows us to have fun working as a team.” He further adds, “Reading the brief and knowing that we will be creating individual designs for four different houses got me really excited. I was able to apply my 'camouflage patterns' and featuring them respectively yet presenting them cohesively.”

Based on George R.R. Martin’s bestselling book series “A Song of Ice and Fire”, HBO’s hit Emmy® and Golden Globe award-winning fantasy series chronicles an epic struggle for power in a vast and violent kingdom.

New episodes from the eighth and final season of GAME OF THRONES will debut in Asia same time as the U.S. every Monday at 9am, with a same-day encore at 10pm, exclusively on HBO GO and HBO. 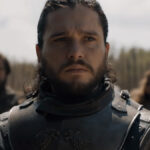 Kit Harington is set to reprise his role as Jon Snow!