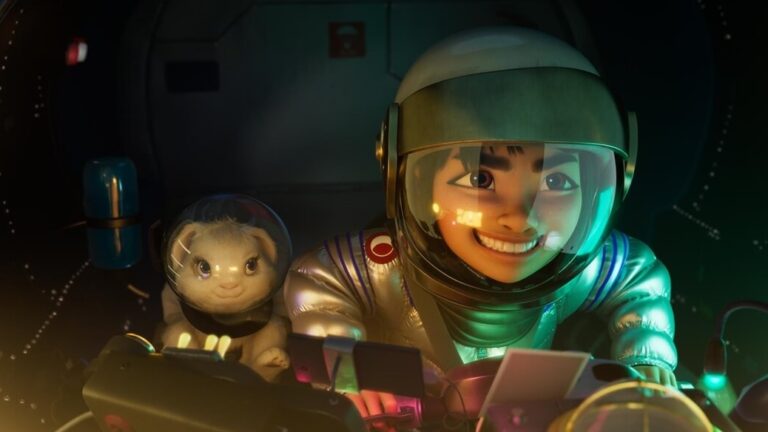 A new animated film is set to arrive on Netflix very soon, and it’s bringing together a team of talented artists and a star-studded voice cast to retell a story inspired by a classic Chinese character!

Over the Moon centers on a smart young girl named Fei Fei who builds a rocket ship to the moon to prove the existence of the Moon Goddess Chang’e. She eventually ends discovering a whimsical land of fantastical creatures on an unexpected quest she ends up going on.

Before the film premieres on Netflix, ClickTheCity got to join director Glen Keane, producers Gennie Rim and Peilin Chou, and lead voice actresses Cathy Ang, Ruthie Ann Miles, and Philippa Soo in a virtual event where they answered questions from the press! Here are 5 things we got from the Q&A:

The film incorporates the Chinese legend of Chang’e

The story of Over the Moon is inspired by the legend of Chang’e whose famous for taking immortality pills that took her up to the moon, where she awaits to meet her husband Hou Yi again. This story gave birth to the Autumn Moon Festival, celebrated in many Asian cultures annually.

The film has a star-studded voice cast giving life to the characters.

Newcomer actress Cathy Ang will be lending her voice for the character of Fei Fei, a lover of science who believes that she can prove the existence of Chang’e. “She’s so brilliant that at 12 years old, she decides that she’s going to build a rocket to the moon. She experiments with such determination,” Ang describes her. “It’s exciting to play a girl like that because I think kids could look up to her, and that’s wonderful.”

It also features music that the audience will definitely love

Over the Moon will be featuring original songs by Christopher Curstis, Marjorie Duffield, and Helen Park. Asked about what her favorite song is, Ang answered, “Ultraluminary” – a song Chang’e sings when she and Fei Fei finally meets. “You get to meet this goddess that this girl has been dreaming about, and she is just strutting and dancing for you, wearing designs by Guo Pei. She’s just everything that you want an idol to be. She’s truly a goddess, and you can’t help but dance to that song,” Ang explained.

Soo further shared her thoughts for the song, saying that the experience of seeing the song come to life is “like a superstar concert, better than a Beyonce concert”. “The animation is so beautiful, it’s so poetic. The images along are so breathtaking and so moving that I feel like you could make art pieces out of some of the shots [you] see,” she added.

Over the Moon is directed by Glen Keane, with a team of talented artists

The film comes from a talented team of artists led by Glen Keane, whose most notable works include The Little Mermaid, Aladdin, Tangled, and more. He worked with the screenwriter Audrey Wells (Under the Tuscan Sun), who pitched the story of a girl who decides to build a rocket to go to the moon. Sadly, the writer passed away in the middle of the film’s production, leaving the director and the producers with the desire to deliver and give justice to her vision.

Aside from them, another name who worked on the film includes fashion designer Guo Pei, who’s in charge of designing Chang’e’s costumes that’s both modern and authentic to what she is. Lastly, Peilin Choi and Gennie Rim join the film’s team as producers to translate Wells’ vision to screen!

Over the Moon is an animated film for all ages

Despite being an animated film, Over the Moon still makes sure that adults and children alike will have something to look forward to from it – from its music to its themes. “There’s so much there that this film says about love within a family and love lasting forever,” Peilin Chou said. “We know that kids are so smart, and they really get it, and we present it in that very pure way. I think people of all ages will feel very connected with [the story] and [it will] resonate with them.”

Over the Moon launches on Netflix in the Fall. You can follow its Netflix page as well as Netflix’s official Facebook page for updates and for more information.