The First Look Images on Ryan Murphy’s ‘The Politician’ Are Here!

Ryan Murphy's upcoming Netflix series The Politician launches globally on Netflix next month! Ahead of its release, the streaming service has just released the first look images of the 8-part comedy series, which stars Ben Platt, Gwyneth Paltrow, and more!

The Politician stars Ben Platt as Payton Hobart, a wealthy student from California who – from the age of seven – knows he's going to be the President of the United States. However, to get to that position, he must first go through "the most treacherous political landscape of all", which is Saint Sebastian High School. For him to become Student Body President, he must outsmart his classmates without ruining his crafted image.

The Politician, created and written by Ryan Murphy, Brad Falchuk, and Ian Brennan, launches globally on Netflix this September 27. For more information, you can check out the show's Netflix, Facebook and Instagram pages. 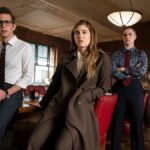 Netflix' 'The Politician' Launches on Netflix This September!

From the same guy behind shows like American Horror Story and Scream Queens comes The Politician - a new comedy show set to premiere on Netflix this September 27!