The Stars of Netflix’ ‘Insatiable’ Are Coming To Manila on October 8!

Debby Ryan and Dallas Roberts will also be joined by Gloria Diaz for the fan event!

Calling all Insatiable fans! The queens are headed to the Philippines next week!

Debby Ryan and Dallas Roberts, who play Patty Bladell and Bob Armstrong, respectively, are coming to Manila this October 8 for a special fan event! This was announced by Debby Ryan herself on Netflix Philippines' official page, where she also stated that our very own Gloria Diaz – who's making a guest appearance on the show – will also be joining them for the event.

The upcoming #InsatiablePhilippines fan event is set to bring together all the fun and exciting things everyone's loved about the show, including a pageant that we are yet to know the details of!

Ready to unleash the inner royalty in you? You can head on over to Netflix Philippines' official Instagram page for details on how you can take part in the fan event. 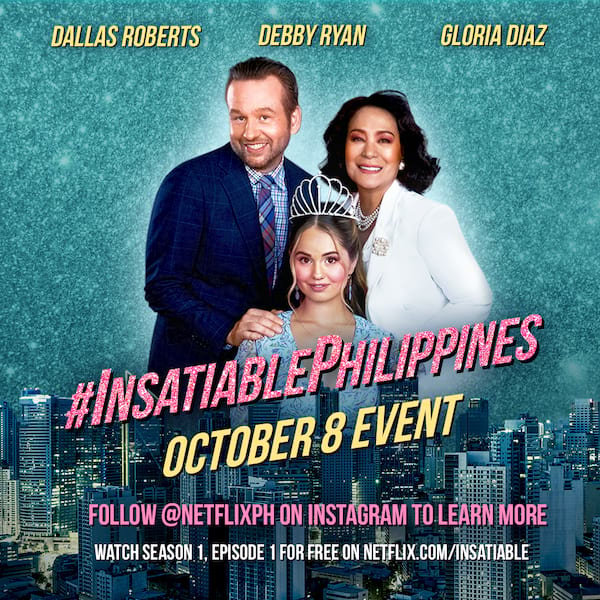 And if you're one of those who's always heard all the love and the rave for the show, but hasn't seen it yet, Netflix is making sure that it's easy for you to be part of the fandom! For a limited time from today, October 2, Filipinos (even the non-members!) will be able to watch the first episode of Insatiable Season 1 for free, by clicking on this link.

Just take note that the free episode can be viewed on desktop, as well as on Chrome browsers on Android. iPhone and iPad users would have to enter their email address to receive a link where they can watch the episode on their desktops.

Insatiable season 2 sees Patty dealing with a lot of issues on her past and her struggles on becoming "good" despite her inner demons. Bob, who's trying to help her cover up Christian's murder, will be questioning on how far his loyalties will go, and whether he will sacrifice his relationships and integrity to help Patty pursue her dreams.

The second season of Insatiable launches globally on Netflix this October 11. For more information, you may keep following on the show's official Facebook, Instagram, and Twitter pages.