Hung star Stephen Amell sat down with several journalists from around Asia for a phone interview.

His name may ring unfamiliar to many, but thirty-year-old Stephen Amell is slowly but steadily making his way up the Hollywood Ladder of Fame. After numerous small roles on popular American TV programs (The Vampire Diaries, 90210), Amell is now the newest face on HBO’s comedy-drama series, Hung, which third season premieres next Monday, December 5, after the 10 PM movie. The show’s storyline revolves around Ray Drecker (Thomas Jane), a high school history teacher and baseball coach who turns to a career in prostitution because he has fallen on hard times. 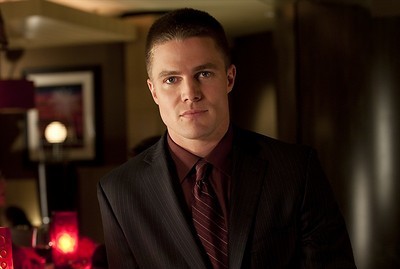 This upcoming third season, he finds himself dealing with a new challenge: Young upstart Jason (Amell), a busboy-turned-gigolo recruited by Lenore (Rebecca Creskoff) as a possible rival for Drecker. To help promote the third season, Amell sat down with several journalists from around Asia for a phone interview care of HBO-Asia last November 29, 2011. 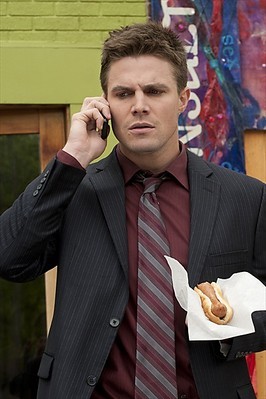 Since the purpose of the interview was to promote Hung’s third season, most of the questions asked were, of course, in relation to his character, Jason. Amell said that he had never seen Hung, but had heard of it prior to the auditions. He had walked in on the last day of auditions, was kept around to do a reading with Creskoff, and bagged the part the next day. When asked how his family reacted to his new role as a male prostitute, Amell said that playing a busboy-turned-gigolo was actually pretty tame as opposed to the roles he has played before, those of which include a sadistic werewolf, a murderer and a rapist. He said that his family was happy for him—the gigolo bit was only secondary. The fact that his role entails a lot of sex scenes does not bother him, either; he found his first experience very easy because everyone on set was extremely professional and that they knew how to assist an actor who would be going through it for the first time. “Once I got over the initial embarrassment of being pretty naked in front of people I didn’t know very well, then it was fine,” he adds. “Now, I enjoy them.” 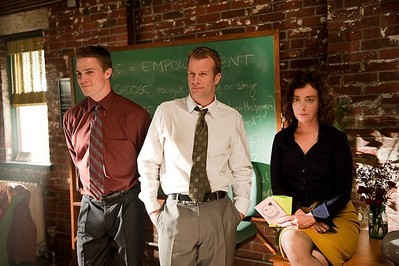 Despite being the new kid on the block on a show that has been around for two seasons, he felt very welcome on the set of Hung because he found everyone to be very pleasant to work with. He did not really find any trouble preparing for his role because Jason did not have a back story, so all he did was have fun on set, which was all very natural for him because like Jason, he loves to enjoy himself and not take everything too seriously. 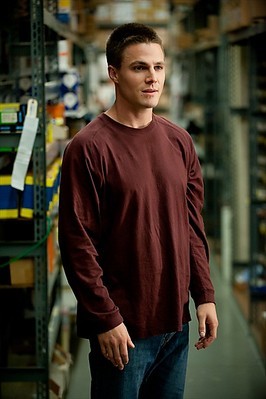 Amell also believes that his character will bring a new flavor to the show. “There are a lot of things that Jason does that Ray doesn’t do,” he shared, “Ray became a gigolo because he had to, while Jason does it for fun. There is a lighter air about Jason that is in contrast to Ray, so when they interact with one another, Ray is serious while Jason is a little more fun-loving.” He also says that he is very open-minded when it comes to sex, which I’m certain helps him very much in playing the role of Jason because male prostitutes can have male clients. “Jason’s character is straight, but that doesn’t matter in the gigolo world,” he adds. 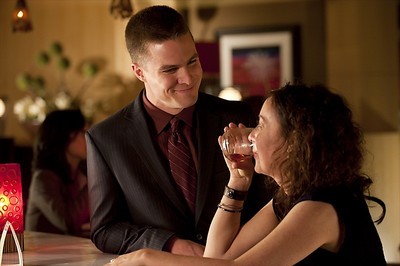 Because I was intrigued by his character, the first question that I asked Amell was if he found the career of a male prostitute to be empowering or problematic for Jason. Amell said that because Jason is leading a simple life, he finds the idea of becoming a gigolo fun and exciting because he gets paid to have sex. The presence of his fiancée Sandee, however, makes all the difference in the world because having to provide for her financially gives Jason and Lenore a whole slew of unexpected problems. 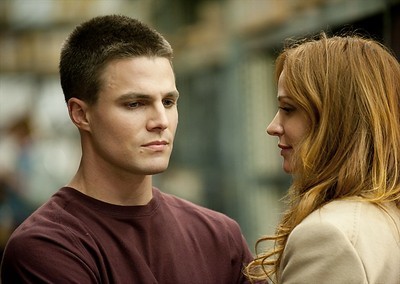 Due to the nature of the show, Amell said that he has learned to enter a scene with an open mind. Because he has so much to experiment with, he has learned to become flexible and to try to do things in different ways, and he believes that this is a good exercise for an actor. He also shared that people have begun to recognize him on the streets and have a lot of nice things to say about Jason. I asked him about how it felt to break out into the Hollywood circuit as a Canadian actor, to which he said felt great. “One of the things that actually frustrates me about the Canadian acting scene is that you kind of have to go down to the States to make an impact as an actor,” he said. “But it does feel good. I’m not saying that you can’t have a successful career in Canada—because you can and people do—but the idea that I’ve come down here into a significantly bigger talent pool and have had a bit of success so far is very gratifying.”