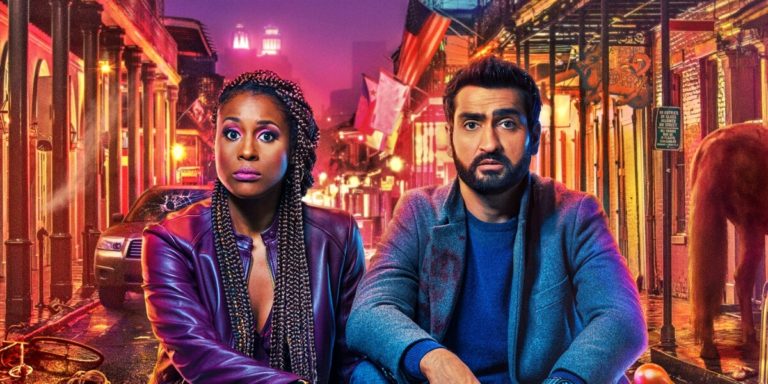 The two talked about their on-screen chemistry, working with director Showalter, and more!

The Lovebirds, a romcom film with a spin of murder mystery, is now streaming on Netflix!

In this film directed by Michael Showalter, stars Kumail Nanjiani and Issa Rae play the couple Jibran and Leilani, whose round-the-clock disagreements are causing their 4-year relationship to crumble down. However, on the day when they finally decide to break up, they get entangled in a bizarre murder mystery.

Wanting to clear up their names, the two who couldn’t even agree on where to eat decide to go on the run and solve the crime together. But the death of one man will lead to a bigger conspiracy.

In an online roundtable interview with the press, Kumail and Issa readily answered some of our questions about the film. Here, they talked about their chemistry together, the best moments they had shooting, and more! Check out the highlights from the interview below.

Did that chemistry you two have in the film come naturally or did you have to work on it?

Kumail: [We didn’t really work with each other before this,] we met very briefly. I feel like, we sort of connected right away as we were working on our characters together. We started talking about our past relationships and stories we’ve heard or lived through and I feel like that dynamic developed very quickly. It helps that I was such a fan of hers and I felt like right from the beginning we wanted to make the exact same kind of movie.

Issa: Yeah, completely echo everything Kumail said. I think we’re in this movie together 100% of the time. We’re in every scene together, so you know, there was an opportunity to learn about each other behind the scenes, while we were working on what we wanted our characters to be and who we wanted our characters to be. And then of course, being around each other, for hours a day you’re getting to know each other more.

The film was supposed to have a theatrical release and because of the pandemic it’s going straight to Netflix. How do you feel about this?

Issa: It feels great. I think we were disappointed that it didn’t get a theatrical release but obviously, you know, there are bigger problems in the world, and we were completely understanding of that. And I know I can speak for both of us that we’re super excited that Netflix decided to release our movie, especially given the competition out there.

There are so many people and other movies that got lost from our festival, South by Southwest, that are still looking for homes and worthy movies on top of that, so it just feels like a huge honor that we were able to get this release and people can enjoy the movie and laugh and the comforts of their own home.

For Issa, before this romcom film you recently starred in the serious romantic film ‘The Photograph’. What’s more challenging, working on a comedy or a serious drama?

Issa: I think they both present challenges. Insecure has its dramatic moments for sure but it’s primarily a comedy and I think working on something that is purely dramatic was a unique challenge, a fun challenge. And then of course executing a director-writer’s vision was really refreshing for me and it’s something that I definitely want to do more.

And I think with The Lovebirds, it was a different type of comedy, working with a veteran comedian who’s extremely witty so it really challenged my own chops. It was such a pleasant challenge to work on this.

For Kumail, you and your wife posted photos of you looking jacked for Marvel’s Eternals, but while most people are interested in the physical transformation, was there also some kind of mental transformation?

Kumail: I would say I’m about 30% less interesting now (laughs). Honestly there has been a mental change. I do feel a lot less anxious, I sleep better, and I deal with stress a lot better so that’s been a big change. For me, making this change, it’s just how I saw this character.

I’m playing this first Pakistani superhero in a Marvel movie and it was important to me that he looked like someone who could hang with Thor or Captain America, or any of those other people who have gotten traditionally be superheroes in big Hollywood movies. So for me, it was that I just wanted to look like someone who could hang with those guys.

Kumail, you worked with director Showalter before while this is Issa’s first time working with him. For you two, what qualities about him as a director make him so attractive to work with?

Kumail: Yeah, he directed the Big Sick and then years ago, 13 or 12 years ago, I wrote for a TV show that he created which is sort of where we’ve met. I would say what appealed to me about him was that he could do drama and comedy, which is pretty rare. A lot of directors specialize in one or the other, but I felt like Mike was someone who could really nail the comedy, but wasn’t afraid of the emotional moment. So it’s a pretty unique combination that you don’t get in a lot of filmmakers.

Issa: Yeah, and I appreciate that he really got outside the box. I think those early conversations we had about even changes that he wanted to make to the script, and things that he felt like he wanted to challenge certain norms, I admire that about him as well.

What can couples, whose relationships are being tested during these trying times, pick up from the story of Jibran and Leilani?

I hear from a lot of couples who are sort of stuck home, [that they] are going through problems. Obviously it’s challenging but you really have to communicate because if you don’t, that resentment can really grow.

Issa: Yeah, I think this is also a perfect opportunity. It’s a natural test of relationships and you can come out of it stronger or you can come into this and decide this wasn’t for me, and that’s okay.

Kumail: I think that’s right. I think sometimes we see the end of a relationship as a failure. It’s not, sometimes relationships should end.

Can you share with us some of the best moments you’ve had making this film?

Issa: Some of the best moments… Well, definitely shooting in New Orleans was a big treat. For me, I think spending a month and a half in one of the best food cities in the world was an absolute treat and it’s a wonder that I didn’t gorge every single day. It’s a beautiful city and it’s a festive city.

Kumail: For me, it was working with Issa Rae, you know.

Kumail: Please write that (laughs). I love New Orleans too. I mean what a great city! I was actually just missing it recently because I’ve been sort of thinking about it a bunch, because obviously we’re talking about this movie but hopefully we’ll get back soon.

The film began with Jibran and Leilani arguing if they could win the Amazing Race. If you had to do it with your significant others, how do you think would you fare?

Kumail: I would say [that with] my wife Emily, I think we would do well. I think we’re good at problem solving together. She’s very good. And I think the big key is we freak out at different times so there’s a catastrophe, I freak out immediately, and then I’m okay, and she’s okay in the moment and then she freaks out. So our freak outs, they’re coordinated, they’re not synchronized so I think that’s why we would do okay.

Issa: I think that as a partner generally, I’m a big cheerleader and I think that that’s valuable, but beyond that I’m pretty useless.