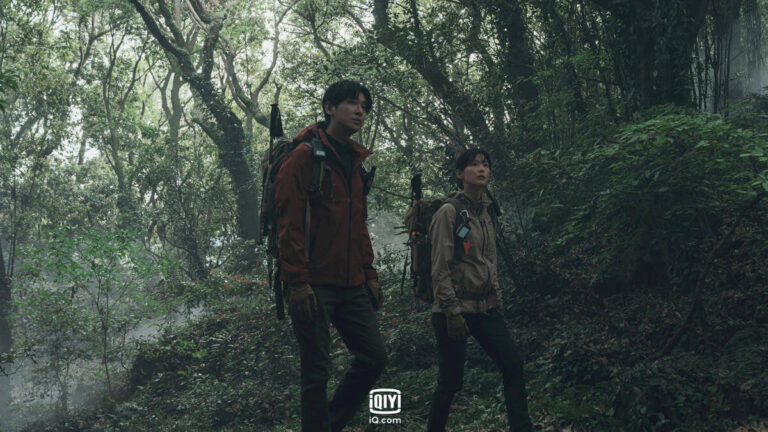 Jirisan, iQiyi’s Original Korean drama series starring Gianna Jun and Ju Ji-hoon, and created by director Lee Eung-bok (Descendants of The Sun, Guardian: The Lonely and Great God) and writer Kim Eun-hee (Signal, Kingdom), saw in its latest episode that Lee Da Won, the young and inexperienced park ranger played by Go Min-si, met her tragic end in very suspicious circumstances. On the other hand, Gianna Jun and Ju Ji-hoon encountered the unusual will-o’-the-wisp phenomenon and were even attacked by a wild bear while on duty. Jirisan exclusively simulcasts with Korea at 8PM (SGT) every Saturday and Sunday on iQiyi.

One of Jirisan’s rangers, Lee Da Won (Go Min-si) was found to have been pushed off the mountain and died in the valley as revealed in the latest episodes. She had met a suspicious person in park ranger uniform just before she was murdered. From her mobile phone, the park rangers found a recording of the voice of their branch office lead Jo Dae-jin, played by Sung Dong-il. In Lee’s hands was also Jo’s black glove. With the evidence pointing to Sung Dong-il, a crying Gianna Jun questioned him, “Did you do all this?” However, things may not be as simple as it seems. Is Sung Dong-il really the murderer or was he set up?

As the timeline returned to 2019, Gianna Jun and Ju Ji-hoon encountered the scary phenomenon of the will-o’-the-wisp, and it turned out to be the reflective eyes of a wild bear in the dark. As Jun and Ju hid from the bear’s attack in a cave, they discovered someone trapped and in need of help. Carrying him on his back in a race down the mountain to urgent medical attention, they managed to save his life and avert the danger with each other’s help.

Through their work together, Gianna Jun and Ju Ji-hoon grew close. A sweet scene saw Jun examine Ju’s leg and the latter took the opportunity to hold her hand and teased, “You’re touching my leg, it’s fine for me!” Also, just prior to a dangerous situation, Gianna Jun gave Ju Ji-hoon an amulet in the hope that he would be protected from danger, in another memorable scene of their care for each other.

A flashback to Jirisan’s 1991 tragedy revealed there was an attempt to build a cable car service up the mountain, but the villagers disagreed. The resulting conflict saw the passing of a couple of the Kim family and they were survived by their young child. The entire village was also forced to relocate. Whether the tragedy is linked to Jirisan’s series of murders and terror incidents between 2018 to 2020 remains to be seen.

In addition, production studio AStory announced that Jirisan OST’s seventh theme song entitled ‘Our Road’ sung by Rothy made its debut in Jirisan’s latest episode (10th). ‘Our Road’ features folk and country styled music as its foundation, as it brings comfort and evokes the feeling of being immersed in the natural surroundings of Jirisan.

The iQiyi Original K-series exclusively simulcasts with Korea at 8PM (SGT) on Saturdays and Sundays on iQiyi International app or www.iQ.com worldwide.