Netflix’s new science fiction series is daring, shows us something new, and tackles themes and issues head on--which makes it worth the viewing. 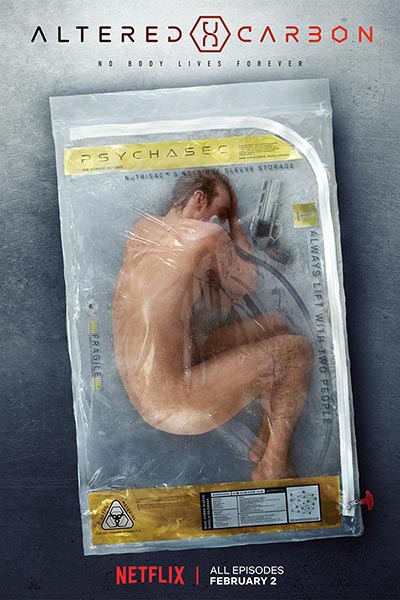 'Altered Carbon’ is Netflix’s new science fiction series that merges a whole gaggle of genres from crime, noir, action, adventure, social commentary, and even a morality play into a ten-episode romp to a far future with frightening ideas about a future where people do not die.

In this future, alien technology has allowed humans to digitize their consciousness, which allows people to live forever and due to this, they’ve conquered other planets, mastered cloning technology, and turned earth into a technological behemoth complete with flying cars and sentient machines.

‘Altered Carbon’ follows the story of Takeshi Kovacs, a soldier and convicted terrorist whose consciousness was put to sleep for 250 years and downloaded into a new body by the extremely wealthy and powerful, Laurens Bancroft. Bancroft offers Kovacs a reward he cannot refuse in exchange for solving a murder. Kovacs is tasked to solve the murder of Laurens Bancroft himself.

In ten episodes, Kovacs must navigate through a world where death does not have to be permanent and the world has changed drastically, and not necessarily in the most ideal of ways.

What makes ‘Altered Carbon’ interesting is its world building. This future Earth has changed dramatically and the show is not afraid to get down and dirty with how humanity changed alongside this new technology. So far into the future, with time on their hands, people speak various languages and it explores the extent of the darkness inside the human soul when time is no longer something to fear.

The series takes its time in the first few episodes to establish this new world, its society, and its rules. While Kovacs is in a mission to solve the murder, the first few episodes sets up the audience to really get to know all the characters and how this world works. It has a healthy dose of action, complex character relationships, and it even goes through the motions of detective work as Kovacs finds more clues to a larger conspiracy behind the murder.

Altered Carbon is brave and daring, unafraid to give us something new. It even homages the look of ‘Blade Runner’ and ‘Blade Runner 2049’ in its depiction of a future world where technology is all-encompassing. It has a wonderful sense of social commentary, how it interweaves morality, religion, and class politics into its narrative without seeming didactic or preachy.

It’s weakest in its gratuitous use of nudity and sex, where there is a lot of it, and oftentimes handled without any real sense of sensuality. The dialogue is overwritten, including a narration that feels labored.

But it’s strongest when it deals with the complex world and the complex relationships that fill up the world. Joel Kinnaman gives a committed performance as Takeshi Kovacs, a soldier whose hand is forced into an overwhelming situation. He is cold, and oftentimes apathetic to the events around him, very different from Kinnaman’s role in ‘House of Cards.’ James Purefoy is a perfect choice for Laurens Bancroft, a man so wealthy that he has lived for over three hundred years on the same body. Not all the performances are on the same level as Kinnaman, Purefoy, or even Dichen Lachman, who plays Takeshi Kovacs’ sister. Martha Higareda plays Kristin Ortega, a cop who has mysterious ties to this case and to Kovacs and while she seems lost in the first few episodes, she finds her ground and slips into her role wonderfully after episode five.

While the show is not on the same level as other Netflix shows like ‘House of Cards,’ ‘Godless,’ ‘Stranger Things,’ or ‘The Crown,’ ‘Altered Carbon’ is fully immersive, well conceptualised, and still very entertaining. It’s daring and shows us something new and tackles themes and issues head on, which makes it worth the viewing. It’s good science fiction and it feels original, and that’s something to cherish in this day and age of reboots and rehashed storylines.

Altered Carbon launches globally Friday, February 2, 2018 only on Netflix. For more information, you may visit its official Netflix page, as well as their Facebook and Twitter pages.

WATCH: The History of Immortality - An in-dept journey to the backstory of 'Altered Carbon'

Narrated by Neil deGrasse Tyson, this short documentary will take you to a journey where we are discussing the history of immortality and the redefinition of identity from the eyes of the experts. Watch it here at ClickTheCity.

WATCH: 'Altered Carbon' Featurette: Prepare to Fight For Your Lives

Learn more about the action sequences in Altered Carbon as the cast and crew take you behind the scenes with this exclusive look at the compelling fight sequences that feature in the series and the preparation that went into creating them.