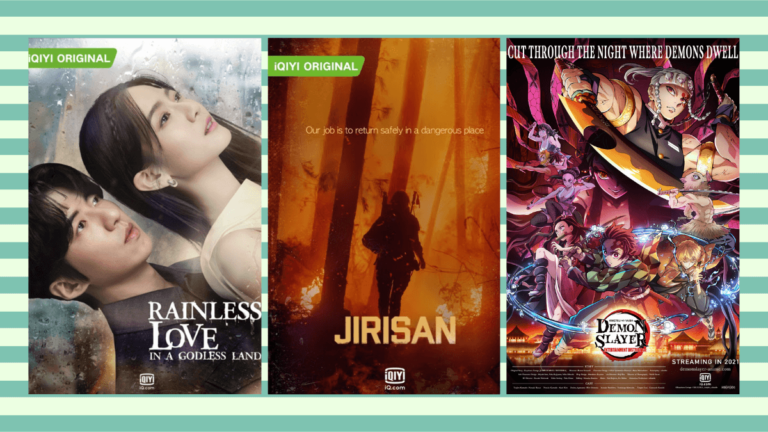 10 Asian Films and Series Coming to iQiyi This October 2021

All the Chinese Dramas, K-dramas, and anime we can't wait to stream!

Love to watch C-dramas, K-dramas, and anime? Then one of the best streaming sites to subscribe to right now is iQiyi, which has a wide variety of titles and is still set to release an amazing slate of titles in the coming months. Below, we’re listing down some of the highly-anticipated Asian titles that are coming to iQiyi for the month of October.

Rainless Love in a Godless Land is a Chinese drama based on Amis myths. It follows a supernatural entity called the Kawas, who decide not to bless the Earth after human destroys the land and leave the world after the last rain. During the countdown to the apocalypse, ‘Orad, the God of Rain, falls in love with a human. This drama stars Paul Fu and Chiao Chiao Tseng.

The Pavilion is about an “octagonal pavilion case” that hasn’t been solved for almost a decade. The case left the Xuan family in a haze, and suspicious of their relatives. The case reopens when the murder starts happening again. Duan Yi Hong, Hao Lei star in this C-drama.

The Flowers are Blooming is another Chinese drama set in the sixth year of Xiao Guo and Yongjia. It centers on Princess Chen Langyue of Showa, who sneaks out of the palace because of her obsession with building fortifications. She then decides to join the Muyu Craftsman Team, founded by Li Qingfeng and Fa Xiaoluo. Starring in this series are Zhu Xudan, Han Dongjun.

In this 12-episode C-drama, an app called “Wisher” suddenly appears on the phones. This app can help students achieve their dreams by accomplishing certain missions. What they don’t know, however, is that great danger awaits those who use it as they become dominoes of a mysterious organization. William Feng, Vicky Chen star in this drama.

Be My Princess is a Chinese drama about Mu Yanzhou, an actor who values his acting and Ming Wei, a part-time translator who is chosen to be Yanzhou’s leading lady in a new play. The two then find themselves caught in an unexpected situation, especially after Yanzhou loses his memory from an accident. It’s now up to Ming Wei to help Yanzhou recover. This stars Jeremy Jones Xu, Zhou Jie Qiong.

Gold Panning is a drama set in Simuchang, the southern gold rush area, where gold diggers have to find gulch gold before the rainy season. It centers on a novice gold digger named Chen Baojin who arrives in the area to find the truth behind his brother’s death. Things get complicated when the situation goes haywire, and the “washing” wipes out the expectations of the season of gold diggers. Fan Liao, Feiyu Chen, Xiaolin Lu star in this drama.

The second season of Demon Slayer up after the events of the Mugen Train movie and features the Entertainment District Arc. It continues to follow Tanjiro and the gang as they work with the Sound Hashira Tengen Uzui in finding a demon that’s been terrorizing Yoshiwara’s red-light district.

The Hypnosis is about a Do Hyun, a college student, and his friends who’ve all lost their childhood memories and have been living their own lives. Things take a turn for them when they meet and befriend Jin Ho, who lost his parents in an accident as a child, and they become interested in the hypnosis that Jin Ho’s been receiving to treat his trauma. They decide to do it, but they eventually start experiencing strange things and recollecting memories of Seung Min, who was already dead. They must then figure out why Seung MIn’s memories keep coming back. The Korean film stars Lee David, Johyun, Kim Do Hoon, and more.

Rainless Love in a Godless Land