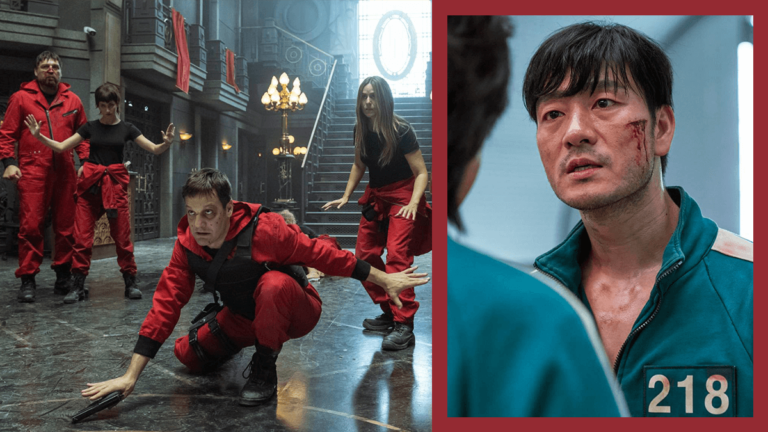 10 Shows and Films Coming to Netflix This September 2021

If you’re the kind who needs to plot your binge-watching schedules for the month, worry not, because we’re giving you a rundown of the most awaited shows and films launching on Netflix Philippines this September 2021.

Dito at Doon is a film set during the pandemic and revolves around a political science graduate Len and her online/offline frenemy Caloy. The two then start an online romance, despite their different background, polarizing views, and the challenges of not being physically together. JC Santos and Janine Gutierrez star in this film by JP Habac.

The first volume of Money Heist Part 5 will continue to follow The Gang, who’s been shut in the Bank of Spain for over 100 hours, and has been able to rescue Lisbon. The Professor has also been captured by Sierra, and doesn’t have an escape plan for the first time. Just as they think as if nothing can go wrong, a more powerful enemy — the army — comes on the scene. And what began as a robbery turns into a war as the end of the greatest heist in history approaches.

Kate is a film centering on a finely tuned assassin named Kate, who’s at the height of her game. However, when she blows an assignment targeting a member of the yakuza in Tokyo, she discovers she has been poisoned and that she has less than 24 hours to take revenge on her killers. She then forms a bond with the teenage daughter of one of her past victims to pursue one last self-appointed job.

The final season of Lucifer features the titular character, who just scored a promotion despite not being sure if he wants the job. Meanwhile, Chloe prepares to give up detective work while Amenadiel joins the LAPD. Tom Ellis, Lauren German, D.B. Woodside, and more star in this series.

I’m Drunk, I Love You
September 15

I’m Drunk, I Love You is another film by director JP Habac. It follows two college best friends who go on a road trip days before graduation. It’s there that they settle how they really feel for each other. Starring in this film are Maja Salvador, Paulo Avelino, Dominic Roco, and Jasmine Curtis-Smith.

Nightbooks centers on a boy named Alex, who’s obsessed with scary stories. When he is trapped by an evil witch in her magical apartment, where he must tell a scary story every night to stay alive. To find a way to escape, he teams up with Yasmin, another prisoner. This film stars Winslow Fegley, Krysten Ritter, Lidya Jewett.

Sex Education returns for season 3 this September! The new season continues to follow Otis, who is attempting to hide his secret hookup. Meanwhile, word about the “sex school” goes around and a new headteacher tries to control the student body. Asa Butterfield, Emma Mackey, Ncuti Gatwa, Gillian Anderson, and more star in this series.

Squid Game is an “imaginative, unorthodox story” about 456 contestants who compete and risk their lives in a series of survival games. Out of the 456 of them, only one can win and survive to claim the 45.6 billion won prize, while those who fail in the games must pay the price of death.

From the creator of The Haunting of Hill House comes Midnight Mass. This is a story about a small and isolated island community that experiences miraculous events and omens after the arrival of a disgraced young man and a charismatic priest.

Bangkok Breaking is an action-thriller drama about Bangkok’s road rescue services. It centers on Wanchai, who arrives in Bangkok and finds himself unraveling a city-wide conspiracy with a young journalist. The series comes from producer Prabda Yoon and director Kongkiat Komesiri.