MTVph Exclusive: Incubus’ Mike Einziger on ‘8’ and their relentless sound

Just a few days shy of the band’s nth concert in Manila, MCA Music Inc. made it possible for MTVph to chat with Incubus guitarist and co-songwriter Mike Einziger about their latest album ‘8’ .

Just a few days shy of the band’s nth concert in Manila, MCA Music Inc. made it possible for MTVph to chat with Incubus guitarist and co-songwriter Mike Einziger about their latest album ‘8’ and the seemingly infinite bond of Incubus members since its formation back in 1991. 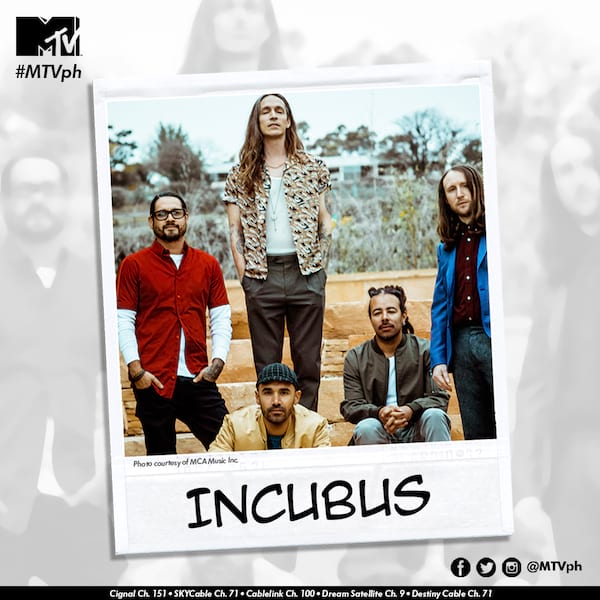 After Incubus’ 6-year hiatus, here comes their latest album ‘8’ which may sound a bit similar with their old albums S.C.I.E.N.C.E. and A Crow Left of the Murder. “For us, we may seem like we're very in control of these songs we're writing. Like, it's very deliberate that we're sounding the way that we are. The truth is that, we're kind of following the process and it kind of comes natural to us. So, I think that if it sounds that way, if it comes across that way, that makes me really happy that it does, but I can't say that that was our intention,” Mike says.  “I think that these albums and these songs are really just a product of who we are. We can't get away from the way that we sound. It's a really amazing experience, to be able to be here in 2018 making music together.”

For almost three decades in the industry, Incubus continues to evolve with their music that Mike reveals there’s just no particular track to define what they stand for. “Incubus is made up of five individual people and each one of us are really different than the next but I can say that I think my favorite song on the album is a song called 'Loneliest'. I just love the lyrics. I think it really is a beautiful song, and I also love Skrillex's production. I think he did a really great job of making that song, giving that song the identity that it has. I like that his fingerprints are on that song.”

Mike adds: “Some of the messaging with the music [in the new album] is conscious and some of it is unconscious. We really hoped that our audience draws their own interpretations from the music that we make. But, I would just say, with anybody, it's always important to express yourself and just speak out about things that are important to you. I guess the caveat being that doing it in a way that's constructive.”

When it comes to performing live, deciding on which songs to play on stage keeps Incubus on their toes. MTVph asks Mike what song he would prefer to play more during their concerts, he shares: “I don't know. It's a good question, and no one's ever asked me that question. I can't really think of any, 'cause if there's ever a song that I really want to play, we can play it. But, it's always a process, though. Figuring out what we're gonna play. It's really difficult because we have so much music at this point. It's always an interesting journey figuring out what songs we play. It's a challenge.”

MTVph champions home-grown and international music, redefining entertainment for the young Filipinos, celebrating their youth lifestyle, re-energizing the local music scene, and fuelling pop culture. All these and more as the revolution is ON with MTVph!