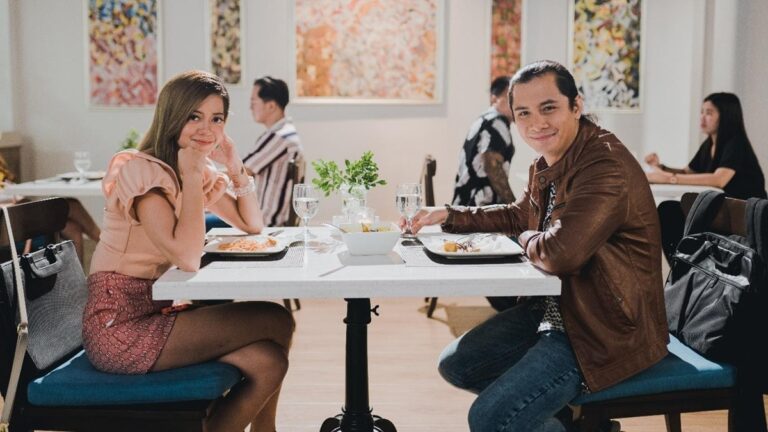 13 Reasons Why You Should Definitely Check Out WeTV’s ‘Boyfriend No. 13’

Do you believe in destiny? The lovestruck Kimverly Santillan (Sue Ramirez) certainly does as she continues on in her pursuit of “The One” in the WeTV Original romantic comedy series Boyfriend No. 13. Where do things stand between Kim, Doc Don (JC De Vera) and Bob (JC Santos)? You can now stream all eight nakaka-in love episodes of the show on WeTV for FREE!

If you’re still asking why you need to be watching this offbeat crazy funny series about getting lucky in love, then we’ve rounded up 13 reasons on why you need to get on this bandwagon real fast. You’ll be clicking “Watch Now” sooner than you can say swerte!

As Bob’s level- headed cousin and head of the publishing house they all work for, Joash plays counterpoint to the crazy plan that Kim and Bob try to pull-off before it turns into a trainwreck.

In short, this show has got all the feels! With each episode, you can’t help but feel kilig as  Don and Bob are both great catches! As Jing puts it, “Ikakaganda siya ng buhay mo dahil ang popogi ng bida!”

Manet is idealistic and supportive, especially when it comes to love, but she’s willing to knock some sense into Kim when things start to go awry.

Everyone needs a feel good story when love conquers all. This is the feel-good show everyone needs to see…now.

We already know what an amazing actress Sue is, but this girl has got quite the vocal chops too! Listen up and we guarantee it will be playing in your head all day long. Catch the official lyric video on the WeTV social media and YouTube accounts.

Now, this was serendipity! When casting began, Sue Ramirez and JC Santos were a shoo-in, but Direk Sweet wanted a picture-perfect actor to play Don. JC De Vera was tops on his list. As he put it, many casting directors avoided putting the two guys together because of their names, but he knew the pairing would work well for the show.

JC Santos says these lines as part of his “pitch” to be Kim’s Boyfriend No. 13, paving the way to her soulmate. What is “The Bob experience” is all about? Tumuka ka na to find out.

As the man destiny has chosen for her, Kim is convinced that Don is the one who will make her the happiest. Not to mention, viewers get to see JC as Kim does – with his shirt off.

Yup, Kim has had 12 boyfriends, each of whom she broke up with based on one superstitious belief or another. Now she’s using every pamahiin in the book to make she gets past unlucky no. 13 and on the road to true love.

You can now binge watch all episodes of Boyfriend No. 13 on WeTV for FREE and find out how Kim works with or against tadhana to get to THE ONE.

To stream Boyfriend No. 13 and other WeTV Originals and the very best in Asian Premium Content, original series, Filipino shows and anime, just download the WeTV and iflix app from the App store and Google Play, and start watching! A monthly subscription rings in at only P59, quarterly at P159, and an annual subscription is only P599 for recurring subscriptions, while a one-month pass is only P149.