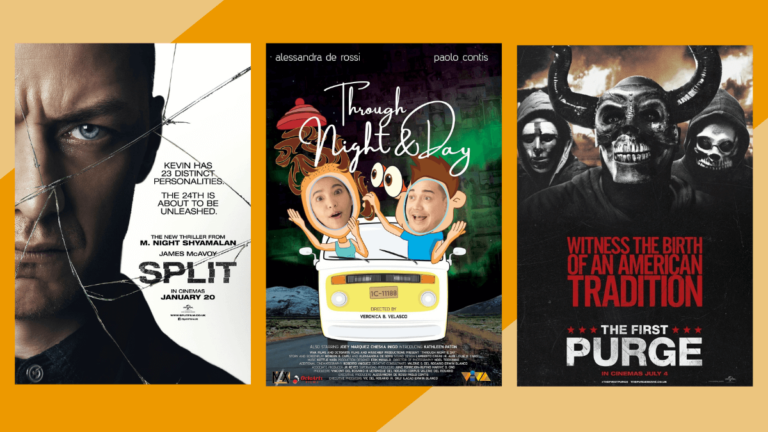 Isn’t it a bummer when you see your favorite movie already playing halfway through when you turn on the TV? Fret not! From rom-com and action to horror and thriller, we’re giving you a heads up on all the must-watch movies on TV from July 26 to August 1, 2021.

Bloody Crayons
(5pm, Cinema One)
A seemingly tight-knit group of college friends goes to an island to shoot a horror short film. But their world turns upside down when one of them gets killed after playing the Bloody Crayons Game.

Cats
(6:40pm, HBO)
A tribe of cats must decide yearly which one will ascend to the Heaviside Layer and come back to a new life.

The First Purge
(7:15pm, FOX Movies)
The New Founding Fathers of America decides to test a sociological theory that aims at reducing the crime rates but things get out of hand when two rival groups face each other.

Trolls
(5:35pm, FOX Movies)
After the banished Chef of Bergens captures Trolls during a celebration, Princess Poppy and Branch set out on a mission to rescue their friends.

Red
(8:10pm, HBO)
Frank Moses, a former black-ops agent, learns that his life is under threat from an assassin. In a bid to protect himself, he reunites with his old team to nab the man who has vowed to kill him.

The Mall, The Merrier
(9pm, Cinema One)
Two siblings fight for ownership of their parents’ mall.

Mamma Mia!
(10:50pm, FOX Movies)
As Sophie and her family are busy preparing for her wedding, she secretly invites three men, who were her mother’s lovers in the past, with the hope that one of them is her father.

A Very Special Love
(3:15pm, PBO)
Editorial assistant Laida Magtalas finds herself working for the man of her dreams, Miguel Montenegro, but remains blind to some hard facts.

21 Bridges
(7:25pm, HBO)
Andre, an aggressive police officer, determines to put an end to two war-veterans-turned-killers after they shoot down a few officers during a heist.

Para Sa Hopeless Romantic
(1pm, Cinema One)
A student writer struggles to find a happy ending to her romantic novel after her real-life romance falls apart.

Jerry Maguire
(3:20pm, Cinemax)
Sports agent Jerry Maguire tries to get back on his feet after being fired from his job. However, the only client he has is Rod Tidwell, a disgruntled football player who wants a better contract.

17 Again
(3:50pm, HBO)
Mike is unhappy with the way his life has turned out and wishes he could be 17 again to change it. One day, he wakes up to find that his wish has been granted.

ABNKKBSNPLAko? The Movie
(6:30pm, PBO)
An author recollects memories of his childhood to early student days until his few years at work.

The Hobbit: The Battle of the Five Armies
(9pm, FOX Movies)
Bilbo fights against a number of enemies to save the life of his Dwarf friends and protects the Lonely Mountain after a conflict arises.

The Grinch
(8:45am, FOX Movies)
The Grinch grows increasingly annoyed with the ever-growing festive cheer that engulfs the village of Whoville. So, he teams up with his dog to ruin the festive spirit by being a spoilsport.

Jumanji: The Next Level
(3:35pm, HBO)
When Spencer goes missing, the gang returns to Jumanji to travel unexplored territories and help their friend escape the world’s most dangerous game.

Men In Black: International
(5:05pm, Cinemax)
Agent M, a probationary member of the MIB, teams up with Agent H and uncovers a sinister plot that reveals a traitor in the organisation aiding an alien invasion.

A Second Chance
(7pm, Cinema One)
After their storybook wedding, Popoy and Basha find married life, and starting a business, more challenging than they ever imagined.

Despicable Me 2
(3:55pm, HBO)
When a new criminal comes to town, the Anti-Villain League decides to hire Gru in order to fight him off. While Gru initially refuses, he eventually agrees after his aide goes back to his evil ways.

Through Night and Day
(9:30pm, PBO)
It is about Ben and his fiancé Jen’s tour in Iceland that made them knew each other more.

Fast & Furious 6
(9:50pm, HBO)
Hobbs is tasked with catching a team of mercenary drivers who manage to evade him every time. However, he enlists the help of Dominic and his team in exchange for full pardons for their past crimes.

Split
(11:15pm, FOX Movies)
Kevin, who is suffering from dissociative identity disorder and has 23 alter egos, kidnaps three teenagers. They must figure out his friendly personas before he unleashes his 24th personality.

The Hobbit: The Battle of the Five Armies