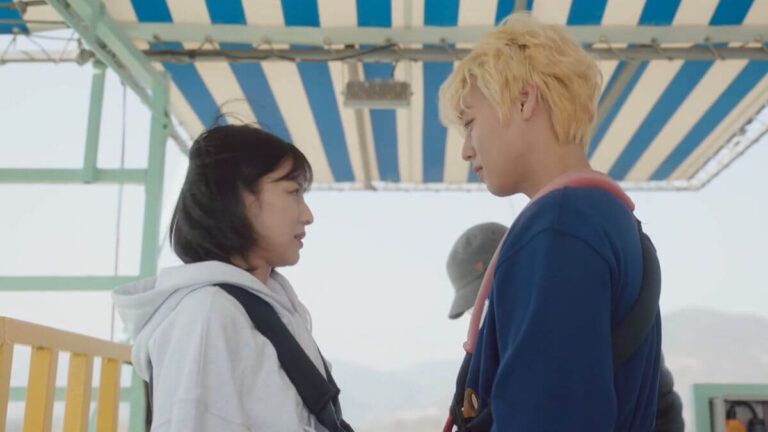 Park Ji-hoon, Kang Min-ah, and Bae In-hyuk create a triple treat in At A Distance, Spring is Green with their palpable chemistry, giving the audience a lot of reasons to root for in the series’ concluding episodes, now streaming at iQiyi and iQ.com.

Sweeping the Southeast Asian market with his boy-next-door charisma, Park Ji Hoon who debuted with boy band Wanna One, stars in this coming-of-age Kdrama after his role in the recent hit “Love Revolution”.  Ji-hoon continues to hit high marks along with Kang Min-ah (“True Beauty”) and Bae In-hyuk (“My Roommate is a Gumiho”) in “At A Distance, Spring is Green” as the series made it in South Korea’s Trending Dramas List and in the Top Ten Trending Drama Keywords List five weeks in a row.  Furthermore, after broadcasting on iQiyi in 191 countries and regions, “At a Distance, Spring is Green” even made it to the top three in Southeast Asia within three weeks, proving its domestic and international appeal. In the drama’s finale, Park Ji-hoon finally escapes from the claws of his abusive father and Bae In-hyuk reveals that there is someone he likes, making the audience rejoice.

Park Ji-hoon recalls that the bungee jumping scene from the first episode left a deep impression on him. He revealed that he filmed the scene himself and it only took one take, “I like feeling the thrill, so I actually wanted to jump a few more times. It was a pity I could only jump once. Due to my weight, I had to jump while hugging a doll, but it was a lot heavier than I thought. It also looked a lot like a real person, so it was very scary.”  Meanwhile, Kang Min-ah expressed that after plucking up the courage to bungee jump for the first time, she realized it was not as terrifying as she expected. This made her understand the truth in the words, “You will never know until you try.” However, she suddenly changed her stance and said, “But I don’t think I’ll ever try it again.”

Park Ji-hoon and Kang Min-ah both debuted as child stars. Due to this, Park Ji-hoon never experienced regular student life. He made a rare confession, “I’ve been working in the entertainment industry ever since I was young, so I don’t actually have many friends I am close and comfortable with.” Therefore, he truly resonated with his character Yeo Joon in the series, who is popular but barely has any close friends. His character is happy on the outside but also has a hidden dark side. These two contrasting personalities make him seem two-faced, which was the main reason that attracted Park Ji-hoon to accept this role. He admitted that he had a hard time when he first started filming the drama, “But after I got into character and tried my best to perform, I was able to naturally express these changes of emotions.”

Speaking of romance in student life, Bae In-hyuk experiences love on campus from his recent work in “My Roommate is a Gumiho” and now in “At a Distance, Spring is Green”. Compared to his role in “My Roommate is a Gumiho” who aggressively chases after Hye-ri, he prefers to be like the aloof Nam Soo-hyun in “At a Distance, Spring is Green”. “It’s because Soo-hyun always sacrifices and gives up everything for his family. He rarely thinks of himself and is very pitiful, so I hope he can live for himself one day and let both his mind and body be at ease.” In real life, Bae In-hyuk further shared that if a girl always finds excuses to avoid him like in “My Roommate is a Gumiho”, he will question himself, wondering if he has done something wrong. This would put a burden on him, so he would never aggressively go after her.

All the episodes of the Korean drama “At a Distance, Spring is Green” are available on iQiyi and iQ.com.

At a Distance, Spring Is Green