Based on the acclaimed, best-selling graphic novels co-created by Joe Hill and Gabriel Rodriguez, Locke & Key is a magical mystery that revolves around three siblings who move to their ancestral home after the murder of their father. They then discover magical keys that give them different powers and abilities.

At a roundtable interview, we had the chance to talk to actors Darby Stanchfield and Connor Jessup, who play mother and son Nina and Tyler Locke in the series. The co-stars talked about Locke & Key, their relationship with the other actors, and more.

On how different Locke & Key is from the other shows they've been on.

Darby Stanchfield: It is completely different from every show I've worked on. Specifically the last show I was on, Scandal was a political drama while this is a family show with a fantasy and murder mystery and it's full of magic and huge special effects so it's about polar opposite from my previous seven years stint.

Connor Jessup: I have done some science fiction stuff but I’ve never done anything like this and the sci-fi that I did was much more high concept in a way -- it was less grounded in the real world and in a real family. So this was a very new experience for me too.

On what attracted them to the story.

Connor Jessup: I had heard of the comics but I hadn't read them until I got the part, and I read them all in a weekend. I feel like I had the same experience a lot of people do when they read the comics, which is, I was so moved by just how beautiful they are. And how effectively and emotionally, they're able to use this wild magical device to explore in a really honest way. What it means to grow up, what it means to be a kid who's turning into an adult, what it means to hover right to teeter on that line and then have trauma to enter in your life, and what it means to grow up reform relationships through trauma. It’s all so interesting I think the comic moves through those themes really tenderly and wisely. And I think it's what gives depth and our hope is that that core emotionally is still there.

Darby Stanchfield: I have a very specific journey and how I read these comics. When I joined the project, showrunners Meredith and Carlton said very specifically to me that this is not a literal interpretation of Nina -- you’re not gonna be full-on drunk with tears streaming down your face in a leg brace. It was written very differently and they wanted me to bring myself and sort of my own interpretation to it. And so they gave me the comic books, but they just said, you know, just gently read these but there will be no literal interpretation. 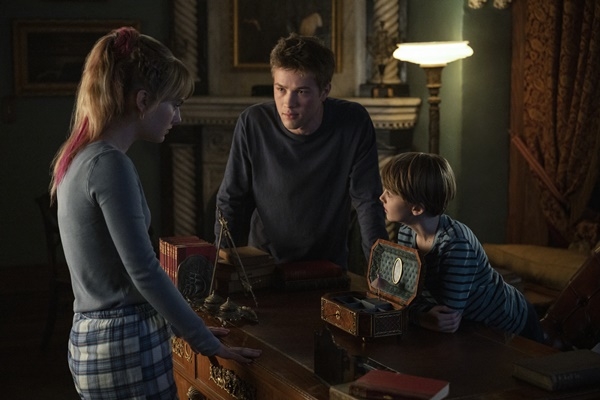 Connor Jessup: I feel really lucky because, in a way, I’m the oldest of the three of us. Jackson and Amelia were both from out of town since we shot in my hometown, so I felt like a big brother. And then I met them, and I realized they are both so much more capable and sophisticated than I am. You know you have these visions of being a mentor but they’re so far ahead of me. I met Amelia two weeks before we started shooting and I was thinking about it a lot because I knew that Tyler’s relationship with Kinsey is the center of this story in a lot of ways. I wish she was here on this call because she’s so intelligent, kind, warm and talented.

Darby Stanchfield: I agree. Earlier in this interview, I got a little choked up thinking about my experience of working with the three of them. It’s true that that natural chemistry just does it. It lays in the foundation and you kind of don't have to do much to get to work and have fun together.

Connor Jessup: They also make me so angry because when I was 17 and 10, I could barely talk my way out of a cardboard box. And meanwhile, I go to work every day and I so amazed by what Amelia and Jackson could do -- what they were bringing and by the way that they were animating these characters that they had so I’m in awe of both of them.

On owning a special key from the show.

Darby Stanchfield: I would have the music box so I could control the best chef in LA right now to cook me a huge dinner.

Connor Jessup: To be honest, we've answered this question a few times and our answers are maybe getting increasingly boring because it's getting more practical. My answer now is the plant key, because I have a garden at home that dies. I mean, I cannot keep anything alive. I love the idea of having full house plants, and I bought the most basic plant and I kill every single one of them. It's like I am a serial plant killer, and I feel that the plant key would solve some of my domestic problems. 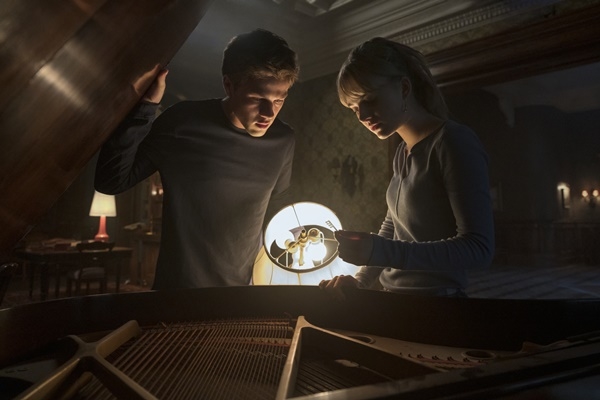 On a piece of advice they would give their characters.

Connor Jessup: What I want to tell Tyler… Well, because I’m 25 and Tyler is 17 and in a way, my relationship with Tyler is not that different than my relationship with myself when I was 17. And if I could go back to myself when I was 17, I would say, just take a breath. If you feel something just sit in it for a moment and then feel okay talking about it. So much of what Tyler's pain, angst and anxiety and what's causing a rift between him and his sister, his brother and his mom is the fact that he doesn't understand what he's feeling and he's not willing or able to just take a breath and feel it.

Darby Stanchfield: I think for Nina, it's less about what I would tell her. I think I would just give her a big hug. I think Nina needs a big hug. She's lost her husband and there's this fight that she has with herself about being a good mother and not being a failure and holding the family together.