Atlantis Theatrical Entertainment, under the direction of Bobby Garcia boldly takes on the challenge of staging Tony Kushner’s epic 2-part play ‘Angels in America,’ winner of the Pulitzer Prize for Drama and 11 Tony awards. Garcia has made the interesting decision to stage only 'Part 1: Millennium Approaches,' which on its own is already over three hours in 3 acts, and will stage 'Part 2: Perestroika' next year.

I’ll get to why this is such an interesting choice in a short while.

‘Angels in America: Millennium Approaches’ is already a dense work. It’s the story of HIV and AIDS in America in the mid-80s, told through the lives of several people in New York and how their lives collide as reality, fantasy, and history come crashing together. It is the story of Prior Walter (Topper Fabregas), who tells his lover, Louis Ironson (Nelsito Gomez), that he has AIDS at Louis’ grandmother’s funeral. At the same time, Joe Pitt (Markki Stroem), a Mormon and a Republican clerk, must make a choice between staying in New York for his pill-dependent wife, Harper (Angeli Bayani) or take the offer of his mentor, the abrasive lawyer and power broken Roy Cohn (Art Acuna), and go to Washington for a job at the State Department. 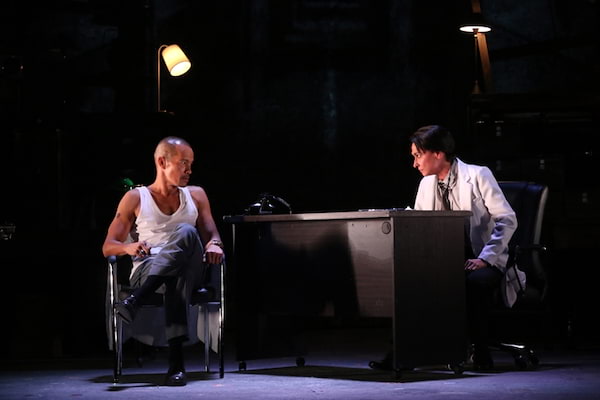 Their worlds collide when Ray discovers he too has AIDS, and Joe confesses to being a homosexual and becomes infatuated with Louis. After coming out to his mother over the phone, Louis’ mother (Cherie Gil) sells their house in Salt Lake City to join him, while Prior, comforted by his ex drag queen best friend Belize (Andoy Ranay), who is also his nurse, begins suffering from delusions and is visited by ghosts and hears the voice of an angel (Pinky Amador), warning him of her coming.

In the span of 3 acts, the play digs deep into the issues of discrimination, the immigrant experience, faith, power, corruption, love, abandonment, fear, sickness, racism, and obligations through the lives of these characters. Each scene packs a wallop. It's verbose discussion on any of these topics that constantly build on to each other, creating a larger tapestry of the human experience and all anchored somehow with Prior’s and Ray’s diagnosis of AIDS. 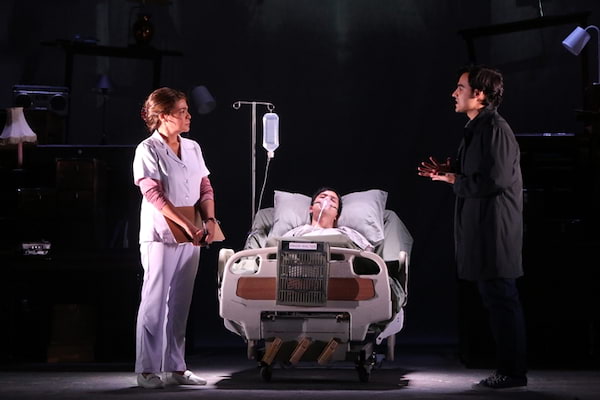 The effect is what I imagine getting hit by a speeding bus is like: a maelstrom of emotions and ideas, all coming together with the brunt force of harsh reality and an almost fantasy-like unexpectedness. Because in ‘Angels in America: Millennium Approaches,’ ghosts take form and speak to the living, and Harper’s pill-induced delirium brings her into dream-like states where she can actually have a conversation with Prior Walter, a person she’s never met but is connected to in ways she cannot fathom.

Despite its grand and epic scale, Garcia opts to contain every scene, bottling up these moments with the most minimalist of blocking. There is hardly any real movement. The actors, as wonderful as they all are, are stationary as they talk about these immense concepts and this stifling makes the play very uncomfortable. The energy is held together with the lack of kinetic energy. The play doesn’t breathe even as Louis struggles with whether it is right to leave his dying lover, or when Ray and Joe share a drink at a bar as Joe expresses his fears of leaving his wife for Washington, and when Ray decides to lie about his condition and says he has liver cancer. Sitting at the audience side, I needed it to explode but it hardly ever does. And it’s disconcerting.

The strongest it ever gets is every scene of Joe Pitt and Louis Ironson, as Stroem and Gomez navigate through their character’s awkwardness with each other and then steer into a meeting point of two people who need to find solace in each other. The restraint shown in the movements reflects their inner desire to connect and when they finally do, they are allowed to move from their current position and it’s liberating.

The other instance where it works is everytime Art Acuna’s Roy Cohn enters into any one of his speeches and he practically reverberates in place, itching to get up and pontificate and it’s that energy that ignites his scenes. It builds power and makes Roy Cohn such an incendiary character. 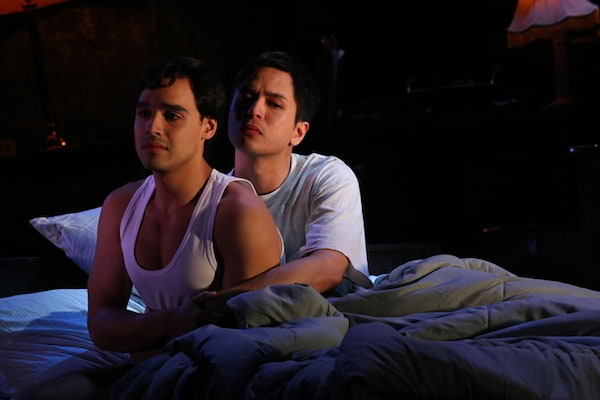 This is an amazing cast with several of the actors taking on multiple roles (with Cherie Gil’s rabbi being the most jaw-dropping of transformations) but it is Topper Fabregas as Prior Walter that really grabs you from the onset and shakes you to the core. He’s dying in front of you but he is also desperately grasping at life, at the love he’s lost, and maybe even his sanity as the fantasy presses on him the strongest. The angel is coming and she has something very important to say.

What is so affecting is that ‘Angels in America: Millennium Approaches’ ends at a cliffhanger. Part 1 has no real resolution. In its 3-hour running time, so much is brought out into the open and they are all left in the air, an entire universe of ideas and concepts that one is left to ponder on without any real guide as to how one should process it.

This is the daring of Bobby Garcia, his team, and his cast. Throughout the play, he keeps the moments contained in a sort of bubble, slowing allowing it to grow and expand like a flower, allowing more movement, more energy to escape until it reaches its magnificent crescendo at the finale and then lowers the curtain and tells us that it will be continued. 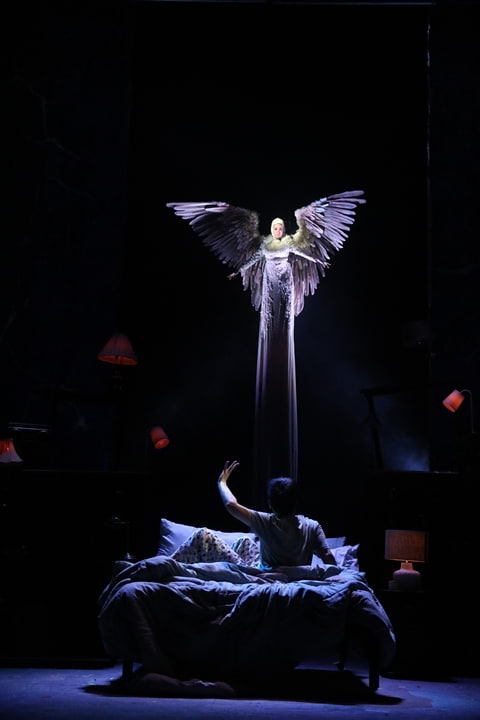 I cannot help but think that this is deliberate: to ask a question so deep and profound that one must take stock of everything around us before any sort of answer will be offered. And despite every theme that this play tackles, it all revolves around HIV and AIDS and the deterioration of traditions and conservative values. And when you look around at what is happening in our country: the rising HIV numbers and the conflict between conservative and progressive ways of thought, where none has given quarter and the struggle rages on, it now seems so fitting that ‘Angels in America: Millennium Approaches’ ends this way.

That Bobby Garcia, his team, and his cast will hold back the full bloom. The work has just begun, the flower is still blossoming, and we must be patient and do our part. I left the theater without any sense of release or as a friend said, “catharsis.” But that’s the point: it is far from over. It has been days since I caught the play and it’s still with me. I have to see it again. 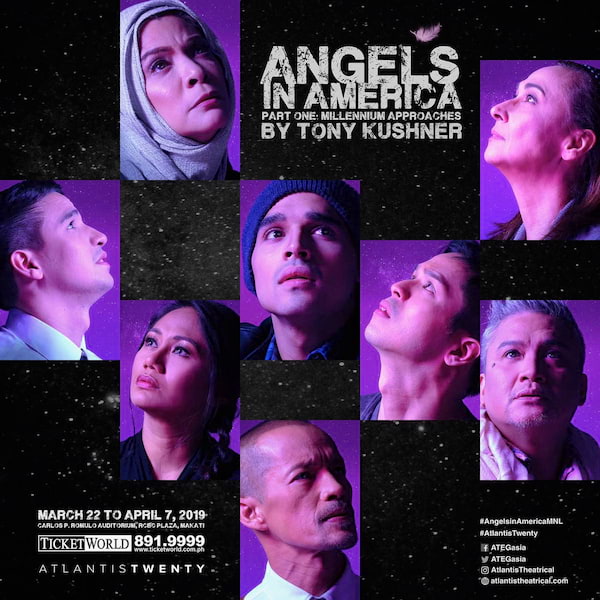 Angels in America: Millennium Approaches, the first part of Tony Kushner’s magnum opus, runs at the Carlos P. Romulo Auditorium, RCBC Plaza, Makati until April 7, 2019. For tickets, visit www.ticketworld.com.ph. The play contains strong language and mature content. Due to its subject matter, this show is strongly recommended to ages 17 years old and above.