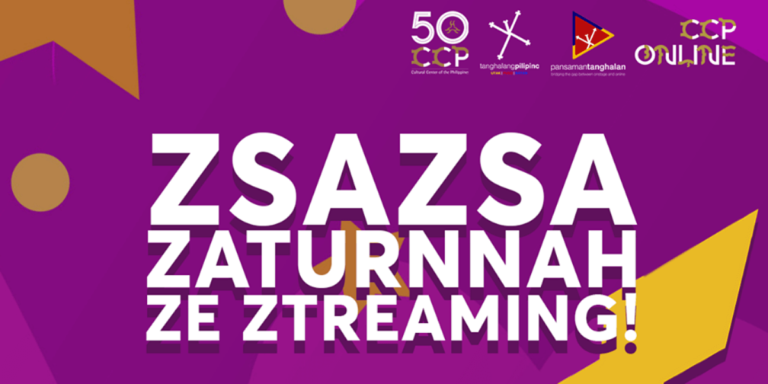 The Jologs superheroine is coming to our screens this Saturday!

Posted by Cultural Center of the Philippines on Tuesday, June 16, 2020

Fans of the longest-running show by Tanghalang Pilipino will be glad to hear its 2011 archival recording is set to premiere this June 20, 2020 on the CCP Online YouTube channel.

The CCP, in fulfilling its goal of making art matter to every Filipino, brings the people HD and archival recordings in theater, dance, visual arts, film, literary, and workshop events from its Cultural Content Digital Archives through CCP Online, an online platform available for access on the CCP Website and YouTube channel.

Watch as hairdresser Ada transforms into a Jologs superheroine Zsazsa Zaturnnah, and together with assistant Didi, they fight flamboyant zombies, fashionista aliens, and a giant dancing frog.

Right after the premiere, the casts of all past Zaturnnah stagings are set for a once-in-a-lifetime reunion like no other with Zsazsa Zaturnnah Ze REUNION, streaming live on the CCP Online Facebook page and Vimeo channel.  The Zoom reunion will be an evening of gays, games, fun, and laughter as the cast and artistic team of Zaturnnah reminisce their days on the stage with Zsazsa.

On Tuesday, 23 June, fans eager for discourse are all invited to watch Zsazsa Zaturnnah Ze DIZCUZZION, featuring thought leaders among the academe and LGBTQ+ sector.  Titled “Ikaw Ang Superhero ng Buhay Ko: A Roundtable Discussion on Queer Representation in the Arts,” it is a post-mortem forum discussing the musical and its relation to the queer community.

Zsazsa Zaturnnah Ze Muzikal was first staged on 2006, starring Eula Valdez as the titular Zsazsa Zaturnnah, with Tuxqs Rutaquio as Ada, and Ricci Chan as assistant Didi.  It is taken from the original comic book story written by Carlo Vergara, with libretto by Chris Martinez and direction by Chris Millado.  It enjoyed almost 6 years under the spotlight, earning it the title of Tanghalang Pilipino’s longest-running show.