Just Like Your Barkada: A Review of Upstart Manila’s ‘Company’

The music is beautiful, the songs memorable and touching, the company is charming and Fabregas presents us with a New York in the 70s that feels just like Manila now.

I was a little nervous when I heard that Upstart Manila was going to stage Stephen Sondheim’s 1970 Tony award-winning musical ‘Company.’ I’m quite familiar with the music and was lucky to have seen a DVD copy of the 2006 Broadway revival directed by John Doyle so I feel close enough with the material. The musical is steeped into New York life and tackles love and relationships and marriage from a 1970 viewpoint.

The musical and its book has aged very well and can still stand constant revisiting but my initial fears lay on how it would translate for a Filipino audience. Does a musical about a 33-year old single New Yorker and his relationship with love in relation to all his married friends resonate with a Philippine audience? Sure, it’s funny and witty and biting and insightful but it’s so Western and New York. 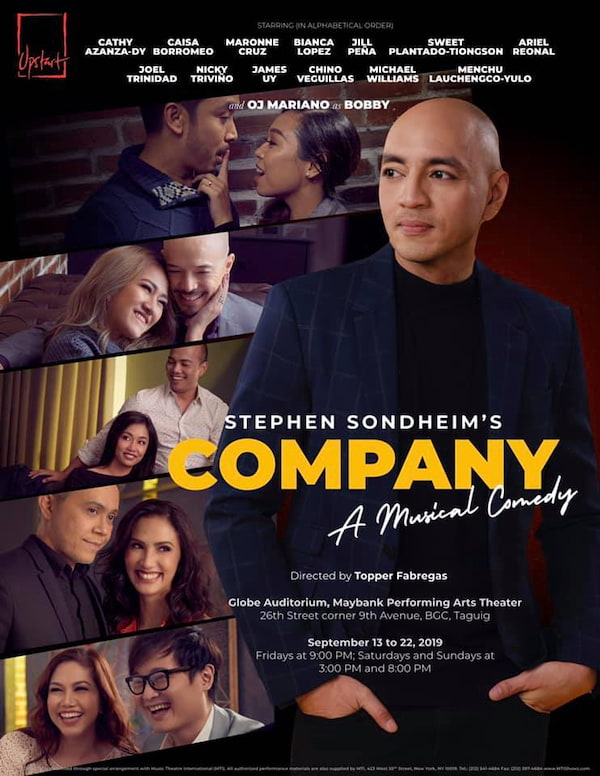 Director Topper Fabregas manages to expertly navigate through the obstacles and amplifies what is inherently Filipino about the play’s book. While there are definite nods to the 70s in the costumes, he never directs the play to really lean into the period, allowing the relationships of the characters to appear very much like a barkada. They are loud and intrusive and messy. The play is done in-the-round and Fabregas has them constantly re-adjusting benches for each vignette and blocking the characters to favor every side creating a flurry of movement that must feel especially claustrophobic in the first act for lead character Bobby (OJ Mariano).

The titular company of ‘Company’ are all of Bobby’s friends who, the majority of which, want him to settle down like they have. And they come in all shapes and forms. Even with dated terms and phrases taken straight from the 70s and references to New York, Fabregas allows the performances to take on a modern sensibility and rhythm and allows the actors to bring in a mentality that can feel very Pinoy without changing a line or lyric.

I have a personal bias to the play because I grew up with it so I’ve always wanted to see it live. Fortunately, Upstart Manila’s staging of ‘Company’ navigates the play’s setting and story and finds a connection in contemporary Philippine life. It figures out through its director’s vision a reason for its staging here.

What seals the deal is that the titular company of the musical is a wonderful mix of actors who really bring these characters to life. Of the men, it’s James Uy, who stands out with his performance of Paul, a man so devoted to his fiance that he drives her crazy right on her wedding day. The aforementioned fiance, Amy, is wonderfully played by the breathtaking Cathy Azanza-Dy, who absolutely nails her song “I’m Not Getting Married Today” and the panic attack that follows the song. Also giving standout performances are Bianca Lopez as Jenny and Maronne Cruz as April.

And then, of course, there is Menchu Lauchengco-Yulo, who plays the fierce Joanne. Her show-stopping rendition of ‘Ladies Who Lunch’ is already worth the price of the ticket. Her vignette becomes a testament to Lauchengco-Yulo’s commanding presence on stage as she practically assaults Bobby in a drunken staredown to push him towards the truth.

Unfortunately, despite a vibrant cast and brilliant direction, ‘Company’ revolves around the character of Bobby and OJ Mariano seems to be swallowed by the hustle and bustle of it all. The musical, as written, has Bobby come off as the glue that holds this group of people together. Bobby’s friends should be revolving around him but instead, Mariano appears overwhelmed by the swirl of the characters around him. It’s not easy to be the lead of such a complex musical and to be surrounded by such colorful characters, but Mariano has to get comfortable with being in the center of attention to truly land the powerful ending of the play.

Despite my caveats, ‘Company’ is a delightful treat. The music is beautiful, the songs memorable and touching, the company is charming and Fabregas presents us with a New York in the 70s that feels just like Manila now.