A production of any of Shakespeare’s plays would survive if it just focused on the graceful and elegant language of The Bard’s. While any reinterpretations and creative reimaginings are welcomed, Shakespeare’s words are enough on their own. So any additional creative elements should serve to enhance and not distract from the point of doing any of Shakespeare’s catalogue.

I think it is this major point which I found challenging in getting into the Theatre Titas' production of ‘MacBeth’ by director Carlos S. Carino. From the moment you enter Power Mac Center Spotlight, you are greeted with the sight of two of the three witches acting animalistic and entreating the audience to interact with them, and then growling and snarling when they wouldn’t. It was difficult to understand this convention at the beginning. It felt something more suited to ‘A Midsummer Night’s Dream’ and it was only later when the play began that I realised it was the witches. 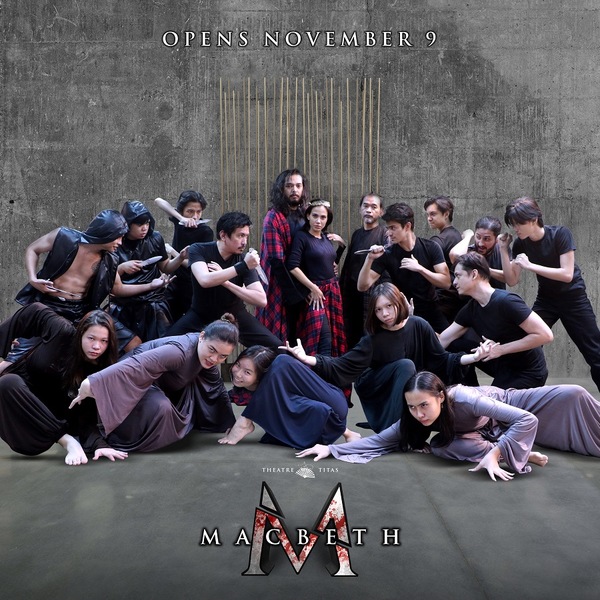 And as the play begins, I discovered that the witches were a whole coven. From the original three, the witches had no become seven or eight women talking over each other and acting like a mad chorus (and not always in harmony). It was an interesting idea but with all the voices, and not always in synch, there was so much that I didn’t get to hear in that very opening. I’m lucky I know ‘MacBeth’ and can follow the story. But the language was lost with this convention.

And it was like this throughout the production. There was a naturalistic style used for everyone and while I can appreciate the attempt to try and make the language more conversational, the words would get eaten as there seems to be an overall direction to go to the extreme.

All the characters were shouting, exclaiming every word and trying to reach high energy at every moment. It was quite jarring.

‘MacBeth’ is the story of a general who is told by three witches that he would be king. This plants the seed of ambition into MacBeth who then proceeds to murder the king with the aid of his wife and then they face the consequences that comes with such a choice.

In my experiences with the play, I’ve seen productions and movies that either focus on MacBeth’s ambition or his remorse. The play can go either way and productions can choose to interpret MacBeth as either power-hungry or a victim of taking his ambitions too far.

Interestingly enough, Tarek El Tayech makes for a wonderful representation of MacBeth. His initial approach felt new and refreshing. After hearing the prophecy of the coven of witches, he dismisses it as the ramblings of mad women. He chuckles and laughs it off but the moment the first sign that the witches’ prophecy is going to come true, he makes a sudden turn and takes it seriously. After the deed, his remorse is so severe that he goes mad. By Act III, and right before intermission, MacBeth is so far gone that he’s assaulting people at his own party, he’s rambling like a crazy person, with hair is on face and a crown he cannot put on his head.

I felt that the issues of the crown was more technical than directorial. Afraid it might fall off, Tarek El Tayech kept playing with it, putting it on, taking it off while rambling and it seemed like the perfect symbol for this production.

It didn’t fit. The light cues kept shifting at every turn which became distracting at some point. The coven of witches were in every scene, intruding into action. I am guessing the interpretation was that the coven were witnessing the trouble they caused, maybe even orchestrating it as they would sometimes shadow the movements of MacBeth or Lady MacBeth and this would pull focus and give the impression that MacBeth and Lady MacBeth were not in complete control of their actions. Does that take away blame from them? It was a convention that didn’t feel like it was working. There was a lot of shouting, the words were getting garbled, and there was so much movement and action.

With all of these conventions playing into Carlos Carino’s production, I felt less engaged with MacBeth’s dilemma than I was with all that was happening on stage.

Of everything that was taking me away from the play, it was Issa Litton’s performance of ‘Lady MacBeth’ that seemed to make the most sense. Like the direction of the play, Litton synched into the unfurling chaos and pushed her portrayal to its most extreme. It was such a big and loud performance that it just sort of settled so nicely into what was happening. It didn’t bring out the nuances of Lady MacBeth’s character but this was a production that chose spectacle over nuance, texture over content.

This was a difficult interpretation to engage with. It took too much liberty with the play that it felt unrecognizable to me. At the very minimal, I think Shakespeare’s words have to be at the forefront and this was not what was front and center of this production.

Theatre Titas' production of William Shakespeare’s MACBETH has performances from November 15-17 and 22-23, 2019, at Power Mac Center Spotlight, Makati. Tickets are available now for P1,000 via from www.ticket2me.net or by downloading the Ticket2Me app from the Apple Store or Google Play.

Fresh off the heels of their sold-out run of the 50th Anniversary staging of Paul Dumol’s Ang Paglilitis Kay Mang Serapio, Theatre Titas prolongs the Halloween season by bringing Birnam Wood to Makati by staging William Shakespeare’s MACBETH this November