Three of the country’s foremost R&B artists and digital stars also known as BuDaKhel when dishing out collaborations on their YouTube channels finally come together for their first major concert in the country with BUDAKHEL LIVE: THE BEST SOUNDS OF THE 90’S concert happening in the Newport Performing Arts Theater, Resorts World Manila on March 20, 2020 at 8:00 pm. 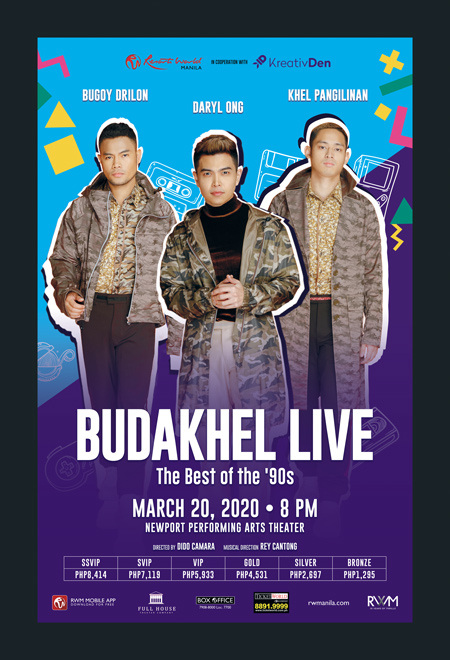 Michael Pangilinan first came out on the X Factor Philippines and became a household name when he competed in the second season of the top-rating celebrity game show Your Face Sounds Familiar. Daryl Ong showcased his vocal talents in such large-scale talent competitions as Pinoy Pop Superstar, The Voice of the Philippines Season 2 and as a member of Voices of 5. Meanwhile, Bugoy Drilon who is a Pinoy Dream Academy Season 2 alumnus is the more veteran among the three, having celebrated his 10th year with a sold-out concert on Kia Theater 2 years ago. Each made their mark in the industry with their powerful voices and just recently made waves in the digital world with their YouTube covers and collaborations.

Together as BUDAKHEL , Bugoy, Daryl and Michael will electrify audiences with their combined star power to bring out the best hits of their generation from the decade that spawned such vibrant genres such as Alternative Rock, Boyband Pop, and Hip Hop.

BUDAKHEL LIVE: THE BEST SOUNDS OF THE 90’S concert is directed by Dido Camara with musical direction from Rey Cantong and is presented by Resorts World Manila in cooperation with KreativDen. Tickets to the concert are available at the RWM Box Office and all TicketWorld outlets. Visit www.rwmanila.com or download the RWM Mobile App.