Japanese band One OK Rock is joining Pulp Live World's roster of shows for the year, with a concert set on May 2, 2020! The concert, happening at the Araneta Coliseum is part of the band's Eye of the Storm Asia Tour 2020. 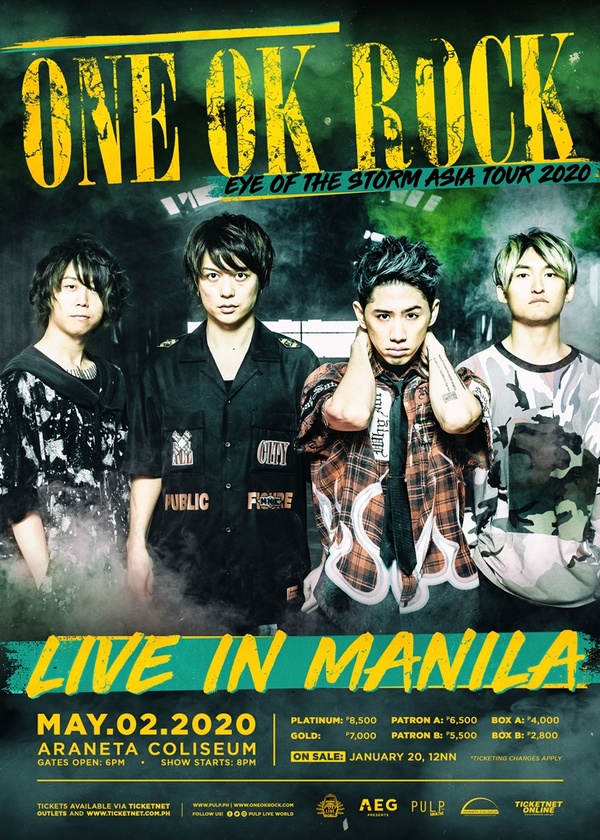 Taka, Toru, Ryota, and Tomoya will be bringing the band's new era to their fans, as they have gone through evolution and progress in the 15 years that they have been active in the industry. Since their formation, the band has already released 9 albums, with Eye of the Storm being their most recent one, which dropped back in February last year.

“Rather than it feeling like [other] albums we made, it feels like an extension of what we have been doing. And the fans, they have responded back—existing and new fans alike,” reflects ONE OK ROCK in an exclusive interview with PULP Magazine. “After all these years we are continuously evolving, taking a new shape. That’s Rock n Roll and that’s ONE OK ROCK!”

Tickets for the show go on sale this January 20 via TicketNet, and are priced as follows:

The show is brought to you by AEG Presents and Pulp Live World. For more information, you may keep checking back on Pulp's official Facebook page and Website.

Get ready as PULP Live World makes this new year even more exciting with its first announcement for 2020. ONE OK ROCK EYE OF THE STORM ASIA TOUR 2020 Live in Manila, happening on May 2, 2020 at the Araneta Coliseum.