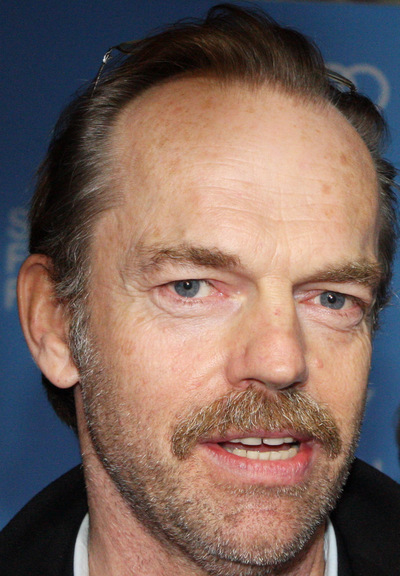 Hugo Wallace Weaving (born 4 April 1960) is an English film and stage actor. He is best known for his roles as Agent Smith in The Matrix trilogy and Elrond in the Lord of the Rings film trilogy and The Hobbit film trilogy. Other notable works include Tick in The Adventures of Priscilla, V in V for Vendetta, Red Skull in Captain America: The First Avenger and multiple roles in Cloud Atlas. He has also provided the voice Rex in Babe, Noah in Happy Feet and Happy Feet Two and Megatron in the Transformers film series as well as starring in numerous Australian character dramas. He has received many award nominations and wins during his career, including a Satellite Award, an MTV Movie Award and several Australian Film Institute Awards.

Weaving was born at the University College Hospital in Ibadan, Nigeria Protectorate, to English parents Anne (née Lennard), a tour guide and former teacher, and Wallace Weaving, a seismologist. His maternal grandmother was Belgian. A year after his birth, his family returned to England, living in Bedford and Brighton before moving to Melbourne, Victoria and Sydney, New South Wales in Australia; Johannesburg in South Africa; and then returning to England again. While in England, he attended The Downs School, Wraxall, Nr Bristol, and Queen Elizabeth's Hospital. His family moved back to Australia in 1976, where he attended Knox Grammar School in Sydney. He graduated from Sydney's National Institute of Dramatic Art in 1981.

When he was 13 years old, Weaving was diagnosed with epilepsy. He has been with his longtime girlfriend Katrina Greenwood since 1984 and the two live in Sydney and have two children together, Harry (b. 1989) and Holly (b. 1993).