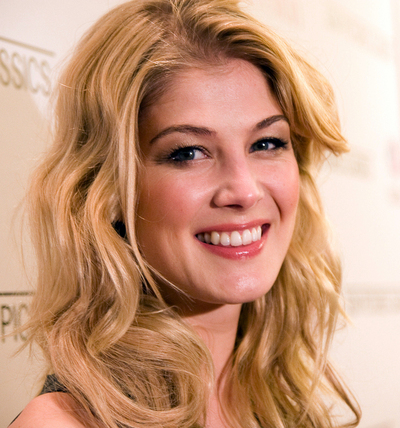 Rosamund Pike was born in Hammersmith, London, the only child of concert musicians/opera singers Caroline (née Friend) and Julian Pike. Pike's father is now a professor of music and head of Operatic Studies at the Birmingham Conservatoire.

The family traveled across Europe until she was seven, following wherever her parents' performing career took them; as a result, she is conversant in French and German. Pike won a scholarship to Badminton School in Bristol, and while appearing in a production of Romeo and Juliet at the National Youth Theatre, was noticed by an agent who helped her embark upon a professional career.

After being turned down by every stage school she applied to, she gained a place to read English Literature at Wadham College, Oxford from which she graduated  After taking a year off to pursue her acting career, garnering stage experience in David Hare's Skylight, Arthur Miller's All My Sons, and several plays by Shakespeare; she achieved an Upper Second class degree in 2001.

While she was still at university, Pike made appearances on British television shows, including A Rather English Marriage (1998), Wives and Daughters(1999), and Love in a Cold Climate (2001), a miniseries based on Nancy Mitford's novels The Pursuit of Love and Love in a Cold Climate. She also appeared as "Sarah Beaumont" in an episode of the series Foyle's War, during which she was required to smoke a cigarette almost constantly.

After graduating she considered working at Waterstone's bookshop, due to a lack of acting opportunities, but was offered a role as a Bond girl and MI6 agent assigned to aid James Bond in Die Another Day.  Pike then played Elizabeth Malet in The Libertine (2004), co-starring Johnny Depp, which won her the Best Supporting Actress award at the British Independent Film Awards.

While she was at Oxford, Pike had a two-year relationship with gay actor Simon Woods. She was engaged in 2007 to film director Joe Wright, but he called off the wedding in 2008.

Since December 2009, she has been dating Robie Uniacke. They have a son, Solo (born 6 May 2012). In June 2014 Pike revealed she is pregnant with the couple's second child.

Pike is a skilled cellist.