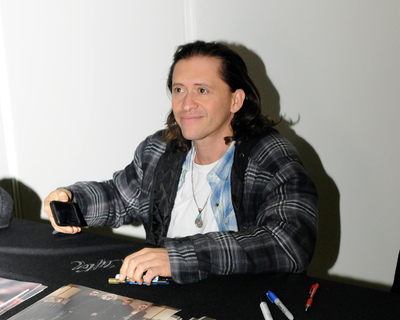 Clifton Craig Collins Jr. (born June 16, 1970) is an American actor. He has appeared in films such as Traffic, Capote, Star Trek, Pacific Rim and Triple 9. He has also appeared in a variety of television shows, such as The Event, Westworld and Thief, the last for which he received an Emmy Award nomination in 2006.

Collins was born in Los Angeles, California. He is the grandson of actor Pedro Gonzalez Gonzalez. He has sometimes been credited as Clifton Gonzalez-Gonzalez to honor his grandfather. He is of Mexican descent.

He first broke through the mainstream in 1997 with a performance as gang thug César Sánchez in the film One Eight Seven. In 1998, he was in Ray Bradbury's cult film The Wonderful Ice Cream Suit. He next portrayed a gay hitman named Francisco "Frankie Flowers" Flores for the Mexican drug cartels in Steven Soderbergh's 2000 ensemble drama Traffic. For his portrayal of a USMC prisoner in the 2001 film The Last Castle Collins was nominated for the 2002 American Latino Media Arts (ALMA) Award for Best Supporting Actor in a motion picture. In 2002, he played the role of Buddy in the film Confessions of an American Girl. In 2005, Collins won rave reviews for his subtle portrayal of killer Perry Smith in the fact-based film Capote, which was nominated for the Academy Award for Best Picture in 2006. He starred in the 2005 film Dirty alongside Oscar winner Cuba Gooding Jr. Collins starred on FX Networks' series Thief and received an Emmy nomination. Collins also played a supporting role on FX Networks' series The Shield as undercover ICE agent Hernan. He also has a small role in 2006's Babel, directed by Alejandro González Iñárritu.

In 2007, Collins took the lead role in the indie feature The Perfect Game, playing former baseball player Cesar Faz, who coaches a local Mexican youth league team, leading them all the way to the Little League World Series.

In 2008, Collins directed two music videos for the country music group Zac Brown Band: "Chicken Fried" and "Whatever It Is".

Collins starred in the comedy Sunshine Cleaning with Amy Adams, Emily Blunt and Alan Arkin. He played Winston, the owner of a cleaning supply shop who builds meticulously detailed model airplanes with only one arm. Collins played the part with one arm thrust tied behind his back. In 2009's Star Trek, Collins plays Ayel, a Romulan, second in command to the villain Nero.

In 2009, Clifton joined Adrien Brody and Forest Whitaker in the psychological thriller The Experiment.

Collins starred in Extract, a 2009 film by director Mike Judge.

Collins Jr. co-produced the film National Lampoon's TV: The Movie in which he played Officer Sanchez alongside Jacob Vargas. He also voiced the fictional video game character Cesar Vialpando in Grand Theft Auto: San Andreas. In 2009, he played Romeo in the film The Boondock Saints II: All Saints Day.

In 2010, Collins joined the cast of NBC's drama The Event as Thomas.

In 2015, HBO's science fiction drama Westworld added Collins as Lawrence / El Lazo, a charming but lethal outlaw, with a knack for maneuvering and negotiating the various criminal elements.

He wrote his first book, Prison Ramen: Recipes and Stories from Behind Bars with Gustavo "Goose" Alvarez, in 2015.