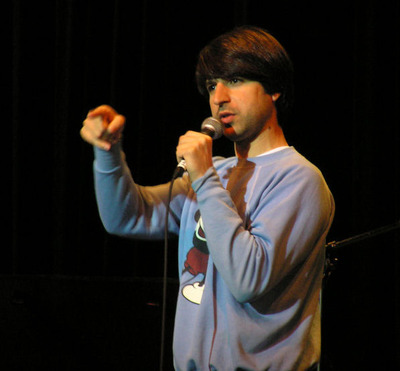 Demetri Evan Martin (born May 25, 1973) is an American comedian, actor, artist, musician, writer and humorist. Martin is best known for his work as a stand-up comedian, being a contributor on The Daily Show and for his Comedy Central show Important Things with Demetri Martin.

Demetri Martin was born to a Greek American family in New York City, New York, and grew up in Toms River, New Jersey. He is the son of Lillian, a nutritionist, and Dean C. Martin, now deceased, a Greek Orthodox priest. Martin graduated from Yale University in 1995. Although he was accepted into Harvard Law School, he went to New York University School of Law after he received a full scholarship.

In 2001, Martin caught his first big break in stand-up comedy when he appeared on Comedy Central's stand-up showcase Premium Blend. At the 2003 Edinburgh Festival Fringe he won the Perrier award with his show If I.... The show was turned into a British television special in 2004.

Martin is known for being an unconventional stand-up comic. He uses one-liners and drawings on a "large pad", as well as accompanying his jokes with music on either guitar, harmonica, piano, keyboard, glockenspiel, toy bells, ukulele, or tambourine, sometimes all at once. He has cited comedian Steven Wright as an important influence (both use deadpan one-liners in their acts) and he is also a fan of Bill Cosby.

According to a July 2011 interview on the WTF with Marc Maron podcast, Demetri had a short-lived marriage with Jen, a girl he knew from high school. They began dating after high school, and got married when he was in NYU Law School and she was attending NYU Medical School. This relationship was further analyzed in his one-man show Spiral Bound. Demetri remarried June 1, 2012 to long-time girlfriend Rachael Beame in Santa Monica, CA.