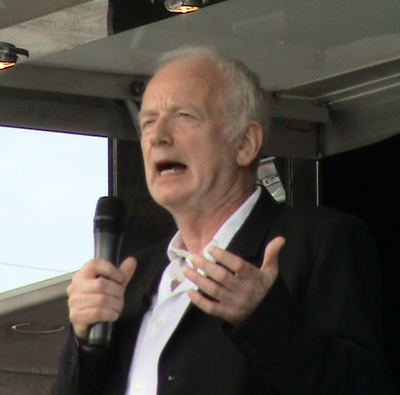 Ian McDiarmid (/məkˈdɜːrmᵻd/; born 11 August 1944) is an Olivier and Tony award-winning Scottish character actor and director. He has appeared in 47 films since 1976. Internationally, he is most famous for his role as Palpatine in the Star Wars film series.

McDiarmid was born in Carnoustie, Scotland. He became a theatre aficionado when he was five years old, when his father took him to see an act named Tommy Morgan at a theatre in Dundee. In 2004, he stated, "It sort of fascinated me, and it also scared me. All those lights, all that make-up. I said to myself, 'I don't know what this is, but I want it.'" However, fearing his father's disapproval, McDiarmid attended Queens College, Dundee, part of the University of St Andrews, where he received an M.A. in psychology. Soon after, he decided to pursue a career in the theatre instead, and took acting training courses at the Royal Scottish Academy of Music and Drama in Glasgow. In 1968, McDiarmid received a gold medal for his work, the first of many recognitions given to him for his work in the theatre. McDiarmid claimed he became its recipient "by doing all the boring jobs you have to do when you are young, to eke out an existence."

McDiarmid is renowned for his work in British theatre, having won plaudits as an actor and director from a wide variety of sources. He has starred in a variety of Shakespeare plays, including Hamlet (1972), The Tempest (1974, 2000), Much Ado About Nothing (1976), Ross and the Porter in Trevor Nunn's 1976 Macbeth (television 1978), The Merchant of Venice (1984) and King Lear (2005). From April to June 2012, he played the title role in Timon of Athens at Chicago Shakespeare Theater. He played Ivanov in Tom Stoppard's play Every Good Boy Deserves Favour at the Mermaid Theatre in 1978.

From 1990, McDiarmid and Jonathan Kent served as the artistic directors of the Almeida Theatre in Islington, London, gaining the commitment of prominent actresses such as Glenda Jackson and Claire Bloom for their productions. The two men resigned in 2001 with the venue in good shape. In 1998, they shared the Special Evening Standard Award for Theatrical Achievement of the Year. Their tenure was marked by a string of highly successful performances involving actors such as Kevin Spacey and Ralph Fiennes. While connected with the Almeida, McDiarmid directed plays such as Venice Preserv'd (1986) and Hippolytus (1991). In 2002, McDiarmid won Almeida Theatre's Critic's Circle Award for Best Actor for his role as Teddy in a revival of Brian Friel's Faith Healer. Five years later in 2006, he reprised this role in his debut on Broadway. Directed by Kent, he performed alongside Ralph Fiennes and Cherry Jones, and won the Tony Award for Best Performance by a Featured Actor in a Play.

One theatrical performance of note is his portrayal of Harry Hackamore in Sam Shepard's play Seduced. By McDiarmid's own description, Hackamore was a Howard Hughes-type character. To play the part, he was made-up in prosthetics, including a false beard and long fingernails. McDiarmid was only 37 at the time, and this convinced George Lucas and Richard Marquand that he could convincingly play a much older character in extreme cinematic close-up, which helped him land the role of Palpatine.

After a minor part in the film Dragonslayer, McDiarmid was cast by George Lucas in Return of the Jedi as Emperor Palpatine, the main villain. Sixteen years after appearing in Return of the Jedi, he reprised the role as the character's younger incarnation of Senator Palpatine and Sith Lord Darth Sidious in the prequel films: The Phantom Menace, Attack of the Clones, and Revenge of the Sith. The prequels had him play two faces to his character; he re-created his diabolical interpretation of Palpatine from Return of the Jedi when playing Darth Sidious, the Chancellor's Sith alter ego, but created a pleasant, charming character in Palpatine's public persona.

In the 2004 re-release of The Empire Strikes Back, a brief scene between Darth Vader and a hologram of Emperor Palpatine was updated to include McDiarmid. The Emperor was originally voiced by Clive Revill for that scene, and visually portrayed by Marjorie Eaton. With this addition to The Empire Strikes Back, McDiarmid has now appeared in every live-action film version in which Palpatine appears.

He has also worked with the Star Wars expanded universe as the voice of Palpatine in the video game adaptations of The Empire Strikes Back and Return of the Jedi, Super Star Wars: The Empire Strikes Back and Super Star Wars: Return of the Jedi. McDiarmid made a small appearance during Celebration Europe. On 23–26 August 2012, he attended Celebration VI in Orlando, Florida and had his own show titled The Phantom Menace: Ian McDiarmid, hosted by James Arnold Taylor, in which he talked about his experience working on Star Wars and how he landed the role of Palpatine. Ian McDiarmid also voiced a pig version of Palpatine for a promo video on Angry Birds Star Wars II, entitled "Join the Pork Side".

McDiarmid took an early role as Mickey Hamilton, a killer intent on avenging the death of his wife and child in The Professionals for London Weekend Television. In 1990, he starred in the Inspector Morse episode "Masonic Mysteries" as the psychopathic con man Hugo DeVries. In 1997, McDiarmid played the villain, Ronald Hinks, in the Touching Evil two-part episode "Through the Clouds/The Lost Boys". He played the role of police detective Porfiry Petrovich in the BBC's 2002 adaptation of Fyodor Dostoyevsky's Crime and Punishment. In 2003, McDiarmid took the role of the Stuart statesman Edward Hyde, in the BBC series Charles II: The Power and The Passion.

In 2005, he portrayed Satan in the 41-part BBC Four radio drama based on John Milton's Paradise Lost, which was subsequently re-broadcast on BBC7. Recently, he played the writer and pioneer of policing, Henry Fielding, in the Channel 4 historical drama series City of Vice and Denis Thatcher in 2009's Margaret.

In 2014, he played a leading role as British Foreign Secretary Sir Edward Grey in the BBC television drama 37 Days, which is about the diplomatic crisis preceding the First World War. He also had a recurring role on series 2 of Utopia, playing the role of Anton.