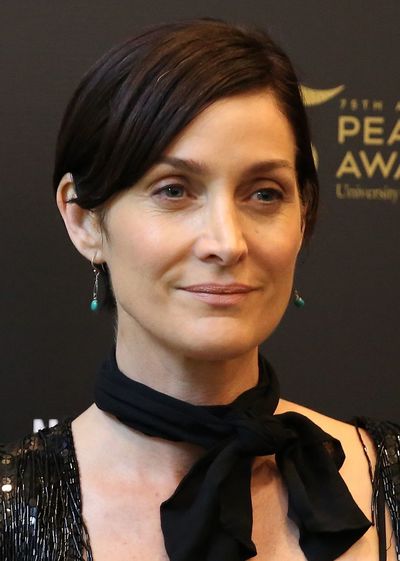 Carrie-Anne Moss (born August 21, 1967) is a Canadian actress, best known for her role of Trinity in The Matrix trilogy of films beginning with the sci-fi action film The Matrix (1999), her breakthrough film. She has starred in the neo-noir-psychological thriller film Memento, directed by Christopher Nolan, the sci-fi thriller Red Planet, and the romantic drama Chocolat (all 2000), the indie drama Snow Cake (2006), the Hitchcockian mystery horror-thriller film Disturbia (2007) and the controversial suspense thriller Unthinkable (2010). Moss currently stars as Jeri Hogarth in several series of the Marvel Cinematic Universe, mainly Jessica Jones.

Carrie-Anne Moss was born in Burnaby, British Columbia, the daughter of Barbara and Melvyn Moss. She has an older brother, Brooke. Moss' mother reportedly named her after The Hollies' 1967 hit song, "Carrie Anne", which had been released in May that year. Moss lived with her mother in Vancouver as a child. At the age of 11, she joined the Vancouver children's musical theatre and later went on to tour Europe with the Magee Secondary School Choir in her senior year.

While in Spain, Moss landed a role in the drama series Dark Justice, her first television appearance. She moved from Barcelona to Los Angeles with the series in 1992. She enrolled at the American Academy of Dramatic Arts in Pasadena upon her return. She starred in Fox's short-lived prime time soap opera Models Inc., a spin-off of Melrose Place, as a model.

Her breakthrough role came when she was chosen to play Trinity in the 1999 box office success The Matrix. She reprised the role in two sequels The Matrix Reloaded and The Matrix Revolutions, as well as providing voiceovers for video game and animated spin-offs of the film. Coincidentally, she had previously co-starred in an unrelated made-in-Canada television series also entitled Matrix.

Following the release of The Matrix, Moss starred opposite Burt Reynolds and Richard Dreyfuss in the Disney mobster comedy The Crew. She starred with Val Kilmer in Red Planet for Warner Bros. She next appeared in Miramax's Oscar-nominated film Chocolat. She then starred with Guy Pearce in the thriller Memento for which Moss earned an Independent Spirit Award for her performance. In 2006 she appeared in Fido and Snow Cake, and in 2007 she appeared in the thriller Disturbia. She voiced the character Aria in Mass Effect 2 and Mass Effect 3.

In 2015, Moss appeared in Jessica Jones as Jeri Hogarth. She reprised the role in 2016 in the season 2 finale of Daredevil, and in 2017 in Iron Fist and The Defenders.

Moss married actor Steven Roy in 1999. They have two sons and a daughter.