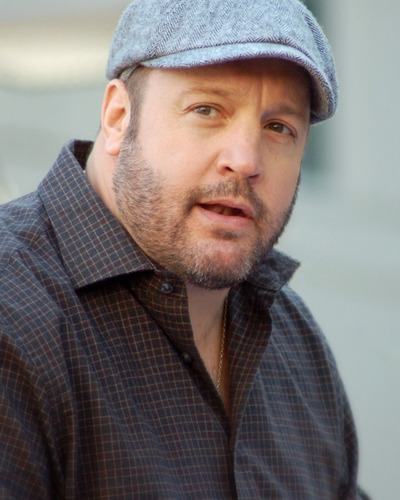 Kevin George Knipfing (born April 26, 1965), better known by his stage name, Kevin James, is an American comedian, actor, writer, and producer. Kevin James is widely known for playing Doug Heffernan on the hit CBS sitcom The King of Queens. He is also known for his lead roles in the comedy films I Now Pronounce You Chuck and Larry, Paul Blart: Mall Cop, Grown Ups, Zookeeper, Here Comes the Boom, and Hitch.

Kevin James was born Kevin George Knipfing in Mineola, New York and raised from a young age in nearby Stony Brook, both on Long Island. He is the second son of Janet, a homemaker who also worked in a chiropractor's office, and Joseph Valentine Knipfing, Jr, who owned an insurance agency. He is of German descent. He has a brother, Gary Joseph Knipfing, known as Gary Valentine, who is also a comedian and actor, and one sister, Leslie Knipfing. Leslie works for James and helped raise money through charity events for retinitis pigmentosa, with which she is afflicted. Kevin James was raised Catholic, and stated in 2012 that he is involved in his faith.

James graduated from Ward Melville High School. While there, he reached the number one spot on the wrestling team, just ahead of friend and WWE star Mick Foley. A season ending back injury resulted in Foley taking over the first string position. James went on to study at the State University of New York at Cortland, where he played halfback on the varsity football team until another back injury permanently ended his sporting hopes.

James began doing stand-up comedy in 1989, making his debut at the East Side Comedy Club on Long Island, managed by Richie Minervini. He gained popularity through numerous appearances on various talk shows, including The Tonight Show with Jay Leno, Late Show with David Letterman, Late Night with Conan O'Brien, Dennis Miller Live, The Late Late Show, The Rosie O'Donnell Show, The Ellen DeGeneres Show, and Live with Regis and Kathie Lee. James was listed at #89 on Comedy Central's list of the 100 Greatest Stand-Up Comedians. James has also done his stand-up routine on Just for Laughs, an annual comedy festival in Montreal, Quebec. Later he was on commercials for Mazzio's Italian Eatery. In 2001, James did his own stand-up special called Kevin James: Sweat the Small Stuff. He has also appeared as a musical guest on Just for Laughs.

James' first television job was in 1991 on The New Candid Camera, where he used his comedy timing & improv skills playing the actor that pulled the practical jokes on unsuspecting people. James appeared on television as the announcer for the MTV sports game show SandBlast from 1994 to 1996. James later moved to Los Angeles and befriended Ray Romano, and later guest-starred on a few episodes of Romano's hit CBS sitcom, Everybody Loves Raymond. These appearances led to the development of his own sitcom, The King of Queens, which ran on the same network from September 21, 1998 to May 14, 2007. James played the lead as content working class parcel delivery man Doug Heffernan, whose appeal is somewhat of the warm hearted-hijinxing buffoon type, who works for a company known as IPS and is married to Carrie (Leah Remini); a secretary at a Manhattan law firm who is less content with working class life in Queens as she desires the upper middle class lifestyle of an upton via Central Park in Manhattan. They live with his father-in-law, Arthur (Jerry Stiller). For his work on the eighth season, James was nominated for a Primetime Emmy Award for Outstanding Lead Actor in a Comedy Series.

James made his film debut in the 2005 romantic comedy, Hitch, alongside Will Smith and Eva Mendes. In 2006, he co-starred with his Everybody Loves Raymond colleague Ray Romano in the comedy Grilled, and provided voice work in the animated films Monster House and Barnyard. James co-starred with Adam Sandler in the comedies I Now Pronounce You Chuck and Larry (2007), You Don't Mess with the Zohan (2008), and Paul Blart: Mall Cop (2009). In the latter film, his character patrolled the West Orange Pavilion Mall on a Segway PT. The film opened as the #1 film in North America with a weekend gross of $39 million, despite overwhelmingly negative reviews, and eventually grossed $219 million from ticket and home video sales. More recently, James appeared in Grown Ups, which co-starred numerous Saturday Night Live alumni and was even more universally panned, yet was highly successful at the box office. In 2011, he had a lead role with Vince Vaughn in the comedy-drama, The Dilemma, and in Zookeeper, which he wrote and produced. In 2012, James had the lead role in the mixed martial arts comedy film Here Comes the Boom.

In 2004, James married actress Steffiana de la Cruz in California. Their first child, daughter Sienna-Marie, was born in 2005. Their second daughter, Shea Joelle, was born in 2007; she was named after the New York ballpark Shea Stadium. They welcomed their first son and third child, Kannon Valentine in 2011. Their third daughter and fourth child, Sistine Sabella, was born in 2015. James is the younger brother of comedian Gary Valentine (born Gary Knipfing), who played Doug's cousin Danny Heffernan on King of Queens. He is a close friend of retired MMA fighter Bas Rutten, and trains with him at his school in Thousand Oaks, California. James is also known for being a big sports fan, particularly of the New York Knicks, New York Jets, New York Mets, and New York Islanders, as well as the UFC. James attended high school with former professional wrestler Mick Foley. Both wrestled in high school. James was varsity, while Foley was JV. James, a Catholic, appeared on Catholic-themed channel EWTN's The World Over Live in 2012.