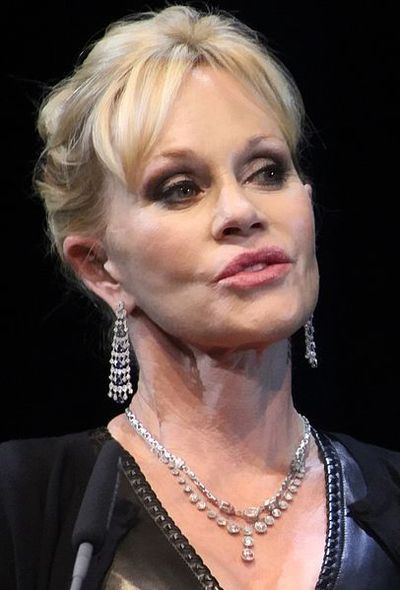 Melanie Griffith (born August 9, 1957) is an American actress. She was nominated for an Academy Award and won a Golden Globe for her performance in the film Working Girl (1988). She is the daughter of actress Tippi Hedren, and the wife of actor Antonio Banderas.

Griffith was born in New York City, to actress Tippi Hedren and producer, former actor, and advertising executive Peter Griffith. Her mother's ancestry is Swedish, German, and Norwegian. Griffith's parents divorced when she was four years old, after which her father married model/actress Nanita Greene and had two more children: actress Tracy Griffith and set designer Clay A. Griffith. Her mother married agent and producer Noel Marshall, and Griffith grew up with three stepbrothers. During her childhood and adolescent years, she divided her time between living in New York with her father and in Antelope Valley, California, where her mother formed the animal preserve Shambala. She also skipped a grade and graduated from Hollywood Professional School when she was 16 years old.

Griffith began work at just nine months old in a commercial and made her film debut as an extra in Smith! (1969). Her first credited roles were in Smile, The Drowning Pool, and Night Moves (all 1975), in which she did racy nude scenes at age 17. She also had a supporting role in the made-for-television movie Steel Cowboy (1978).

After many years in the business, in 1984 Griffith was cast in her first major role as a porn actress in the Brian De Palma thriller Body Double. The film, although a commercial failure, earned her the National Society of Film Critics Award for Best Supporting Actress, and led to her first leading role in Jonathan Demme's Something Wild (1986), which became a cult favorite. Griffith also starred in the cult science fiction film Cherry 2000, which went straight to video in 1988. She achieved mainstream success when Mike Nichols cast her as spunky secretary Tess McGill in the hit 1988 film Working Girl. Griffith's performance earned her an Academy Award nomination for Best Actress and won her the Golden Globe Award for Best Actress in a Musical or Comedy.

In May 1982, Griffith married Steven Bauer, her co-star from the TV film She's in the Army Now. They have a son, Alexander, born on August 22, 1985. The couple divorced in 1987. Griffith later admitted to having problems with cocaine and liquor after her divorce from Bauer. "What I did was drink myself to sleep at night," she said. "If I wasn't with someone, I was an unhappy girl."

After rehabilitation in 1988 Griffith reunited with Johnson and remarried him in June 1989 when she was five months pregnant. Their daughter, Dakota Johnson, was born in October 1989. She separated from Johnson in March 1994, reconciled later that year, and separated from him again in May 1995.

Griffith began a relationship with Antonio Banderas in May 1995 during the filming of Two Much. After their respective divorces were finalized, the couple married on May 14, 1996. In 2002, the couple received the Stella Adler Angel Award for their extensive charity work.