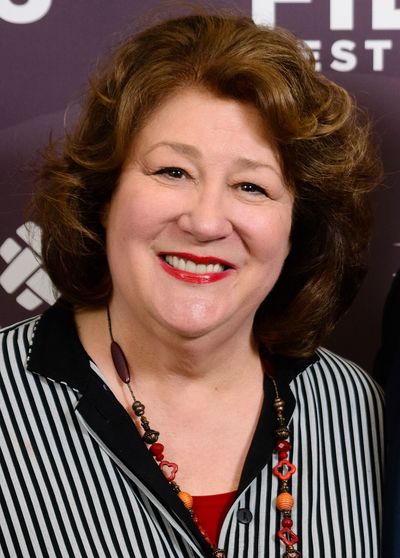 Margo Martindale (born July 18, 1951) is an American film, stage, and television actress. In 2011, she won an Emmy Award and a Critics' Choice Television Award for her recurring role as Mags Bennett on Justified and starting in 2013, she has been nominated for an Emmy Award three times for her recurring role as Claudia on The Americans, winning her second Emmy in 2015 for her appearance in season 3. She has played supporting roles in several films, including The Hours, Million Dollar Baby, Dead Man Walking, The Firm, Lorenzo's Oil, ...First Do No Harm, Eye of God, Win Win, Marvin's Room, Forged, Orphan, The Savages, Hannah Montana: The Movie, August: Osage County, and Paris, je t'aime.

Martindale was also nominated for a Tony Award for Best Featured Actress in 2004 for her performance in the play Cat on a Hot Tin Roof. She was a series regular on The Millers.

Margo Martindale was born July 18, 1951 in Jacksonville, Texas, the youngest of three children and only daughter of William Everett and Margaret (Pruitt) Martindale. In addition to owning and operating a lumber company in Jacksonville, her father was known as a champion dog handler in Texas and throughout the southern United States.

Following graduation from Jacksonville High School in 1969, Martindale attended Lon Morris College, then transferred to the University of Michigan at Ann Arbor. While at Michigan, she did summer study at Harvard University, appearing onstage with future movie and TV stars Jonathan Frakes and Christopher Reeve.

In the early 1980s, Martindale worked for four years at the Actors Theatre of Louisville in Kentucky. While there she became good friends with fellow actress Kathy Bates. Margo Martindale made her Broadway debut in 2004 as Big Mama in Cat on a Hot Tin Roof. She received a Tony Award nomination for Best Featured Actress in a Play, for her work in the role. Prior to that, Martindale had starred in several Off-Broadway stage productions, most notably as Truvy Jones in the 1987 production of Steel Magnolias. Other Off-Broadway appearances include Always...Patsy Cline and The Sugar Bean Sisters.

Her film roles include turns as Susan Sarandon's character's fellow nun in Dead Man Walking, and, again with Sarandon, in Lorenzo's Oil. She appeared as Leonardo DiCaprio's character's doctor in Marvin's Room; and as Hilary Swank's character's selfish mother in Million Dollar Baby. Other films include The Human Stain with Anthony Hopkins and Nicole Kidman, 28 Days with Sandra Bullock, Proof of Life with Russell Crowe and Meg Ryan and Practical Magic again with Nicole Kidman and Sandra Bullock. She was also featured in Paris, je t'aime, starring in the final segment directed by Alexander Payne. She played Mama Cox in the 2007 film Walk Hard and played Ruby, Miley Stewart's maternal grandmother, in Hannah Montana: The Movie and Miss Elizabeth Ham in the movie Secretariat, starring Diane Lane.

Martindale had a role in August: Osage County (2013), a film adaptation of the Pulitzer Prize-winning play by Tracy Letts. She played Mattie Fae Aiken, the sister of lead character Violet Weston (Meryl Streep). Other major cast in the project included Julia Roberts, Juliette Lewis, and Sam Shepard. Filming took place in the fall and winter of 2012.

One of Martindale's first television roles came in the miniseries Lonesome Dove. A series of character and guest appearances followed in a wide range of TV shows. Martindale played recurring character Camilla Figg on the first three seasons of Dexter and had a recurring role in the A&E courtroom drama 100 Centre Street with Alan Arkin. In 2007–2008, she had a recurring role as Nina Burns, a neighbor of the Malloy/"Rich" family in The Riches with Minnie Driver and Eddie Izzard.

In 2011, Martindale joined the cast of Justified for the second season. She played the role of Mags Bennett, matriarch of the Bennett crime family which controlled much of the drug activity in the fictional version of Harlan County, Kentucky. She won the Primetime Emmy Award for Outstanding Supporting Actress in a Drama Series for her performance. After learning of the nomination, Martindale told CNN she hoped that it would open up more doors for older women in Hollywood. "People really identify with this character [Mags Bennett] and I think it's because it is a character that is powerful and older and extremely mean," said Martindale.

She won Best Supporting Actress in a Drama Series at the Critics' Choice Television Awards for her role as Mags Bennett. In her acceptance speech Martindale said "Who said turning sixty was a bad thing" and "I'm so excited, and dead on this show," making reference to the self-inflicted demise of her character in the Justified season 2 finale.

In February 2012 it was announced Martindale had been cast in the ABC comedy pilot Counter Culture, which was not picked up.

Martindale returned to television in late January 2013 in the spy drama The Americans on FX Network. She plays Claudia, the KGB "handler" of two Soviet spies living in 1980s Cold War America. She also starred in the sitcom The Millers on CBS. In 2015, she began a recurring role as Ruth Eastman, Peter Florrick's new campaign manager on The Good Wife.

Martindale also appears as a fictionalized version of herself on the Netflix animated comedy BoJack Horseman. Bojack consistently refers to her as "Character Actress Margo Martindale."

Margo Martindale has been married to musician Bill Boals since 1986. They have a daughter, Margaret.