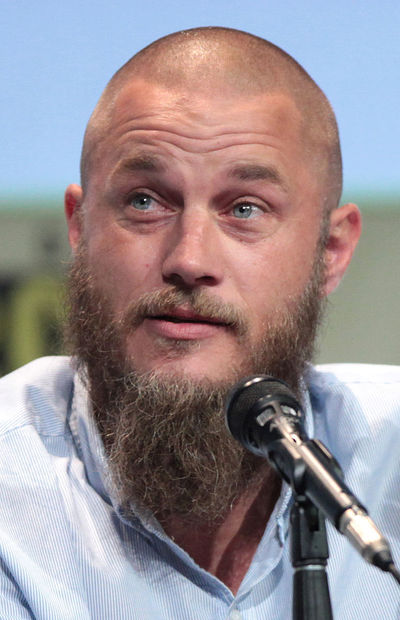 Travis Fimmel (born 15 July 1979) is an Australian actor and former model. He is best known for his high-profile Calvin Klein campaign, for co-starring opposite Patrick Swayze in the TV series The Beast and for his role as Ragnar Lothbrok in the History Channel series Vikings.

Fimmel was born near Echuca, Victoria. He was raised on a 5,500-acre dairy farm in Lockington. The youngest of three brothers, he is the son of Jennie, a recreation officer for the disabled, and Chris, a cattle farmer, and is of English and German descent. Aspiring to be a professional Australian rules footballer, Fimmel moved to Melbourne in his late teens to play for the St Kilda Football Club in the AFL, but a broken leg sidelined him before the season began. He was accepted into RMIT to study commercial architecture and engineering but later deferred to travel abroad.

Fimmel's modelling career first began when he was spotted working out at a gym in the Melbourne suburb of Hawthorn by the flatmate of Matthew Anderson, a talent scout for the prestigious Chadwick Models agency.

Fimmel headed overseas and was signed on the spot with agency LA Models in 2002 after walking into their office broke and barefoot. He then became the first male in the world to secure a six-figure deal to model exclusively for Calvin Klein for a year. He fronted CK's Crave men's fragrance campaign and modelled the brand's famous underwear. It was reported that one of his London billboards had to be pulled down after complaints from an auto club of traffic congestion and accidents by 'rubbernecking' female drivers, but Fimmel insisted the story started with a rumour spread on the internet.

He was named one of the world's sexiest bachelors by America's People magazine in 2002 and at the time was regarded as "the most in-demand male model in the world". It has even been suggested by some journalists that Fimmel was the inspiration for Sex and the City heartthrob 'Jerry' Smith Jerrod.

Fimmel appeared on various magazine covers, including France's Numero Homme and America's TV Guide, as well as on top-rating American TV shows in 2003 including Jimmy Kimmel Live!, The Sharon Osbourne Show, Live with Regis and Kathie Lee, MTV's Total Request Live and entertainment TV news program Extra. He also made a cameo appearance in the bar scene of a video clip for Janet Jackson's "Someone to Call My Lover" and played a hunk loading hay onto the back of a pick-up truck in Jennifer Lopez's "I'm Real" (original version).

Preferring to be known for his acting rather than his modelling, Fimmel turned down an offer from Australia's Seven Network to be a guest judge on the TV series Make Me A Supermodel.

Fimmel studied under Hollywood acting coach Ivana Chubbuck, taking two years to pluck up the courage to audition for his first role, saying "half of acting is overcoming your fears [and] letting yourself be vulnerable in front of people". He landed the title lead in Warner Bros. 2003 TV series Tarzan, described by CNN as one of the "five hottest things happening in entertainment right now”, in which he did most of his own stunts. In addition, he appeared in the studio's pilot Rocky Point (with Lauren Holly) in 2005, the Fox movie Southern Comfort (with Madeleine Stowe) in 2006 and The Big Valley with Richard Dreyfuss and Jessica Lange in 2011.

Fimmel has played a diverse spectrum of characters on the small and big screens. In 2008, he portrayed a murderer in Restraint and a party boy in Surfer, Dude with Matthew McConaughey and Woody Harrelson. In 2010, he portrayed a compassionate cowboy in Pure Country 2: The Gift and a forensic photographer in Australian horror movie Needle, co-starring Ben Mendelsohn.

He depicted a talented classical pianist in Ivory, a “creative, edgy, out-of-the box” independent film that was an Official Selection in the 2010 Montreal World Film Festival and the Strasbourg International Film Festival. Produced by Academy Award-winner Gray Frederickson and co-starring Martin Landau and Peter Stormare, Ivory "details the troubled lives of classical pianists at a major American conservatory as they confront personal and professional rivalry during the rigors of training".

It was Fimmel's role as Helweg, a cheeky-but-brutish prison guard, that saw him star opposite Academy Award recipients Adrien Brody and Forest Whitaker as well as Cam Gigandet in the 2010 film release The Experiment. It was reported that the role originally went to Elijah Wood, who pulled out of shooting for reasons unknown, so Fimmel instead took the job. The film is based on a real-life experiment on volunteers by Stanford University that was cut short after spinning out of control, with 'guards' exhibiting sadistic behaviour and 'prisoners' suffering depression.

Fimmel's TV profile received a boost when he starred opposite Patrick Swayze in cable network A&E's 2009 series, The Beast (screened in Australia on ABC2). He played rookie undercover FBI agent Ellis Dove partnered with a hardened veteran cop, Swayze's Charles Barker. Fimmel's character relies on his wits to navigate a high-pressure environment, browbeaten by Barker and resisting attempts by Internal Affairs to force him to spy on his mentor. Production ceased after 13 episodes due to Swayze's death from pancreatic cancer.

He then played fugitive Mason Boyle in two episodes of NBC's 2010 action-adventure Chase (season 1, episodes 1 and 8), produced by Emmy Award-winning Jerry Bruckheimer. Fimmel depicted a dangerous man on the run after a murderous rampage, tracked down by a team of US marshals who later try to enlist his help in nabbing a serial killer.

Fimmel appeared in FX's TV pilot Outlaw Country in 2011 with Luke Grimes, described as a “modern drama set against the back drop of a southern organized crime family”.[34] According to Variety magazine, he plays a rugged, “hard-drinking gang member and the main character's best friend”.

He co-starred with Billy Bob Thornton and Eva Longoria in the 2013 redneck Southern comedy flick The Baytown Outlaws. He played one of the three hapless Oodie brothers who bites off more than he can chew when he agrees to help a woman get her godson back from her deadbeat ex-husband.

Displaying a penchant for tough characters, Fimmel plays the lead in 2012's Harodim (originally called The Lazarus Protocol) with Peter Fonda as a former intelligence officer trained in black ops tracking down the world's most wanted terrorist who is compromised by his own chain of command. A thriller blending a fictional narrative with actual news footage, the film was shot in 21 days among disused ironworks outside of Vienna.

BlackBoxTV, a horror, science fiction and thriller channel featured Fimmel in Reawakening. He is cast with another Calvin Klein model-turned-actor, Dylan Bruno, as a fat murdered cop who gets a chance to settle a few scores through a body swap with a superior human.

Fimmel was signed as the lead character in the television series Vikings, co-starring Jessalyn Gilsig, Katheryn Winnick and Gabriel Byrne. Premiering in 2013, the show was filmed in Ireland over 18 weeks and chronicles "the extraordinary and ferocious world of the mighty Norsemen who raided, traded and explored during medieval times." He plays Ragnar Lothbrok who is loosely based on Ragnar Loðbrók, the legendary Viking leader who is frustrated by the unadventurous tendencies of his local chieftain and strikes out to pillage new lands. USA Today described Fimmel's performance as "engaging", while the Huffington Post called it his "breakout role". Created by renowned writer and period drama specialist Michael Hirst, Vikings is distributed globally by Metro-Goldwyn-Mayer (MGM). Episodes were directed by Ciarán Donnelly (The Tudors, Titanic: Blood and Steel), Ken Girotti (Law & Order: Criminal Intent) and Johan Renck (Breaking Bad).

Fimmel will be starring in Warcraft, a live action adaptation based on the video games of the same name.