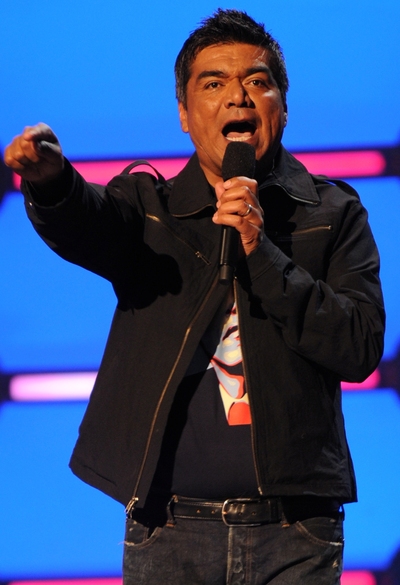 George Lopez (born April 23, 1961) is an American comedian, actor, and talk show host. He is mostly known for starring in his self-produced ABC sitcom George Lopez. His stand-up comedy examines race and ethnic relations, including Mexican American culture. He was the host of the late-night talk show Lopez Tonight on TBS until its cancellation on August 12, 2011.

In 2000, after several years of performing stand-up comedy, Lopez was approached by actress Sandra Bullock for Lopez to produce and star in a comedy. Bullock was concerned about the lack of Hispanic-oriented sitcoms on American television and pushed to get a sitcom on television that starred Hispanics without being exclusively about the Hispanic American community. Long criticized by Hispanic American groups for lack of Latinos on their television shows, ABC quickly picked up the television series. In 2002, Lopez became one of the few Latinos to star in a television comedy series, following in the footsteps of Desi Arnaz, Freddie Prinze, and John Leguizamo. George Lopez is an American situation comedy that originally aired on ABC from 2002–2007. Lopez is the co-creator, writer, producer, and star of the show.