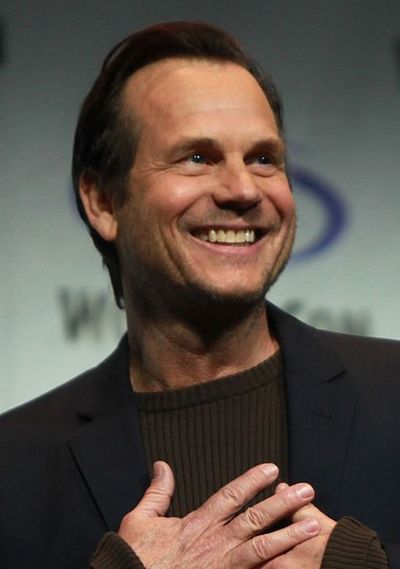 William "Bill" Paxton (born May 17, 1955) is an American actor and film director. He gained popularity after starring roles in the films Apollo 13, Weird Science,Twister, Aliens, True Lies, and Titanic. Paxton starred in the HBO series Big Love (2006–2011) and was nominated for an Emmy Award for the miniseries Hatfields & McCoys.

Paxton was born and raised in Fort Worth, Texas, the son of Mary Lou (née Gray) and John Lane Paxton, a businessman, lumber wholesaler, museum executive, and occasional actor. He was raised Roman Catholic, his mother's religion.

Paxton was in the crowd waving when President John F. Kennedy emerged from the Hotel Texas in Fort Worth, on the morning of his assassination, November 22, 1963. There are pictures at the Sixth Floor Museum in Dallas where 8-year-old Paxton can be seen lifted above the crowd.

Some of Paxton's earliest roles include a minor role as a punk thug in The Terminator (1984) and as a supporting role as a bully older brother in John Hughes' Weird Science (1985). He would have a much more significant supporting role in the sci-fi blockbuster Aliens (1986). In addition to The Terminator and Aliens, Paxton has collaborated with director James Cameron on True Lies (1994) and Titanic (1997), which was the highest grossing film of all time at its release. Four years after appearing in Titanic, he joined James Cameron on an expedition to the actual Titanic. A film about this trip, Ghosts of the Abyss, was released in 2003.

Paxton has appeared in such films as Weird Science,Aliens, Apollo 13, Near Dark, Twister, Titanic, One False Move and True Lies. Four years after appearing in Titanic, he joined James Cameron on an expedition to the actual Titanic. A film about this trip, Ghosts of the Abyss, was released in 2003.