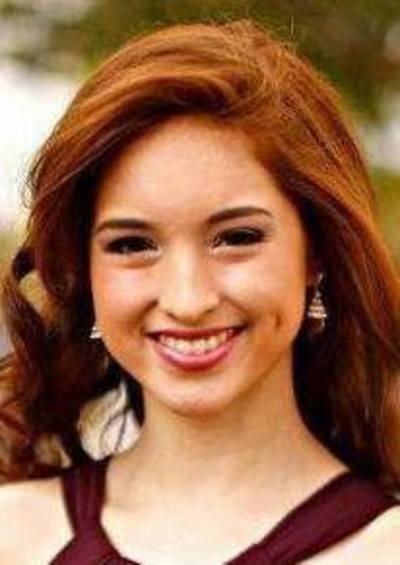 Coleen Ortega Garcia (born September 24, 1992) is a Filipino commercial model and actress. From 2012 to 2016 she was a host on the variety show It's Showtime, having since left the programme to focus on her acting career. She since starred in the 2016 film Love Me Tomorrow.

Garcia studied at the Southville International School and Colleges in Las Piñas from nursery until sixth grade, then transferred to Veritas Parochial School, BF Homes, Phase 1 also in Parañaque, where she served as an editor-in-chief for their high school paper The Wire and part of the school's student council and outreach program. She returned to Southville for college, where she is taking up psychology through blended learning. Garcia is of:

Garcia started as a commercial model as early as age 2, when she and her mom appeared in a commercial for Johnson & Johnson. At nine years old, she was an image model for Just G, the teens line for Gingersnaps. As she entered her teen years, she starred in a commercial endorsement alongside John Lloyd Cruz for Skin White, Lewis & Pearl Cologne alongside Enrique Gil as "Angel" and as "Matina" for Nestea alongside Neil Coleta.

Garcia has been under contract with ABS-CBN's Star Magic group of talents since 2011. She first appeared in Maalaala Mo Kaya episode School I.D., and was cast alongside ex-Lewis & Pearl partner Enrique Gil and ex-PBB Teen housemates James Reid, Devon Seron, Fretzie Bercede and Yen Santos in a teen-oriented show Good Vibes. She also made appearance in other ABS-CBN shows and teleseryes such as My Binondo Girl, Wansapanataym, Oka Tokat, Little Champ, among others. In 2012, Garcia became a co-host for the noontime variety show It's Showtime. In January 2016, she announced that she had departed It's Showtime to prioritize her acting career. She starred in the afternoon primetime teleserye Pasión de Amor. After Pasion de Amor, she is set to star a pre-afternoon drama series together with Gerald Anderson, Kim Chiu and her Pasion de Amor co-cast, Jake Cuenca.