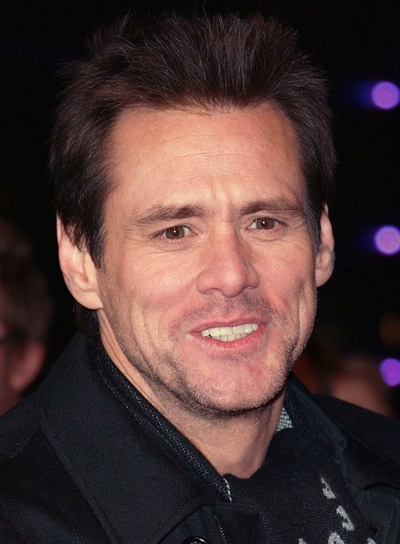 James Eugene "Jim" Carrey (born January 17, 1962) is a Canadian American actor, comedian, and producer. Carrey has received four Golden Globe Award nominations, winning two. Known for his highly energetic slapstick performances, he has been described as one of the biggest movie stars in Hollywood.

Carrey first gained recognition in 1990 after landing a recurring role in the sketch comedy In Living Color. His first leading roles in major productions came with Ace Ventura: Pet Detective (1994), Dumb and Dumber(1994), The Mask (1994), and Ace Ventura: When Nature Calls (1995). In 1997, he gave a critically acclaimed performance in Liar Liar, which earned him a Golden Globe Award nomination for Best Actor. He then starred in the critically acclaimed hits The Truman Show (1998) and Man on the Moon (1999), with each garnering him a Golden Globe Award for Best Actor.

In 2000, he gained further recognition for his portrayal of the The Grinch in How the Grinch Stole Christmas. Three years later, Carrey starred in the major blockbuster film Bruce Almighty (2003). The following year he starred in Eternal Sunshine of the Spotless Mind (2004), for which he received another Golden Globe nomination in addition to a BAFTA Award nomination. He then starred in popular productions Lemony Snicket's A Series of Unfortunate Events(2004), Fun with Dick and Jane (2005), Yes Man (2008), and A Christmas Carol (2009). More recently, he has starred in Mr. Popper's Penguins (2011) and The Incredible Burt Wonderstone (2013).

In 2013, he appeared in Kick-Ass 2 as Colonel Stars and Stripes. Controversially, he retracted support for the movie two months prior to its release. He issued a statement via his Twitter account that, in light of the shootings at Sandy Hook Elementary, "[N]ow in all good conscience I cannot support that level of violence."

Carrey agreed to reprise his role as Lloyd Christmas in Dumb and Dumber To, which was produced in late 2013 and is scheduled for a November 2014 release.

James Eugene Carrey was born in Newmarket, Ontario, Canada, the son of Kathleen (née Oram), a homemaker, and Percy Carrey (1927-1994), a musician and accountant. He has three older siblings, John, Patricia, and Rita. He was raised Roman Catholic. His mother was of French, Irish, and Scottish descent and his father was of French Canadian ancestry (the family's original surname was Carré).

During an interview with James Lipton at The Actor's studio, Carrey stated,

"My father was a musician who got a 'regular job' to support his children. When he lost his job that's when everything fell apart. We went from 'lower middle class' to 'poor'. We were living out of a van. I quit school at age 15 to begin working to help support my family as a janitor. I'd have a baseball bat on my janitor cart because I was so angry I just wanted to beat the heck out of something."

After his family moved to Scarborough, Ontario, he attended Blessed Trinity Catholic School, in North York, for two years, enrolled at Agincourt Collegiate Institute for another year, then briefly attended Northview Heights Secondary School. Jim never finished high school because he worked full-time to help his family survive the severe economic hardship, and also helped care for his mother who battled a severe, chronic illness.

Carrey lived in Burlington, Ontario, for eight years, and attended Aldershot High School, where he once opened for 1980s new wave band Spoons. In a Hamilton Spectator interview (February 2007), Carrey remarked, "If my career in show business hadn't panned out I would probably be working today in Hamilton, Ontario at the Dofasco steel mill." When looking across the Burlington Bay toward Hamilton, he could see the mills and thought, "Those were where the great jobs were." At this point, he already had experience working in a science testing facility in Richmond Hill, Ontario.

While struggling to obtain work and making a name for himself, Carrey's father decided to help the young comedian put together a stage act, driving him to Toronto to debut at comedy club Yuk Yuk's. Unfortunately, Carrey's impersonations bombed and this gave him doubts about his capability as a professional entertainer. His family, at the time, were struggling financially meaning it was difficult for them to support Carrey's ambitions. Eventually, the family's financial problems were dealt with and they moved into a new home. With a now more domestic stability, Carrey worked up the nerve to return to the stage with a more polished act. In a short period of time, Carrey went from open mic nights to regular paid shows; a growing reputation building in the process. One reviewer in the Toronto Star raved that Carrey was "a genuine star coming to life". Carrey was soon noticed by comedian Rodney Dangerfield, who signed the young comedian to open Dangerfield's tour performances. Dangerfield eventually brought Carrey to Las Vegas, after which he decided to move to Hollywood. Carrey began performing at The Comedy Store and in 1982, appeared on the televised stand-up show An Evening at the Improv. The following year, he debuted his act on The Tonight Show.

Despite his increasing popularity as a stand-up comedian, Carrey turned his attention to the film and television industries, auditioning to be a cast member for the 1980–1981 season of NBC's Saturday Night Live. Carrey was not selected for the position (although he did host the show in May 1996, and again in January 2011). He was, after a period of time, cast in several low-budget films: Rubberface (1981) playing a struggling young comic, and Copper Mountain (1983) playing a sex-starved teen, the latter including his impersonation of Sammy Davis Jr. Since the film had a less than one hour runtime consisting largely of musical performances by Rita Coolidge and Ronnie Hawkins, it was not considered a full-length feature film.

In 1984, Carrey was suddenly cast as the lead in the NBC sitcom The Duck Factory, in which he played a quirky young artist alongside Jay Tarses. However, the show was unceremoniously cancelled during its first season. Despite the sudden cancellation, Carrey landed supporting roles in several low-budget films: Once Bitten (1985), Peggy Sue Got Married (1986), and The Dead Pool (1988). When Carrey returned to stand-up, he retired his old act vowing that he didn't want to be famous for imitating other people; "Some nights it was a melee, literally, where I'd be standing trying to defend myself for what I was doing. People would be screaming at me to do my old act, and getting actually violent and angry at me". While many thought he was "crazy" for retiring his old act, others were increasingly interested in what Carrey was attempting to do, Judd Apatow in particular. The pair struck up a friendship and soon began writing material together.

Carrey continued to land small roles in film and television productions, which led to a friendship with fellow comedian Damon Wayans, who co-starred with Carrey as an extraterrestrial in 1989's Earth Girls Are Easy. Damon soon introduced Carrey to his brother Keenen, who at the time, was creating a sketch comedy show known as In Living Color, for the new Fox network. Carrey eventually landed a recurring role in the show which first aired on April 15, 1990. By the third season, Carrey was one of the few remaining original cast members and was ready to move onto bigger things, after agreeing to take on his first lead role in a in a major Hollywood film..

Carrey did not experience true stardom until he was cast in the lead role of the slapstick comedy Ace Ventura: Pet Detective (1994), which premiered only months before In Living Color ended. Though he agreed to play the title character, Carrey was willing to take the role only if he was allowed to rewrite the script to suit his over-the-top visions. The film, while dismissed by most critics, was an international hit, and transformed Carrey into a bankable box-office star.

That same year, Carrey landed lead roles in The Mask and Dumb and Dumber. The Mask garnered him his first Golden Globe Award for Best Actor nomination, with Roger Ebert of the Chicago Sun-Times praising him for his "joyful performance". Well received by critics, Dumb and Dumber was a commercial success, grossing over $270 million worldwide, and again increasing Carrey's fanbase.

The following year he decided to take a pay cut to play the serious role of Truman Burbank in the satirical comedy-drama film The Truman Show (1998). The film was highly praised and brought Carrey further international acclaim, leading many to believe he would be nominated for an Oscar. Eventually, he did pick up his first Golden Globe Award for Best Actor in a Motion Picture Drama. The Truman Show was a commercial success also, earning $264 million worldwide against a budget of $60 million. A Film4 critic stated that the film "allows Carrey to edge away from broad comedy", adding that it was "a hilarious and breathtakingly conceived satire". That same year, Carrey appeared as a fictionalized version of himself on the final episode of Garry Shandling's The Larry Sanders Show, in which he deliberately ripped into Shandling's character. In 1999, Carrey had the lead role in Man on the Moon. He portrayed comedian Andy Kaufman to critical acclaim, with many believing that Carrey would finally be nominated for Best Actor. He received his second Golden Globe Award for the second consecutive year. Kenneth Turan of the Los Angeles Times wrote of Carrey's performance, "A brilliant, almost terrifying impersonation."

In 1983 Carrey dated Linda Rondstadt for 8 months. Carrey has been married twice. His first marriage was to former actress and Comedy Store waitress Melissa Womer, whom he married on March 28, 1987. Their daughter Jane Erin Carrey was born September 6, 1987. Jane was a 2012 contestant on American Idol. The two divorced in 1995. A year later Carrey married his Dumb and Dumber co-star Lauren Holly, on September 23, 1996; the marriage lasted less than a year. In the late 1990s and early 2000s, Carrey was involved in a series of relationships, including Laurie Holden, January Jones, and Anine Bing. In addition, Carrey had a much-publicized yet short-lived romance with his Me, Myself and Irene co-star Renée Zellweger, whom he dated, and at one point was engaged to from 1999 to 2000.

Carrey met model and actress Jenny McCarthy in 2005 and made their relationship public in June 2006. In April 2010, the two ended their near five-year relationship. Despite the split and media circulations, McCarthy stated in October 2010 that, "Jim and I are still good friends". 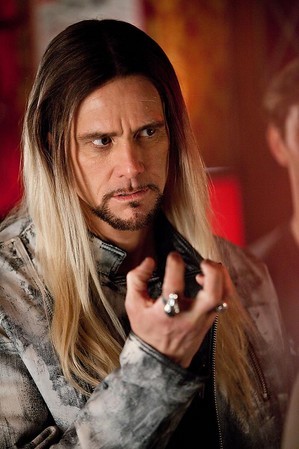 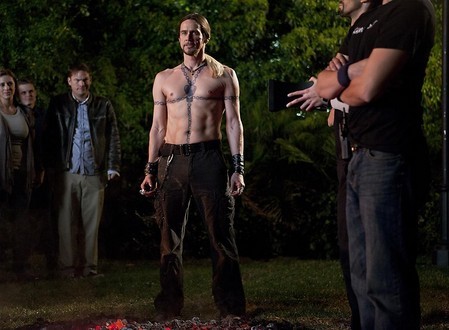 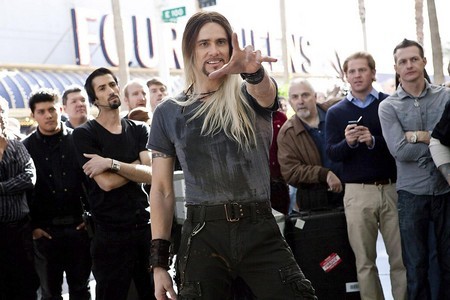 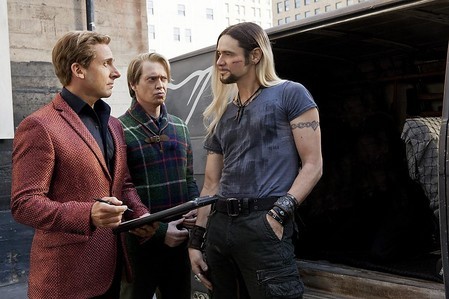