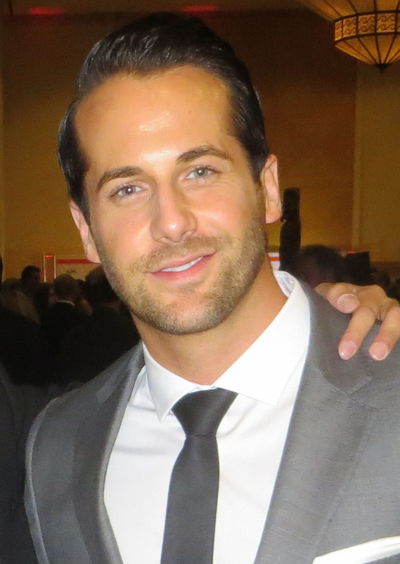 Following recovery from a serious accident sustained whilst working on Canadian oil rigs, Matter chose to pursue a full-time acting career. He received his first significant break in 2007, with a main role in teen drama The Best Years. Later in the same year, he joined the cast of Eureka as bad-boy genius Zane Donovan. In 2009 he had a small supporting role in Zack Snyder's film Watchmen. He went on to star as Evan Cross in the short-lived 2012 series Primeval: New World. His career subsequently moved away from science fiction, seeing him star in several television movies, as well as joining Canadian series such as Remedy, Arctic Air and When Calls the Heart.

Born in Edmonton, Alberta, of Irish and Russian descent, Matter grew up on his parents' dairy farm. He is a third-generation oil rigger, having worked on the oil rigs in Northern Alberta for eight years. On the recommendation of a school teacher, he enrolled in drama classes at age thirteen, going on to win the Best Actor prize at a provincial drama championship in 1999. However, after getting himself in trouble at age 17, his parents sent him for a three-month stint on the oil rigs to work with his grandfather. He has acknowledged that it was this experience that helped him to focus on his studies and pass his high school exams. He continued to work on the oil rigs alongside his grandfather and brother Trevor until the age of 25, while simultaneously moving to Vancouver and attending Vancouver Film School in pursuit of his long-term goal of an acting career.

At the age of 25 Matter had a serious accident while working on the oil rigs, where he was nearly crushed inside the cab of a 17-ton drilling rig. His quad muscle had been detached from his femur, and he nearly lost his right leg. It took six months for him to be fully rehabilitated, having to go through extensive physio therapy to fully regain his ability to walk. On returning to the oil rigs, he witnessed another accident in which a man lost both his legs. This convinced him that it was time to move on, so he quit, returning to Vancouver, where he lied his way into a bar tending job before landing his first acting role.

Matter landed his first professional acting job in 2007 playing the lead role of baitshop owner Josh Riley in the Syfy original film Loch Ness Terror, (broadcast as Beyond Loch Ness), which also starred Brian Krause and Don S Davis. While filming Loch Ness he sent an audition tape to the producers of The Best Years which lead to him gaining the main cast role of bar tender, and cocaine addict, Trent Hamilton in the series first season. He went on to play the role of USAF soldier Lieutenant Kemp in a two-episode guest spot on the Syfy television series Stargate Atlantis.

He subsequently auditioned for the Syfy series Eureka. for what he understood was a one-episode guest star role. By his own admission, Matter took risks in the audition, playing the character as more flirtatious than he was written. The risks paid off, and he was cast in the role of bad boy genius Zane Donovan, first appearing in the season two episode "E=MC...?". The character would go on to develop a romantic relationship with the town's Deputy Sheriff Jo Lupo played by Erica Cerra. His role was recurring throughout seasons two and three. Season four saw a soft reboot of the show - following a time traveling incident, the characters return to an alternate timeline, with character dynamics and relationships shifting. This led to Matter's role as Zane being expanded as he became part of the main cast, which continued through to the show's fifth and final season.

During this time, he also had guest roles on Warehouse 13, portraying one half of a married couple alongside Eureka castmate Cerra and on NBC's Fear Itself, playing a lovelorn zombie. In 2009/2010, Matter appeared as a recurring guest star on The CW shows Melrose Place (as record producer Rick) and 90210 as Greg, a teacher and subsequent love interest to Erin Silver.

In 2009, Matter played a small role in Zack Snyder's Watchmen film, portraying one of the Minute Men, Byron Lewis/Mothman. He also appeared in the short film accompanying the 'ultimate cut' DVD release of the film entitled Under the Hood, a faux documentary on the Minute Men.

From 2012 to 2013, Matter played the lead character of Evan Cross, a millionaire inventor searching for anomalies following the brutal killing of his wife by an Albertosaurus, in Space's science fiction series Primeval: New World, a spin-off of the British series Primeval. In 2013, this role earned him a Constellation Award in the Best Male Performance in a Science Fiction Television Episode category, for his performance in the episode "Truth". He was also nominated for a Leo Award in the Best Lead Performance by a Male in a Dramatic Series category, for the same episode. Due to low ratings, the series was not renewed for a second season.

In March 2014, Deadline Hollywood announced that he had landed the role of Lieutenant Graden Hales in the TNT commissioned pilot of Marcia Clark's Guilt by Association alongside Julia Stiles, which TNT ultimately declined to pick up.

He subsequently appeared in guest roles in various American and Canadian series. In CTV's Motive he played a man driven to murder in revenge for his sister's death; in the short-lived NBC series Constantine he played a father struggling to deal with the supernatural and in the TNT police procedural Rizzoli and Isles he portrayed a Detective turned murderer. He also had a recurring role in the third season of the CBC series Arctic Air as Tag Cummins, the love interest of the series female protagonist, Krista Ivarson, portrayed by Pascale Hutton. Additionally, Matter appeared in the 'VIP Lounge' online content produced to accompany the show, which was available through the series page on the CBC website.

Matter appeared in the 2014 Calgary International Film Festival's closing gala film, dark-comedy/thriller Ally Was Screaming. He was nominated for a 2015 AMPIA Rosie Award, for his role as Andrew, the abusive estranged husband of the titular Ally. In November 2014 he was announced as one of the Whistler Film Festival's Rising Stars, a program designed to promote the next generation of Western Canadian actors poised for international careers. He also attended the festival's screening of Ally Was Screaming, alongside his castmates.

In 2016, he guest starred in two episodes of Bravo's Girlfriends' Guide to Divorce as seedy artist Joaquin. In the same year, he starred as surgeon Dr Clay Castleberry in the Hallmark Channel original movie Stop the Wedding, which was adapted from the novel of the same name by Stephanie Bond. The film's director Anne Wheeler went on to win Best Direction (Television Movie) at the 2017 Leo Awards. He subsequently starred in the W Network film A Snow Capped Christmas, (broadcast as Falling for Christmas in the US on Up), as former ice-hockey player and single father, Luke.

2016 also saw Matter star alongside Erin Krakow in the Hallmark Movies & Mysteries film Finding Father Christmas, based on the novel by Robin Jones Gunn, as local lawyer/hotellier Ian McAndrick. At the time of broadcast, the film became the most watched premier in the network's history. Matter and Krakow reprised their roles in a sequel to the film, entitled Engaging Father Christmas (broadcast as A Family for the Holidays in Canada and as Winter Wedding in the UK) which premiered on Hallmark Movies & Mysteries in November 2017.

He appeared in the 2016 Canadian wrestling-comedy film Chokeslam as Tab Hennessy, wrestling manager and boyfriend to the film's protagonist, Sheena 'Smasheena' DeWilde, portrayed by Amanda Crew. Matter attended the film's premiere at the Calgary International Film Festival on October 2, 2016 alongside his castmates. The film won four awards at the 2017 AMPIA Rosie Awards, including Best Director for Robert Cuffley.

Matter attended the 2nd annual "Hearties Family Reunion" in December 2016, where it was confirmed he would join the cast of the Hallmark Channel series When Calls the Heart for its fourth season, which began airing in January 2017. First appearing in the episode "The Heart of the Community", he portrayed Shane Cantrell, a single father struggling to connect with his son, who later begins a tentative relationship with Faith Carter (Andrea Brooks).

2017 saw Matter make guest appearances in two CW dramas. In May he appeared in the season three episode of iZombie, "Some Like it Hot Mess", playing the role of nightclub owner Sage Denning. The episode was directed by his Remedy castmate Enrico Colantoni. In November he made an appearance on the channel's long-running series Supernatural, in an episode of the show's thirteenth season, entitled "The Big Empty", playing the character of sadistic shape-shifter, Buddy.

In October of the same year, Matter appeared in an episode of the first season of ABC medical drama The Good Doctor. Based on the South Korean series of the same name, the drama follows the life of autistic-savant surgeon Shaun Murphy (Freddie Highmore). Matter appeared in the episode "Pipes", playing the role of Mark Allen, an expectant father facing life and death decisions over surgery on his unborn child.

In late 2017, Matter filmed the role of ice-hockey player Adam in the Hallmark Channel television film Frozen in Love, which was broadcast in January 2018, as a part of the channel's annual 'Winterfest' programming. The film was developed from an original idea by Matter's co-star, actress Rachael Leigh Cook. Filming took place in British Columbia in November and December 2017.

2018 saw Matter star in the Hallmark Channel original movie Love at First Dance as former 'Most Eligible Bachelor' Eric alongside dance instructor Hope,(Becca Tobin), which was broadcast as part of the channel's annual 'June Weddings' event. In July, he featured as college professor Nick Miller in the Hallmark Movies & Mysteries franchise the Aurora Teagarden Mysteries, which star Candace Cameron Bure, in an installment entitled The Disappearing Game. He is set to reprise this role in two further films in the series, to be broadcast in 2019.

In July of the same year, he appeared in an episode of the first season of ABC series Take Two, guest starring along with Seamus Dever. The pair played brothers in the episode entitled "Death Becomes Him".

Matter will also reprise the role of Ian McAndrick in a third film in the Hallmark Movies & Mysteries 'Father Christmas' series, entitled Marrying Father Christmas. The film began production in March 2018 in Vancouver, British Columbia, again costarring Erin Krakow and directed by David Winning. It will premiere in the USA on the Hallmark Movies & Mysteries channel on November 4, 2018, as part of their "Miracles of Christmas" seasonal programming.

Matter has previously dated Graceland star Serinda Swan, with whom he remains friends.

In July 2016, he married his girlfriend Sara in a private ceremony in Hawaii. The couple have two children, with their first child born in 2016 and their second in 2018.

He is a longtime fan of the NHL team Edmonton Oilers.