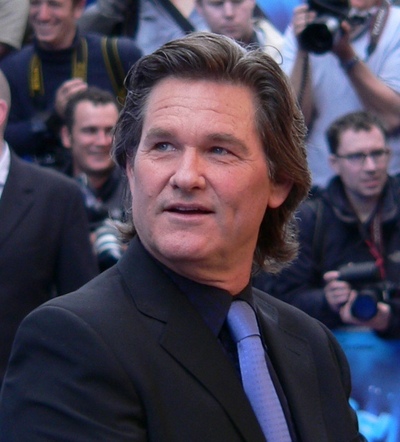 Kurt Vogel Russell (born March 17, 1951) is an American television and film actor. His first acting roles were as a child in television series, including a lead role in the Western series The Travels of Jaimie McPheeters (1963–64). In the 1970s, he signed a ten-year contract with the Walt Disney Company, where he became, according to Robert Osborne, the "studio's top star of the '70s". In 1979, Russell was nominated for an Emmy Award for the made-for-television film Elvis.

In 1983, he was nominated for a Golden Globe Award for Best Performance by an Actor in a Supporting Role in a Motion Picture for his performance opposite Meryl Streep in the 1984 film, Silkwood. During the 1980s, Russell was cast in several films by director John Carpenter, including anti-hero roles such as former army hero-turned robber Snake Plissken in the futuristic action film Escape from New York and its sequel, Escape from L.A., Antarctic helicopter pilot R.J. MacReady in the horror film The Thing (1982), and truck driver Jack Burton in the dark kung-fu comedy/action film Big Trouble in Little China (1986), all of which have since become cult films.

In 1994, Russell had a starring role in the military science fiction film Stargate. In the mid-2000s, his portrayal of U.S. Olympic hockey coach Herb Brooks in Miracle (2004) won the praise of critics. In 2006, he appeared in the disaster-thriller Poseidon, and in 2007 Quentin Tarantino's Death Proof segment from the film Grindhouse.

Russell began his career in the late 1950s with an appearance as a child in the pilot of the ABC western television series Sugarfoot with Will Hutchins. His film career began at the age of eleven in an uncredited part in Elvis Presley's It Happened at the World's Fair and two extra episodes, celebrating the tenth anniversary of the then defunct series Rin Tin Tin. On April 24, 1963, Russell guest starred in the ABC series Our Man Higgins, starring Stanley Holloway as an English butler in an American family. He appeared in 1963 as Peter Hall in the episode "Everybody Knows You Left Me" on the NBC medical drama about psychiatry The Eleventh Hour.

Later in 1963, he landed the lead role as Jaimie in the ABC Western series The Travels of Jaimie McPheeters (1963–1964). Based on a book by Robert Lewis Taylor, the series starred Dan O'Herlihy, John Maloney, and the young Osmond Brothers. Charles Bronson became a semi-regular in the series.

Over the 1980s, Russell would team with Carpenter several times, helping create some of his best-known roles, usually as anti-heroes, including the infamous Snake Plissken of Escape from New York and its sequel, Escape from L.A.. Among their collaborations was 1982's The Thing, based upon the short story Who Goes There? by John W. Campbell, Jr., which had been interpreted on film before, albeit loosely, in 1951's The Thing from Another World. In 1986, the two made Big Trouble in Little China, a dark kung-fu comedy/action film in which Russell played a truck driver caught in an ancient Chinese war. While the film was a financial failure like The Thing, it has since gained a cult audience. During this period, he also voiced an adult Copper in the animated Disney film The Fox and the Hound. Russell is one of the very few famous child stars in Hollywood who has been able to continue his acting career past his teen years. Russell received award nominations well into middle age. He was nominated for a Golden Globe Award for Best Performance by an Actor in a Supporting Role in a Motion Picture for his performance opposite Meryl Streep in the 1984 film, Silkwood.

Russell married actress Season Hubley, whom he had met on the set of Elvis in 1979; they had a son, Boston Russell, in 1980. In 1983, in the middle of his divorce from Hubley, Russell re-connected with Goldie Hawn on the set of the film Swing Shift, and they have been in a relationship ever since. They had a son, Wyatt, in 1986. One year later, in 1987, the couple starred in the film Overboard. Hawn's son and daughter with Bill Hudson, actors Oliver and Kate Hudson, consider Russell to be their father.