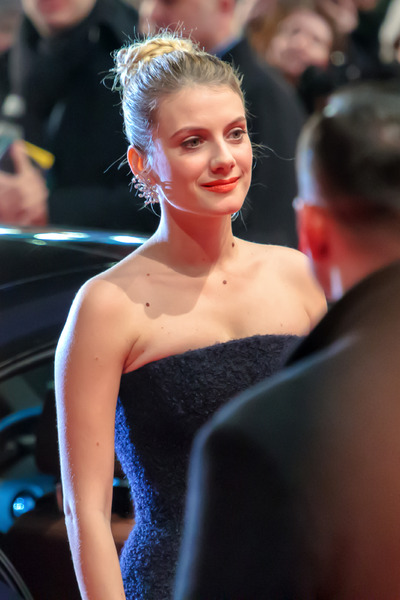 Mélanie Laurent (born 21 February 1983) is a French actress, director, singer, and writer. She is best known to international audiences for her role as Shosanna Dreyfus in Quentin Tarantino's 2009 film Inglourious Basterds, for which she won Best Actress from the Online Film Critics Society and the Austin Film Critics Association.

Laurent was born in Paris, the daughter of Annick, a ballerina, and Pierre Laurent, a voiceover actor (who dubs the character Ned Flanders in the French version of The Simpsons). Mélanie is Jewish, and has both Ashkenazi and Tunisian Sephardic ancestry. A grandfather survived deportation by the Nazis. Her maternal grandparents were film poster editors. She grew up in the 9th arrondissement of Paris, and was immersed from birth in the arts.

Her career began when Gérard Depardieu, seeing her while she watched her best friend's father working on the set of Asterix and Obelix, asked her if she wanted to be in movies. Laurent replied 'Why not?' and next week his assistant called her. Depardieu gave Laurent a part when she was 16 in The Bridge, a drama he starred in and co-directed with Fréderic Auburtin.

Laurent has appeared in 20 films between 1999 and 2009. Playing a depressed 19 year-old who longed for her lost twin brother, she starred in Philippe Lioret's I'm Fine, Don't Worry (2006), for which she won a César Award for Most Promising Actress. In 2006, Laurent and Belgian actorJérémie Renier were awarded France's Romy Schneider and Jean Gabin Prizes for "most promising actor and actress."

Laurent was in a long-term relationship with fellow French actor Julien Boisselier. She describes recording artist Damien Rice and filmographer Quentin Tarantino as two "masters" in terms of their art. With Rice, she recorded her first album, living between Woodstock, New York and his home in Ireland. Spending time in his home in Ireland inspired her to maintain a compost heap and eat organic food.