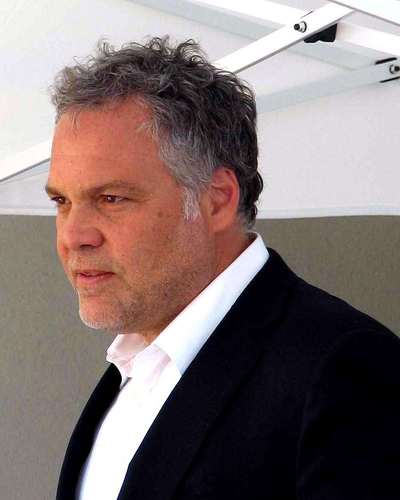 Vincent Philip D'Onofrio (born June 30, 1959) is an American actor, director, film producer, writer, and singer. Often referred to as an actor's actor, his work as a character actor has earned him the nickname "The Human Chameleon". He is known for his roles as Private Leonard Lawrence ("Gomer Pyle") in the war film Full Metal Jacket, "Edgar" in Men in Black and Detective Robert Goren in the crime TV series Law & Order: Criminal Intent.

Vincent D'Onofrio was born in the Bensonhurst neighborhood of Brooklyn, New York, of Italian descent. He is the son of Gennaro (Gene) D'Onofrio, an interior designer and theater production assistant, and Phyllis, a waitress and restaurant manager. The couple met while Gene was stationed in Hawaii with the U.S Air Force. In 1956, they had their first child, Antoinette, who now owns the Rib City restaurant in American Fork, Utah. She was followed by Elizabeth (1957), an actress and drama coach now residing in Fort Myers Beach, Florida, then by D'Onofrio's

D'Onofrio's parents divorced when he was young, and his mother later married George Meyer who had a son, Guy, and daughter, Connie, from a previous marriage. The family moved to the Hialeah area of Florida. A shy boy who spent "a lot of time in my room, staying in my head", D'Onofrio later became interested in magic and sleight of hand, tricks he learned from Cuban entertainers who owned a small magic shop. In his teens, he worked backstage, building sets and running sound at a number of community theaters run by his father.

After graduating from Hialeah-Miami Lakes Senior High School, D'Onofrio started to appear in front of the curtain. During an 18-month stint at the University of Colorado in Boulder, he was involved with small community theater productions. He later studied method acting at the American Stanislavsky Theater and the Actors Studio under coaches Sonia Moore and Sharon Chatten which landed him his first paid role in Off-Broadway's This Property Is Condemned. He went on to appear in a number their productions, including Of Mice and Men and Sexual Perversity in Chicago. D'Onofrio continued his career by performing in many New York University student productions while also working as a bouncer at the Hard Rock Cafe, a bodyguard for Robert Plant and Yul Brynner and a deliveryman. In 1984, he made his Broadway debut as Nick Rizzoli in Open Admissions. In 2012, D'Onofrio returned to teach at the Lee Strasberg Theater & Film Institute where his daughter, Leila George, is a student.

In 1986, D'Onofrio took on the role often considered the defining moment in his acting career, as Pvt. Leonard Lawrence, an overweight and mentally unstable Marine recruit in the movie Full Metal Jacket. On a tip from friend Matthew Modine, D'Onofrio was urged to send audition tapes to director Stanley Kubrick, in England. Four tapes later D'Onofrio landed the role. Originally, the character of Pvt. Lawrence had been written as a 'skinny ignorant redneck', however, Kubrick believed the role would have more impact if the character was big and clumsy. D'Onofrio gained 70 lb (32 kg) for the role, bringing his weight to 280 lb (130 kg). This remains the record for most weight gained by an actor for a movie, surpassing Robert De Niro's accumulation of 60 lb (27 kg) for the filming of Raging Bull. While filming an obstacle course scene for the movie, D'Onofrio injured his left knee, compounded by the excessive weight, which required surgical reconstruction.

In the early '90s, D'Onofrio was in a relationship with the actress Greta Scacchi with whom he made several movies in the late 1980s and early 1990s (including The Player and Fires Within). The couple have one daughter (Leila George) born March 20, 1992 in Sydney, Australia.

During an interview in January 2012, D'Onofrio discussed his frustration with conflicting reports on his current marital status, including inaccuracies on IMDB. He has stated that, despite some reports, he is currently married. He and his family reside in a Gramercy townhouse in Manhattan.