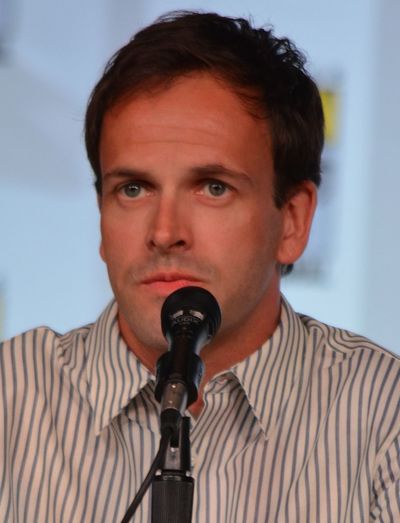 Jonathan "Jonny" Lee Miller (born 15 November 1972) is an English film, television and theatre actor. He achieved early success for his portrayal of Simon "Sick Boy" Williamson in the dark comedy drama film Trainspotting (1996) and as Dade Murphy in Hackers (1995), before earning further critical recognition for his performances in Afterglow (1997), Mansfield Park (1999), The Flying Scotsman (2006) and Endgame (2009); for The Flying Scotsman he received a London Film Critics' Circle nomination for Actor of the Year. He was also part of the principal cast in the films Melinda and Melinda (2004), Dark Shadows (2012) and Byzantium (2013). He has appeared in several theatrical productions on Broadway, most notably After Miss Julie and Frankenstein, the latter of which earned him an Olivier Award for Best Actor.

Miller starred as the title character in the ABC comedy-drama Eli Stone for which he received a Satellite Award nomination for Best Actor. This was followed by another starring role in the BBC costume drama Emma and a supporting role as Jordan Chase in the fifth season of the Showtime drama Dexter. He currently stars as Sherlock Holmes in the CBS crime drama Elementary which earned him his second Satellite Award nomination for Best Actor.

Miller was born on 15 November 1972 at Kingston upon Thames, Surrey, and was raised in the south west of London. He is the son of Anna Lee and Alan Miller, and was influenced by his parents to start acting; they were both theatre actors and were involved in stage productions at the BBC. His grandfather was actor Bernard Lee, who played M in the first eleven James Bond films. Miller has said he remembers little of him as he was still young when his grandfather died.

Miller attended Tiffin School as a child. He appeared in several school plays such as The Ragged Child and performed as part of the Tiffin Swing Band. He then joined the National Youth Music Theatre where he met fellow actor Jude Law. He left school at the age of sixteen after taking his GCSEs to pursue a career in acting.

Jonny made his television debut with an uncredited appearance in the BBC series Doctor Who at the age of nine in the 1982 episode Kinda. The following year he appeared in Jemima Shore and had a role as Charles Price in the serial drama Mansfield Park. He then appeared in various television shows throughout the 1990s. These included two separate guest roles in the ITV procedural The Bill as well as single episode roles in the BBC drama Between the Lines and the medical drama Casualty. He also featured in Keeping Up Appearances, Inspector Morse and Minder. His first notable acting role came in the soap opera EastEnders where he played Jonathan Hewitt. Miller later revealed he had been offered a contract to remain on the show but declined: "It was five weeks' work and I made more money there than I ever had in my life. Then they offered me a year's contract. I said no, thank God. I thought I should get out of there while I still could."

In 2003, Miller appeared in the BBC modernisation of The Canterbury Tales in the episode The Pardoner's Tale, and had a starring role as Lord Byron in the television film Byron. He then starred alongside Ray Liotta in the CBS drama Smith. However, the show was canceled after only seven episodes. Miller was then cast as the titular character in the legal comedy-drama Eli Stone. The show ran for two seasons on ABC and he received a Satellite Award nomination for Best Actor. He then starred in the BBC costume drama Emma as George Knightley. He then had a guest role as Jordan Chase in the fifth season of the Showtime drama Dexter for which he received a nomination for Screen Actors Guild Award for being part of the main cast in the category of Outstanding Performance by an Ensemble in a Drama Series. In early 2010, it was reported he was set to portray Rick Grimes in the television adaptation of the comic The Walking Dead. It was later revealed Andrew Lincoln had been cast. In 2011, Miller auditioned for the role of Sherlock Holmes in the CBS adaption based on the works of Arthur Conan Doyle. He originally turned down the part as he feared it would be too similar to the BBC version Sherlock. However, after receiving the script he accepted the part and it was officially announced he would star in Elementary alongside Lucy Liu. This earned him his second Satellite Award nomination for Best Actor.

He first starred in the film Hackers (1995), with Angelina Jolie, whom he married in 1996. Shortly after Hackers, Miller was cast as Sick Boy in Trainspotting. He was suggested for the role by Ewan McGregor. The accent he used in the film was so convincing that it led many people to incorrectly believe that he was Scottish. Miller has stated: "I had to do a lot of work. I read and re-read the book and I pretended to be Scottish all the time I was in Glasgow, hanging around with Scots, picking up bits and pieces on the street and in bars. Everyone's been very encouraging and Danny thinks that I've got it about right. Of course, the others are from all over Scotland and have different accents themselves, so I've tried to just pick up a general, composite accent."

In 1997, he played Billy Prior in the film adaptation of Pat Barker's World War I novel Regeneration. In 2000, he played Cameron Colley in Complicity, based on the book by Iain Banks. He costarred in the film Love, Honour and Obey as Johnny, a London street kid getting mixed up with a notorious British gangster. Also in 2000, he appeared as Simon Sheppard in Wes Craven's Dracula 2000. In 2005, he was considered for the role of James Bond, replacing Pierce Brosnan. The role eventually went to Daniel Craig. The following year, Miller portrayed cyclist Graeme Obree in The Flying Scotsman.

He was considered as the third teammate to join Ben Fogle and James Cracknell in Team QinetiQ for the Amundsen Omega 3 South Pole Race in January 2009. He participated in training for the event in Norway, which was televised for a BBC2 documentary series On Thin Ice. He was not able to attend the race due to filming commitments of Eli Stone being extended for a second season. In 1997, he was involved with the creation and operation of the production company Natural Nylon with friends Jude Law, Sadie Frost, Ewan McGregor, and Sean Pertwee. Natural Nylon folded in 2003.

Miller married actress Angelina Jolie on 28 March 1996. They separated 18 months later and were divorced on 9 February 1999. He began dating actress and model Michele Hicks in 2006. They married in July 2008 in Malibu, California. The couple have one son, Buster Timothy Miller, born in December 2008.

He is a marathon runner, often supporting the charity Mencap. Miller was signed up to run the 2006 Marathon des Sables, but he had to drop out due to shooting the film Marathon. He ran the 2008 London Marathon in 3:01:40. In 2014, Miller became an advocate to finding treatment for the disease Sanfilippo syndrome, following a case with five-year-old Jonah Weishaar. He is set to address the Congressional caucus in Washington, D.C., on behalf of rare disease organizations, in the hopes of securing financing to fund treatment research.