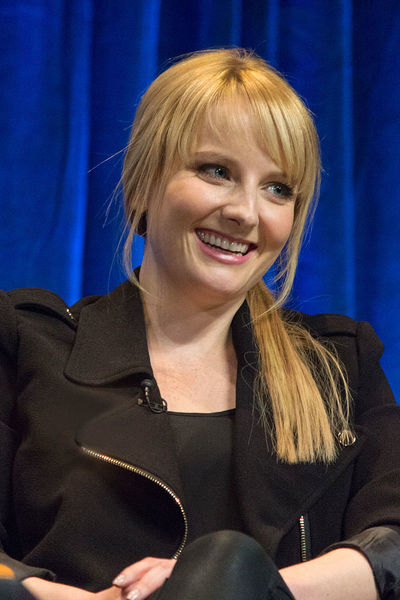 Melissa Ivy Rauch (born June 23, 1980) is an American actress and comedian. She is best known for her role as Dr. Bernadette Rostenkowski-Wolowitz on the CBS sitcom The Big Bang Theory.

Rauch was born in Marlboro Township, New Jersey, to Susan and David Rauch. She and her brother, Ben, were raised in a Jewish household.

She attended Frank Defino Central Elementary School in Marlboro. She developed an interest in acting while attending Marlboro High School.

Rauch attended Marymount Manhattan College in New York City, where she received a BFA degree. While going to school, Melissa performed stand-up comedy around Manhattan, and soon made a name for herself on the NYC comedy scene. Her one-woman show, "The Miss Education of Jenna Bush", in which she portrayed Jenna Bush, the former President's daughter, garnered critical acclaim and played to sold-out audiences (Outstanding Solo Show and TheaterMania's Audience Favorite Award—New York International Fringe Festival/HBO's US Comedy Arts Festival).

Some of Rauch's early work was as a regular contributor to VH1's Best Week Ever television show.

In 2009, Rauch began playing the recurring role of Bernadette Rostenkowski, a co-worker of Penny who began to date Howard Wolowitz, in the third season of TV's The Big Bang Theory. The following season her character became Howard's fiancée and Rauch was promoted to a series regular. The characters married in the season five finale. In December 2011, Rauch and fellow cast members of The Big Bang Theory received the first of four nominations for the Screen Actors Guild Award for Outstanding Performance by an Ensemble in a Comedy Series.

Other acting credits include True Blood (on which she had a recurring role in 2010 as Summer, a girl who likes Hoyt), The Office, the American remake of the Australian TV series Kath & Kim, Wright v Wrong, and the film I Love You, Man.

Rauch is also part of the cast of the comedic stage show The Realest Real Housewives with Casey Wilson, June Diane Raphael, Jessica St. Clair and Danielle Schneider. The show began running at the Upright Citizens Brigade Theater in 2011.

Melissa co-wrote and co-produced the film "The Bronze," in which she plays the lead character of Hope Annabelle Greggory, a Bronze medal winning gymnast who is still living in the glory of her triumphant moment in sports history twelve years after the fact. "The Bronze" had the honor of opening the Sundance Film Festival in 2015. Rauch was named one of the "Breakout Stars" of the festival for her critically acclaimed performance in the film. Variety said, "Rauch, who co-wrote the screenplay with her husband Winston, has never carried a film before. But she delivers the best breakthrough comedic performance by an actress since Melissa McCarthy in “Bridesmaids."  Sony Pictures Classics released the film in March of 2016.

Rauch is married to writer Winston Rauch (né Beigel), who collaborated with her on The Miss Education of Jenna Bush and other projects. Rauch modeled the voices of Bernadette after her parents: the "sweet, high-pitched purr" is modeled after her mother, while the "eerie, haranguing imitation" of Mrs. Wolowitz is modeled after her father. Both are "very different" from Rauch's real voice.