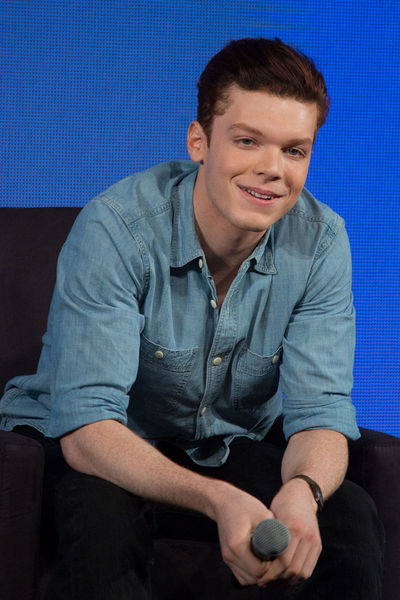 Cameron Riley Monaghan (born August 16, 1993) is an American actor and model. Beginning with his professional career as a child model at the age of three, and child actor at the age of seven, Monaghan is best known for his role as Ian Gallagher on the Showtime comedy-drama (dramedy) series Shameless. He has also appeared as Kevin O'Doyle in Click (2006), Chad in the Fox comedy series Malcolm in the Middle, Corey Doyle in Prom (2011), Mason Ashford in Vampire Academy (2014), Asher in The Giver (2014), and as Jerome Valeska in the Fox crime series Gotham.

Monaghan was born in Santa Monica, California, the only child of Diane Monaghan, an insurance claims specialist and single mother. He and his mother relocated to Boca Raton, Florida shortly after his birth. Recognizing that Monaghan was an exceptionally outgoing child, his mother sent his picture to modeling agencies when he was three. He appeared on the cover of his first catalogue at the age of five and appeared in his first regional commercial at the age of seven.

He attended Addison Mizner Elementary School and began to develop his acting skills by appearing in the Little Palm Children's Theatre's productions of Stuart Little, Winnie-the-Pooh, and The Pumpkin King (a theatrical adaptation of The Nightmare Before Christmas), as well as appearing as Alex in the small independent film The Wishing Stone, which was filmed in the Lake Worth, Florida area.

Monaghan first came to national attention in 2003 for his role as Winthrop Paroo opposite Kristin Chenoweth and Matthew Broderick in the ABC television adaptation of The Music Man. When recounting the decision to cast the 9-year-old Monaghan, director and executive-producer Jeff Bleckner explained, "There are some people, when you put them up on film, they sort of pop off the screen at you. That's how it was with Cameron. From the second we saw him, he was it. We were looking for anybody who had that wonderful appeal. And Cameron had it."

In 2004, Monaghan began a recurring role as Chad, one of Dewey's special needs classmates on the Fox comedy series Malcolm in the Middle, which earned him the Young Artist Award as Best Young Television Actor in a Recurring Role. The following year, he began a recurring role as Palmer Noid on the Nickelodeon situation comedy Ned's Declassified School Survival Guide. Subsequent guest-starring television roles followed, including appearances on Criminal Minds, Numb3rs, The Mentalist, Monk, Three Rivers, Fringe, The Glades, and Terriers.

In 2005, Monaghan transitioned to theatrical film roles, appearing as Timmy in the independent western Brothers in Arms. The following year, he appeared as Kevin O'Doyle, the bothersome next-door neighbor to Adam Sandler in the fantasy comedy Click. A series of subsequent feature film roles followed, including appearances in The Santa Clause 3: The Escape Clause, Dog Gone, Safe Harbor and Another Harvest Moon, as well as portraying the boy detective Bob Andrews in the Three Investigators film series.

In April 2010, Monaghan was cast as an ensemble cast member on the Showtime comedy-drama series Shameless. On the series, which premiered in January 2011, Monaghan portrays Ian Gallagher, the gay teenage son of a large dysfunctional Chicago family. Sarah Hughes of The Independent commended Monaghan's portrayal for providing "one of the more nuanced depictions of a gay teenager to be seen on US TV." Matthew Gilbert of The Boston Globe described Monaghan's performance as "extraordinary." And the gay-interest media outlet AfterElton.com cited Monaghan's portrayal of Ian in naming him to its list of "2011's Break-Out TV Actors". In February 2014, Showtime announced it had renewed the series for a fifth season, scheduled to begin airing in 2015. The seventh season began airing in October 2016. The eighth season of 12-episodes will go into production in May 2017.

In addition to his role on Shameless, Monaghan has continued to appear in a variety of episodic television roles. In 2011, he guest-starred as Nick Peyton, a teenage boy accused of murdering his Marine father, on the CBS crime series NCIS. That same year he appeared as Jonathan McKenna on the TNT mystery series Rizzoli & Isles. In 2012, he guest-starred as Eddie Sandow, a 19-year-old who creates a hostage situation after his father is accused of sexual assault, on the NBC crime series Law & Order: Special Victims Unit.

In addition to his television credits, Monaghan has continued to appear in a variety of feature film roles. In 2011, he co-starred as high school sophomore Corey Doyle in the Disney teen drama Prom. In 2012, he portrayed Jake, the son of an attractive YMCA director in the sports themed comedy 2nd Serve. In 2014, Monaghan starred as Adam McCormick, a small-town high school athlete who becomes consumed by the death of one of his classmates in the independent drama Jamie Marks Is Dead. That same year, he appeared as Mason Ashford, the best friend and romantic interest to Rose in the fantasy adventure film Vampire Academy. He also starred as Asher in the dystopian movie The Giver, alongside Brenton Thwaites, Odeya Rush, Jeff Bridges and Meryl Streep. In 2015, he appeared in Gotham as Jerome Valeska. When asked by a fan on Twitter, Monaghan showed a picture of a Maximum Carnage toy and stated it "definitely would be a dream come true" if he were to be in the role of Cletus Kassidy / Carnage in the upcoming film Venom (with Tom Hardy as the titular character).

As of 2014, Monaghan lives in the Los Angeles area where he has resided since he was approximately 10 years old. When questioned about his childhood roots in southern Florida, Monaghan explained, "Most of my family doesn’t live there anymore [...] I have a couple of relatives that live in northern Florida. My hometown is much more south, so there's no real reason to be going back there anymore."

He has expressed an interest in music and plays guitar, drums, harmonica, and ukulele, and taught himself to play keyboard. His athletic interests include boxing, bicycling, running, snowboarding and skiing. He is a former student of kickboxing, Taekwondo, and XMA (Extreme Martial Arts).

When questioned about his sexual orientation, Monaghan has said he is straight. In February 2013, responding to inquiries regarding his sexuality on Twitter, Monaghan tweeted, "This is the only time I will answer this here: No, I'm not gay. Yes, I play a gay character. No, the question should not be relevant." Adding, "Thanks for the kind words, everyone. It feels a bit odd to 'come out' as a straight guy."