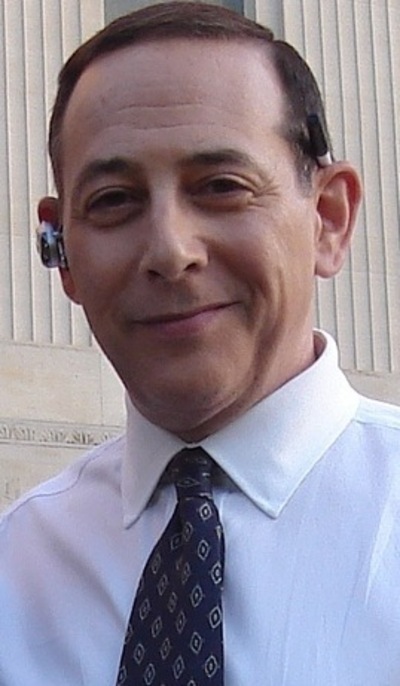 Paul Reubens (born Paul Rubenfeld; August 27, 1952) is an American actor, writer, film producer, game show host, and comedian, best known for his character Pee-wee Herman. Reubens joined the Los Angeles troupe The Groundlings in the 1970s and started his career as an improvisational comedian and stage actor. In 1982, Reubens put up a show about a character he had been developing during the last few years. The show was called The Pee-wee Herman Show and it ran for five sold-out months with HBO producing a successful special about it. Pee-wee became an instant cult figure and for the next decade Reubens would be completely committed to his character, doing all of his public appearances and interviews as Pee-wee. In 1985 Pee-wee's Big Adventure, directed by the then-unknown Tim Burton, was a financial success and, despite receiving mixed reviews, it developed into a cult film. Big Top Pee-wee, 1988's sequel, was less successful than its predecessor. Between 1986 and 1990, Reubens starred as Pee-wee in the CBS Saturday-morning children's program Pee-wee's Playhouse.

In July 1991, after deciding to take a few years' sabbatical from Pee-wee, Reubens was arrested for indecent exposure in an adult theater in Sarasota, Florida. The arrest set off a chain reaction of national media attention that changed the general public's view of Reubens and Pee-wee. The arrest postponed Reubens' involvement in big projects until 1999, when he appeared in the big-budget projects Mystery Men and Blow and started giving interviews as himself rather than as Pee-wee.

Since 2006, Reubens has been making cameos and guest appearances in numerous projects, such as Reno 911!, 30 Rock, Dirt, and Pushing Daisies. Since the 1990s, he has worked on two possible Pee-wee films — one dark and adult, dubbed The Pee-wee Herman Story, and one a family-friendly epic adventure called Pee-wee's Playhouse: The Movie. In 2010, he starred on Broadway in The Pee-wee Herman Show.

Reubens was born Paul Rubenfeld in Peekskill, New York, and grew up in Sarasota, Florida, where his parents, Judy and Milton, owned a lamp store. His mother, Judy, was a teacher and his father, Milton, an automobile salesperson who had flown for Britain's Royal Air Force and for the U.S. Army Air Forces in World War II, later becoming one of the founding pilots of the Israeli Air Force during the 1948 Arab-Israeli War. Paul has two younger siblings, Luke (born 1958), who is a dog trainer, and Abby (born 1953), who is an attorney, and board member of the American Civil Liberties Union of Tennessee.

Reubens spent a significant amount of his childhood in Oneonta, New York. As a child, Reubens frequented the Ringling Bros. and Barnum & Bailey Circus, whose winter headquarters was in Sarasota. The circus's atmosphere sparked Reubens' interest in entertainment and influenced his later work. Reubens also loved to watch reruns of I Love Lucy, which made him want to make people laugh. At age five, Reubens asked his father to build him a stage, where he and his siblings would put on plays.

Reubens attended Sarasota High School, where he was named president of the National Thespian Society. He was accepted into Northwestern University's summer program for gifted high-school students and also joined the local Asolo Theater and Players of Sarasota Theater, appearing in several plays. After graduation, he attended Boston University and began auditioning for acting schools. He was turned down by several schools, including Juilliard, and twice by Carnegie-Mellon, before being accepted at the California Institute of the Arts and moving to California, where he worked in restaurant kitchens and as a Fuller Brush salesman.

In the 1970s, Reubens performed at local comedy clubs and made four guest appearances on The Gong Show as part of a boy–girl act he had developed with Charlotte McGinnis, called The Hilarious Betty and Eddie. He soon joined the Los Angeles–based improvisational comedy team The Groundlings and remained a member for six years, working with Bob McClurg, John Paragon, Susan Barnes, and Phil Hartman. Hartman and Reubens became friends, often writing and working on material together. In 1980, he had a small part as a waiter in The Blues Brothers.

The character of "Pee-wee Herman" first originated during a 1978 improvisation exercise with The Groundlings, where Reubens came up with the idea of a man who wanted to be a comic, but was so inept at telling jokes that it was obvious to the audience that he would never make it. Fellow Groundling Phil Hartman would afterwards help Reubens develop the character while another Groundling, John Paragon, would help write the show. Despite having been compared to other famous characters, such as Hergé's Tintin and Collodi's Pinocchio, Reubens says that there is no specific source for "Pee-wee" but rather a collection of ideas. Pee-wee's voice originated in 1970 when Reubens appeared in a production of Life with Father, where he was cast as one of the most obnoxious characters in the play, for which Reubens adopted a cartoon-like way of speaking that would become Pee-wee's. Pee-wee's name is a mixture of a one-inch Pee Wee brand harmonica Reubens had as a child while Herman was the surname of an energetic boy Reubens knew from his youth. The first small grey suit Pee-wee ever wore had been handmade for director and founder of the Groundlings Gary Austin, who passed it on to Reubens, while "someone" handed him the "little kid bow tie" before a show.

Reubens dated actress Debi Mazar in 1993 after he started attending film premieres with her. From 1994 until 1999 Reubens was rumored to be engaged to Mazar. Reubens has since credited Mazar with ending his depression from his arrest.