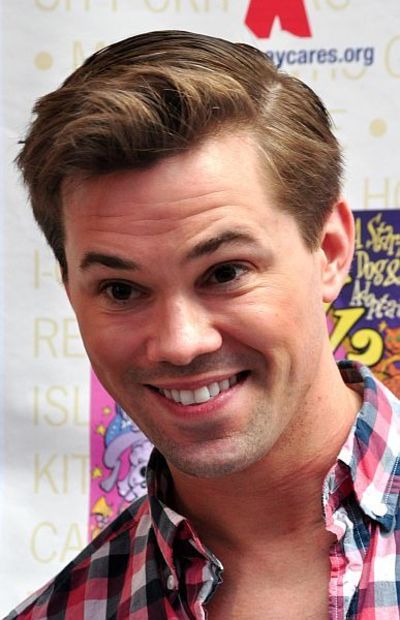 Andrew Scott Rannells (born August 23, 1978) is an American actor, voice actor, and singer. He is perhaps best known for his work as Elder Price in the 2011 Broadway musical The Book of Mormon, which earned him a nomination for the Tony Award for Best Performance by a Leading Actor in a Musical. As a featured soloist on the musical's Original Broadway Cast Recording, he won the Grammy Award for Best Musical Theater Album. His other Broadway credits include Jersey Boys, Hairspray, and Hedwig and the Angry Inch. He portrayed King George III in Lin-Manuel Miranda's musical Hamilton, temporarily replacing Jonathan Groff in the role on Broadway.

Rannells was born in Omaha, Nebraska, the son of Charlotte and the late Ronald Rannells. Rannells' father had a heart attack very suddenly in 2001 when Rannells was 22. He is the fourth of five siblings, with three sisters and an older brother. His family has an Irish and Polish background.

Rannells attended Our Lady of Lourdes grade school and then Creighton Prep, an all-boys Catholic school in Omaha. His family lived in the Hanscom Park neighborhood in Omaha.

As a child, Rannells took classes at the Emmy Gifford Children's Theater and performed at the Omaha Community Playhouse and the Firehouse Dinner Theatre and the Dundee Dinner Theatre. Rannells was 11 when he did his first play. He did community theater with Conor Oberst. Rannells also did voice-over work and commercials, including a 1996 Grease spoof with Amy Adams.

Rannells moved to New York City in 1997 after high school, studying theater at Marymount Manhattan College for two years before he started auditioning full-time and was landing roles.

For about three years, from 2001–04, he worked with 4Kids Entertainment, a New York City animation production company, where his Omaha voice-over work served him well. He also directed a couple of video games, "Kirby" and "Sonic the Hedgehog."

As a voice actor, Rannells appeared in several 4Kids and DiC television programs and video games, such as Yu-Gi-Oh! Before winning his first Broadway role, Rannells took part in a number of regional theater productions, including Hedwig and the Angry Inch, Miss Saigon, and Thoroughly Modern Millie. For his turn as Hedwig at the Zachary Scott Theater Center in Austin, Texas, in 2002, Rannells was nominated for and won for best actor in a musical at the B. Iden Payne Awards in September 2002, which honor outstanding achievements in Austin theater. In 2006, he won the role of Link Larkin in the Broadway production of Hairspray. This was his first Broadway show, what he considers his big break. Rannells followed this with some regional performances.

Rannells played Bob Gaudio in the First National Tour of Jersey Boys. His last performance with the tour was on December 6, 2008, in Toronto. In January 2009, he reprised the role of Gaudio in the musical's Broadway production.

Rannells originated the role of Elder Price in The Book of Mormon, a musical written by South Park creators Trey Parker and Matt Stone and Avenue Q composer Robert Lopez and Jeff Marx. For his performance, he was nominated for the Tony Award for Best Leading Actor in a Musical. He won the Grammy Award for Best Musical Theater Album for his performance in the musical's Original Broadway Cast Recording. His last performance was June 10, 2012.

Rannells played a stripper in the 2012 film Bachelorette and played a lead character, Bryan Collins, in the 2012–13 television series The New Normal.

Rannells temporarily replaced Jonathan Groff in the role of King George III in Hamilton on Broadway from October 27 to November 29, 2015, while Groff fulfilled pre-arranged filming commitments.

Rannells played the role of "Whizzer" in the Broadway revival of Falsettos directed by James Lapine. He was joined by Christian Borle and Stephanie J. Block who play Marvin and Trina, respectively. The musical ran from September 29, 2016 (previews) to January 8, 2017.

Rannells is openly gay. He knew he was gay by high school. Rannells said he came out to his family when he was 18, but by then they had already figured it out. He also came out to his theater friends but not the people at his all-boys Catholic school. Rannells currently lives in New York City after temporarily relocating to Los Angeles to film The New Normal. He shares his life with actor Mike Doyle.