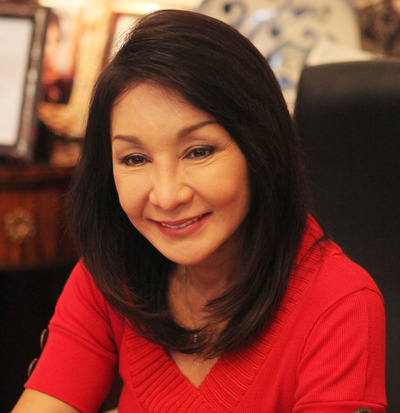 Gwendolyn is the eldest daughter of Pablo P. Garcia and Judge Esperanza “Inday” Fiel-Garcia, who had eight children (four sons). Her youngest brother, Pablo John Garcia is a lawyer-congressman. Her brother Byron has been a security consultant for the Cebu Provincial Detention and Rehabilitation Center (CPDRC), which caught global attention in 2007 for its rendition of Michael Jackson's "Thriller" featuring the its inmates. Her brother Winston is the former manager of the Government Service Insurance System (Philippines).

Garcia was a consistent honor student in elementary and high school at Cebu's St. Theresa's College. She previously earned her Bachelor of Arts degree in Broadcast Communication from the University of the Philippines, Diliman. She was awarded with the Honorary degrees of Doctor of Humanities from the Cebu Normal University (CNU) and Doctor of Philosophy in Technology Management from the Cebu State College of Science and Technology (CSCT).

Prior to being elected as governor, she was responsible for instituting various reforms at the Cebu Provincial Capitol as Consultant on Systems Promotion and Development for three years. Earlier, she was Consultant on Financial Affairs and assisted the then Governor Pablo Garcia in effectively expanding the Province's coffers.